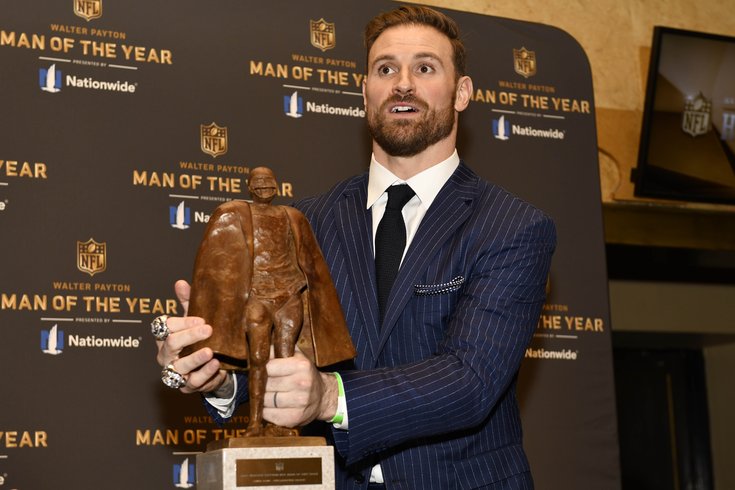 Chris Long will be remembered as much for his off-field contributions as his achievements on it.

Late Saturday night, Philadelphia Eagles defensive end Chris Long ended all questions about whether or not he would be playing in 2019, as he announced his retirement via Twitter.

Cheers. Been a hell of a journey. Eleven years and I can honestly say I put my soul into every minute of it. Highs and lows. I’ve seen them both and I appreciate the perspective. Gratitude and love to those who lifted me up. pic.twitter.com/Ap8zi73Ifl

Long will be remembered as much for his off-the-field contributions as his actual play on the field. This February, he was named the 2018 Walter Payton NFL Man of the Year.

During Long's first season with the team he donated his entire salary — worth about $1 million — to support education in cities where he has played, including Philadelphia, St. Louis and Boston. And in 2018 he donated a quarter of his salary to "First Quarter for Literacy" to donate books and mentoring services to families in Philadelphia. Long also promised to match any other player that would donate.

And after winning the Super Bowl last season, Long climbed Mount Kilimanjaro to raise money for sustainable water wells in East Africa with some fellow players.

According to the NFL, Long has donated more than $2.25 million in donations to educational equity programs over the last two years.

On the field, Long was a former No. 2 overall pick of the then St. Louis Rams. From 2008 to 2015, Long tasted more than his share of losing, as the Rams went 39-88-1, with no winning seasons, and a point differential of -892 over that span. In 2016, he signed with the New England Patriots and won a Super Bowl. The following year, he signed with the Eagles and won another Super Bowl.

Over his career, Long played in 162 regular season games, collecting 333 tackles and 70 sacks. In his two seasons in Philly, he had 51 tackles and 11.5 regular season sacks. He also made a huge play in the NFC Championship Game that proved to be the turning point, even if it didn't show up in the stat sheet.

The Eagles released the following statement after Long's retirement:

With Long gone, the Eagles' depth at defensive end is a significant concern. It now looks something like this:

Going from Bennett to Curry is a downgrade, and there's no obvious "feel-good about it" candidate to take over Long's role. On paper, the Eagles got worse at DE this offseason.

In Jim Schwartz's heavy DL-rotation scheme, it is imperative that the front four is able to get to the quarterback without the aid of blitzers. The Eagles will still be able to do that when Graham and Barnett are in the game, but the combination of Curry and someone from the "maybe they show something" group could be a significant liability when they go in for their line shifts. If Graham or Barnett go down, the Eagles' pass rush could be in trouble.