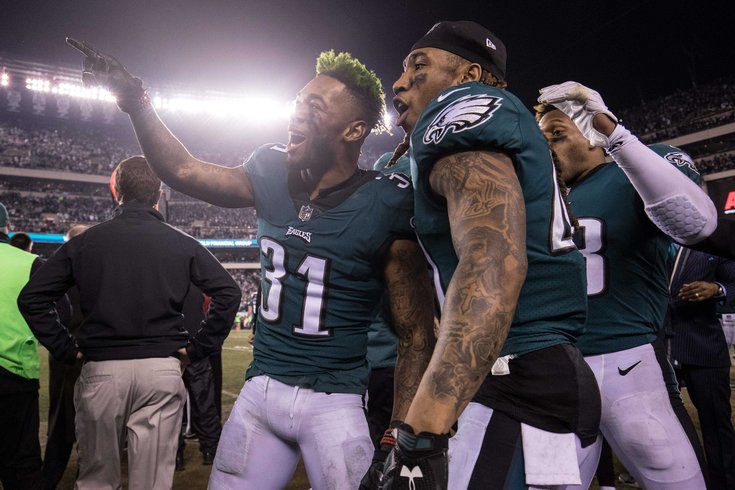 The Eagles won a Super Bowl with Jalen Mills and Ronald Darby as their starters, but they're both recovering from injuries and have legitimate competition nipping at their heels.

Let's take a look at the camp battles that we'll be watching throughout the spring and summer.

By far, cornerback is the most interesting position to watch during Eagles offseason practices. Why? Well, they have six cornerbacks worthy of playing time, and yet, none who should really be considered slam dunk locks to start. They each also have interesting individual stories:

• Jalen Mills is susceptible to the big play, but he's very good in the red zone, he's a very good tackler, and most importantly, he is a Jim Schwartz favorite. He also had a serious foot injury last year that seemed to get worse as the weeks went on. His recovery apparatuses went in reverse order, as he went from a walking boot, to crutches, to a Roll-a-bout.

• Ronald Darby is easily the most athletically gifted of the Eagles' corners, and was expected to leave in free agency this offseason. However, due to a torn ACL in 2018, a strong market didn't develop for him, and he returned to the Eagles on a cheap, one-year deal. Darby is good in coverage, but he's simply a bad tackler. To be determined if he can maintain that athleticism after rehab from that ACL tear.

• Sidney Jones is a player the Eagles have invested a lot in, taking him with a second round pick, knowing full well he wouldn't play his rookie season because of an Achilles tear suffered at his Pro Day. In his first year on the field in 2018 (we'll ignore his meaningless Week 17 appearance in 2017), Jones had a rocky season. He showed flashes of why the Eagles invested in him early in the season, but teams -- notably the Saints and Cowboys -- succeeded in trying to exploit a hamstring injury that Jones was playing with. He ended up missing 9 games (including the playoffs).

• Avonte Maddox did a little of everything as a rookie, playing slot corner, outside corner, and safety. He was one of the true pleasant surprises of the Eagles' 2018 season. The feeling here is that his best fit is at slot corner, but he has already shown that he can be a versatile piece in the Eagles' defense. Maddox's versatility makes him something of the wildcard of the bunch.

• Rasul Douglas had an ugly start to the season, but played very well down the stretch, so much so that he deserves a chance to start in 2019. Many have clamored for Douglas to move to safety, but Schwartz has been consistent is saying that they view him as an outside corner only. It's noteworthy that Rasul clearly put some time in at the gym this offseason.

• Cre'Von LeBlanc: Another pleasant surprise, LeBlanc was picked up off of the Bears' practice squad and did an outstanding job in the slot, given the circumstances. LeBlanc at least earned the opportunity to compete for the top slot corner spot.

My regular readers already know where this is going. You guys/girls can just skip to camp battle No. 3. For the non-regs, you can catch up on the Fort/Sendejo/compensatory pick situation here.

Nelson stunk in training camp, and the Eagles released him. For their mistake, the Eagles incurred a dead money hit of $600,000. On the bright side, by cutting Nelson, he no longer counted toward the compensatory pick formula, and the Eagles were able to preserve a sixth-round comp pick that they otherwise would have lost if if they just kept him.

In the event Fort stinks in training camp (we're certainly not predicting that, to be clear), the cost in dead money would be much higher, at $1.9 million. They would also preserve a higher comp pick, likely a fourth-rounder.

In other words, Fort isn't a lock a make the roster, in my view. He's going to have to earn it.

Sendejo's roster stability, meanwhile, is more tenuous. He signed a one year, $1.3 million contract, with $500,000 guaranteed. If the Eagles cut him, it will cost them $500,000 in dead money. And again, Sendejo's release would result in the preservation of a fourth-round comp pick.

If the Eagles truly need Sendejo, they could just keep him. However, the feeling here is that he is going to have to show that he is significantly better than every single one of the Eagles' reserve safeties to make the team. That group includes Tre Sullivan, Blake countess, Deiondre Hall, and Godwin Igwebuike. Anything less and it would be malpractice to keep him over a fourth-round pick.

3) Shareef Miller vs. Josh Sweat vs. Daeshon Hall vs. Joe Ostman vs. the ghost the Chris Long

Brandon Graham and Derek Barnett are the starters at DE, with Vinny Curry securely locked in as one of the second-team DEs. If Long returns for one last season, there is no camp battle here. He'll be a second-team DE along with Curry.

If I were to do an "Eagles' non-Long No. 4 DE power ranking," it would be as follows:

4) Miles Sanders vs. himself

I say "Miles Sanders vs. himself" because I view the running back position less as a competition, and more as a game of "wait and see" if Sanders can be a major contributor in the Eagles' offense this season.

Jordan Howard will be a contributor this season, particularly in short yardage and red zone situations. Corey Clement will also be a contributor, assuming he is back to 100 percent for the start of the season. Can Sanders not only crack the rotation, but also become something of a go-to back?

The Eagles think he's going to be a three-down back in the NFL. To do so, he'll have to (a) improve in pass protection, (b) show that he can be a contributor as a receiver out of the backfield, and (c) not fumble as much as he did at Penn State. When asked if Sanders can do those things, Howie Roseman was confident that running backs coach Duce Staley will be able to coach him up, while also citing Brian Westbrook and LeSean McCoy as other running backs who overcame those deficiencies coming out of college.

But, it's a lot easier to hand-waive those concerns away, than it is to actually, you know, correct them. Sanders will find it difficult to get on the field if he struggles in pass protection. He certainly won't see the field if he puts the ball on the ground. OTAs and training camp will be his opportunity to show that he deserves to be part of the weekly game plans.

In my view, Sudfeld's importance to the Eagles' 2019 season has been under-discussed, as there's a good chance the Eagles will need him at some point this season. Sudfeld has been groomed behind the scenes for two years now, and he showed encouraging signs in the preseason games last year. The believe here is that he's ready to be the No. 2 quarterback.

At the NFL Combine, Doug Pederson said that the Eagles could bring in competition for Sudfeld, either in the form of a rookie draft pick, or a veteran free agent. They did both! Uh, I guess. The Birds drafted Clayton Thorson in the fifth round, and signed Cody Kessler after he was released by the Jaguars.

If Sudfeld can't blow that competition away, that would be reason for serious concern.