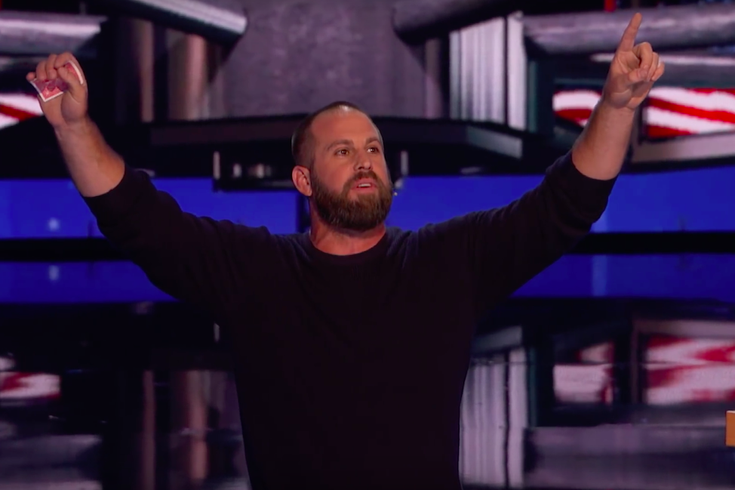 Jon Dorenbos during his final solo performance on "America's Got Talent."

If you watched Jon Dorenbos' performance on Tuesday night's finale of "America's Got Talent," then you're likely familiar with the Eagles long-snapper's backstory and how the tragic death of his mother -- at the hands of his father -- led to him discovering, and ultimately being saved by, magic.

Dorenbos may have finished in third, but all four of the judges seemed legitimately moved by his message and how he was able to bring that to his performances. In case you missed the emotional final trick, here it is again:


On Thursday, less than 10 hours after the results were announced live in Los Angeles, the longest-tenured Eagle was back at NovaCare for practice. It was a hectic few days for Dorenbos, and just listening to him explain his return trip was enough to give me an anxiety attack.

Crazy 72 hrs for Dorenbos, who didn't fly private (or even 1st class) on redeye home.

He had middle seat in coach. pic.twitter.com/aPLhHFbqkt

But Dorenbos wouldn't have preferred it any other way -- well, except for one that ended with him winning instead of 12-year-old Grace VanderWaal -- even if it meant getting a hard time from some of his teammates.

.@JonDorenbos on why after one @nbcagt performance, his Eagles teammates only wanted to talk about his hairline... pic.twitter.com/o5q1x0VaIO

Perhaps the best story that self-proclaimed TapeFace fan Jon Dorenbos told involved one of the more difficult judges to please, Simon Cowell. It also happens to be "the highlight of his performing career."

Thanks to the trick above, which involved Cowell writing down the name "Eric" on the card he picked, there will forever be a reminder of Dorenbos (and, more importantly, his spirit) in the Cowell residence.

That's good stuff right there. And who knows, maybe one day down the line that will lead to Dorenbos working with Cowell in some other capacity.