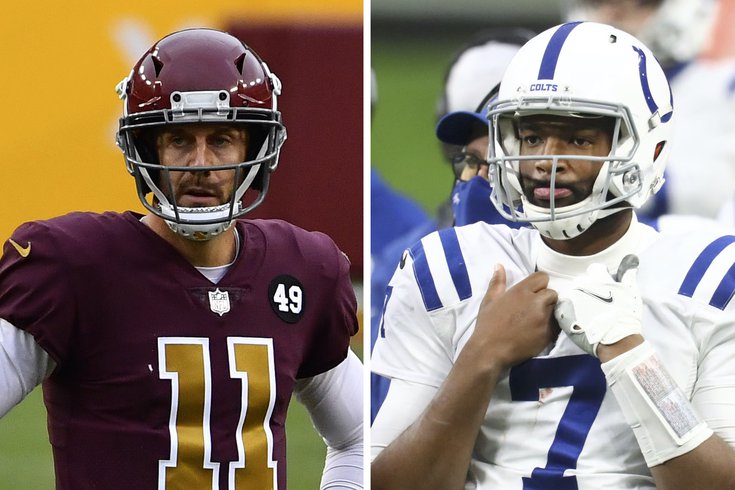 Quarterbacks Alex Smith and Jacoby Brissett could be options for the Eagles in free agency.

We're now less than two weeks away from the real start of the NFL offseason, which will come when the legal tampering period opens on March 15. Two days later, on March 17, the new league year starts, free agency gets underway with players allowed to sign new deals, and trades that have been agreed to this offseason (like Carson Wentz to the Colts) will become official.

But that also means the Eagles have just two weeks to shed over $40 million in salary cap space, a task that, while difficult, won't be impossible for Howie Roseman and Co. to accomplish. In fact, it might be even easier than it looks.

There will be plenty of big decisions needing to be made in the coming weeks about which players the team wants to keep on the roster while they try to rebuild this thing following a 4-11-1 season that ended with them firing their head coach and trading away their top (albeit benched) quarterback. The teardown could happen quickly — in fact, it's already begun — but the process of building it back up will take much longer. And while some of the moves they need to make to get under the cap are unavoidable, the path they take forward is anything but clear.

Will they turn the keys to the offense over to Jalen Hurts? Will they bring in a veteran quarterback to back him up? Or will they opt to select a quarterback with the sixth overall pick, something that's become a bit of a hot topic in recent weeks as April's draft begins to come into focus? Everyone seems to have an opinion on what the Birds should (and ultimately will) do.

There are a lot of mock drafts bouncing around and bunch of draft projections being written. In my opinion the chances of the Eagles taking a quarterback with the sixth overall pick are close to zero. They will develop Jalen Hurts and sign a veteran backup.

Whether or not the Eagles draft a quarterback or decide to roll with the one they just drafted a year ago, it seems almost certain that the team will bring in at least one veteran quarterback in order to have that type of experience in the QB room for the youngster(s) to learn from.

Yesterday, we wrote about the possibility of the team targeting Raiders backup (and former No. 2 overall pick) Marcus Mariota, who could become a cap casualty in Oakland with the team able to save over $11 million dollars by moving on from Oregon product. If they trade Mariota, the Eagles almost certainly won't be willing or even able to spend that kind of money on a backup QB. But if he's cut, there's a chance they could try to bid for his services in free agency.

There are other, likely less expensive options for the Eagles to pursue in free agency, and that's where we'll start today's edition of What They're Saying...

Over at ESPN, Tim McManus took a position-by-position look at the Eagles and how they can address each in free agency. Obviously they won't be able to make all these moves, but as you'll see later in this post, they'll likely have a lot of openings to fill, so they may need to stick with cheaper options just to fill out the roster given their already difficult cap situation.

At quarterback, they currently have just one player set to return, with Nate Sudfeld headed for free agency. Could Jacoby Brissett be an option for the Eagles? He has a past relationship with new head coach Nick Sirianni and will be a free agent this offseason.

Game plan: With Carson Wentz being traded to the Indianapolis Colts and Sudfeld poised to be a free agent, Hurts is the lone quarterback returning from the 2020 season. It's possible Philadelphia uses the No. 6 overall pick in April's draft on a QB to compete with Hurts, their second-round pick from a year ago. Either way, the Eagles need a veteran presence in the quarterback room. Jacoby Brissett makes some sense given his ties to coach Nick Sirianni from their time in Indianapolis together.  [espn.com]

Then there's running back, where the Eagles already have some returning players, specifically Miles Sanders and Boston Scott, who will be a restricted free agent but is expected to be back with the Eagles. Could they go after a bigger back that they've previously expressed interest in, like say Carlos Hyde?

Game plan: Sanders is the lead back and Scott provides a nice change of pace. The Eagles could still use a bruising third back for short yardage and late-game situations. They showed interest last season in Carlos Hyde, who is once again a free agent.  [espn.com]

The backup QB role is going to be a hot topic for the Eagles this offseason, and given that they only have a second-year, unproven quarterback on the roster, that's not entirely surprising. Marcus Hayes' latest for Inquirer.com lays out the argument that Alex Smith, who is expected to be released by Washington shortly, is the best option for the Birds.

At this moment the Eagles have only one quarterback under contract, so they’ll have to add somebody. Several intriguing players will be available, chief among them Jacoby Brissett, a low-mileage 28-year-old, and Sirianna was his offensive coordinator the past three seasons in Indianapolis. There’s also Cowboys failure Andy Dalton; hairy genius Ryan Fitzpatrick; Joe Flacco, whose last good year came before Trump was even a candidate; Chip Kelly mirage Marcus Mariota; as well as Tyrod Taylor and C.J. Beathard, the NFL’s current embodiment of “meh.”

None fits as well as Smith fits with the Eagles’ current quarterback, who has thrown just 148 passes in the NFL, completed just 52% of them, and, worse, completed passes to the other team 2.7% of the time.

Jalen Hurts remains very much a project. There are no QBs in the draft other than Trevor Lawrence who project to be better than Hurts, so there is no need to draft a QB early. [...]

The Eagles might be a circus in 2021, but Smith has seen it all. The No. 1 overall pick in 2005, Smith sat behind Colin Kaepernick, Dwayne Haskins, and Kyle Allen. He’s been traded to make way for Kaepernick and Patrick Mahomes, and apparently, he’ll soon be cut to make way for Taylor Heinicke, an undrafted journeyman with 77 NFL passes.  [inquirer.com]

Sticking to the script

The Athletic's Zach Berman also thinks the Eagles should make a play for Jacoby Brissett. At least, that's part of the offseason plan he laid out recently.

His 10-step plan includes some expected moves, like getting rid of Alshon Jeffrey and Malik Jackson, trading Zach Ertz once the new league year starts, and restructuring several veteran contracts. There are also some very interesting suggestions in there, like trading away Brandon Graham and Andre Dillard after June 1.

But here's one I haven't seen getting a ton of attention this offseason, and it's one that could go along way toward helping their cap situation — although the on-field implications could be disastrous. The Eagles could trade last year's prized offseason addition, cornerback Darius Slay...

Most of the Eagles’ best players can’t be traded before June 1 if the Eagles are seeking cap relief. Slay is an exception. The Eagles could save $6 million (and take a $9.75 million cap hit) if they traded their No. 1 cornerback. Slay’s value on the trade market last year was a third-round pick and fifth-round pick. If the Eagles could move Slay, it would help their draft inventory and cap picture. Then again, Slay is 30 and has $12 million guaranteed in 2021. So a team must believe he’s still an elite cornerback. With the Eagles rebuilding and changing schemes, a potential trade would make sense. This is a situation in which the compensation must be worth it, though, because the Eagles aren’t flush with starting cornerbacks and don’t need to move on from him.  [theathletic.com]

This, however, presents the same short-term issue as trading Zach Ertz. Unfortunately, the Eagles won't be able to trade either until after March 17, which won't help them in their quest to get below the cap before the new league year begins. Even if they had a trade agreed to in principle, it wouldn't be able to be executed until after the new league year begins, and thus the player (in this case Ertz or Slay) would still could against the cap even if the deal was finalized exactly at the moment the calendar flipped to March 17. It's actually a pretty dumb rule when you think about it.

Then there's this suggestion from Berman, which is wild when you first read it, but actually makes sense the more you think about it: the Eagles should let all 12 of their unrestricted free agents walk. Every. Single. One.

The Eagles have 12 unrestricted free agents: Jason Peters, Jalen Mills, Nate Sudfeld, Nickell Robey-Coleman, Vinny Curry, Hassan Ridgeway, Richard Rodgers, Cre’Von LeBlanc, Duke Riley, Corey Clement, Rudy Ford and Nate Gerry. The Eagles shouldn’t bring any of them back. The organization will have limited cap flexibility as it is, and the financial cost and opportunity cost with every transaction is significant. If the Eagles are signing a player for X, would that money, cap space and playing time be better allocated elsewhere? With new schemes on offense and defense, there’s less of an advantage in re-signing their own players. The benefit is that the Eagles’ management knows them and has seen how they work, how they learn and how they function in the locker room. But this is also a time for roster transition. Move on and see if they can find upgrades elsewhere.  [theathletic.com]

And, finally, an update on Duce Staley, whose tenure as an Eagles assistant unceremoniously came to an end earlier this year. He's now with in Detroit, and it appears new Lions head coach Dan Campbell is willing to give him the kind experience the Eagles never seemed willing to offer.

Campbell also said that Staley’s title as assistant head coach would not be empty, stating he would lean on him when it comes to making decisions about the team, including personnel and future plans.

“I told him, ‘You’re not going to be a token assistant head coach,” Campbell said. “I’m going to use him. We had him in during our player evaluations on the whole offense and defense — though he wasn’t able to be in there very long because he had to go back with [offensive coordinator Anthony] Lynn and work offensively. But I’m going to keep him abreast of the cap and things of that nature, what we’re trying to do with free agency.”  [nj.com]

Maybe the move will actually wind up being a blessing in disguise for Staley.