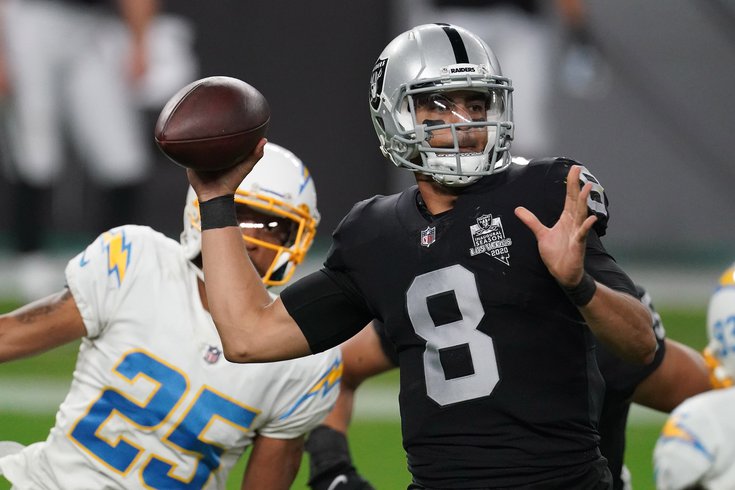 The Carson Wentz saga may be over for Philly, but the quarterback questions are only beginning.

See, when the Eagles had Wentz — despite all the drama that leaked out of the locker room over the last few seasons — they at least knew who their starting quarterback was. There's some comfort in a team coming into camp knowing who the starter is going to be, and allowing that quarterback to develop the best rapport possible with his supporting cast. And they had that with Wentz, even after taking Jalen Hurts with the 53rd pick in last year's draft.

This year? There's no such certainty. While Hurts is the lone quarterback on the Eagles roster at the moment, it's hard to envision him as the no-doubt starter when the Birds open their season in September after just four starts in 2020. At least right now, with so much of the offseason still ahead of us and the Eagles reportedly looking to bring in competition to push the second-year QB. There's certainly an argument to be made that based on where the Eagles drafted him, the impact that had on their team last year and the small sample size we have so far that Hurts should absolutely be given every chance to succeed in 2021 — and that includes being given the chance to start a full season. How else are the Eagles going to know what they have in the former Heisman finalist?

But that's where things get interesting, because so far this offseason the talk of the Eagles possibly using their sixth overall pick on a quarterback has only been intensifying. While we've gone on the record saying that's a bad idea (twice actually), there's no denying that the Eagles are in a prime position to take a quarterback in the draft, one they may not get again even if Hurts struggles in 2021 and they decide he's ultimately not the longterm answer. There are several quarterbacks believed to be worthy of Top 10 picks, with some of that obviously a part of the pre-draft hype machine that more often than not prioritizes quarterbacks, knowing that the teams picking at the top of the draft are often the ones most in need of QB upgrades.

But the Eagles could also opt to address the QB spot through free agency, likely finding a veteran player who can both compete with and push Hurts in camp but can also serve as a mentor once the season begins. And one of those options could be a former starter and a guy many Eagles fans were hoping would wind up in midnight green a year before the team drafted Wentz.

Here's more from The Athletic's Ben Standig, who included the following in a story about Washington's offseason plans beyond Alex Smith, who is expected to be released before free agency begins.

Of those three [Mariota, Mitch Trubisky and Teddy Bridgewater], Mariota has the best chance to change teams, perhaps within the next week or at least before free agency opens later this month. And, while Philadelphia wouldn’t seem like an obvious landing spot — Jalen Hurts remains, and Mariota and Carson Wentz are repped by the same agency — one prominent league source said to keep an eye on the Eagles if Mariota is traded or released.  [theathletic.com]

And there's a good reason to believe the Raiders will move on from Mariota this offseason. Why? Follow the money...

According to OverTheCap.com, the 27-year-old former No. 2 overall pick will count for $11.35 million against the cap this season for the Raiders — but they can save all of it if they trade or cut him at any point. (Wait, a QB without a huge dead money cap hit? Is that even allowed?)

Given that amount of money, it would make more sense for Mariota to be released than traded, as that's a lot of money to be paying a backup quarterback and teams may balk at that price on the trade market. The only way that would work would be if a team was considering bringing him in as the starter, which seems like a long shot at the moment. If the Raiders cut him, however, teams would then be allowed to negotiate a less costly deal with Mariota. And that's good news for the Eagles, who 1) don't have a ton of money to spend this offseason to begin with, and 2) don't want to give up any draft capital they don't have to while the team is trying to rebuild. Being able to sign Mariota to a more team-friendly deal in free agency might be the only way to make it work.

Another reason why Mariota would be a nice complement to Hurts would be their similar styles of play. Both quarterbacks are dual threats, with a ground game to back up their passing.

In four and a half seasons in Tennessee (before being benched in favor of Ryan Tannehill and signing with the Raiders last offseason), Mariota was 29-32 as a starter, completing 62.9 percent of his passes while throwing for 76 touchdowns, 44 interceptions and an average of 209.6 yards per game. He also added 22.2 rushing yards per game and 11 rushing touchdowns on 3.8 attempts per game. Even in his lone appearance last year in relief of Derek Carr, Mariota went 17-of-28 for 226 yards, 1 TD, 1 INT and rushed for 88 yards and another touchdown.

Having a backup with a similar skillset to the starter allows for some interchangeability, and prevents a young coaching staff from needing to completely re-work the offense to fit the backup should the starter misses time with an injury.

Mariota won't be the only option if the Eagles look to bring in a low-cost veteran backup. Tyrod Taylor is another dual-threat QB that could draw some interest from Howie Roseman and Co. as a backup option who would not only push Hurts in camp, but would also be a mentor in the locker room.

If Mariota, Taylor and backup top options are signed by the time the NFL Draft rolls around in late April, then there's a good chance the Eagles look to address the QB position then. But if they sign one a backup QB first — free agency opens in two and a half weeks — it will be a strong sign that they're going to give Hurts a legit chance to prove he deserves to be the team's quarterback going forward.