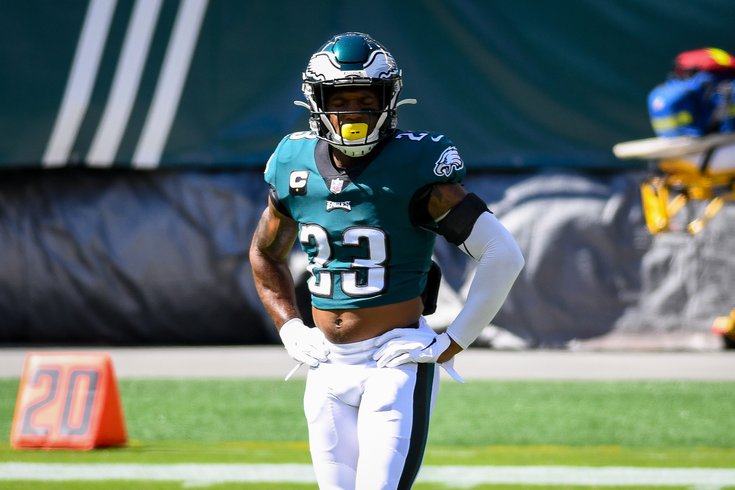 The Eagles win over the Saints on Sunday was a big one for several reasons. It was Jalen Hurts' first NFL start — and the rookie performed well in the upset victory. It kept the Eagles' playoff hopes alive for those who still care about such things. And it again showed how important the defense is to the success of this football team while much of the attention this year has been focused on the offense.

The win, however, also came with a price. And it's one that may prove costly as the Eagles, currently a game and a half out of the division lead, look to win the lowly NFC East.

By the time the fourth quarter rolled around on Sunday, the Eagles were down to just 25% of their secondary. Rodney McLeod, Darius Slay, and Avonte Maddox all left with injuries, leaving converted safety Jalen Mills as the only healthy starting defensive back, and even Mills was forced to move back to cornerback. With Taysom Hill leading the other offense, the Birds were able to hang on and complete the upset, but their road could be a lot more difficult moving forward, head coach Doug Pederson revealed on Monday morning during his weekly day-after press conference.

According to Pederson, Rodney McLeod, who is not only a veteran leader inside the locker room but has been one of the best Eagles on the field this season, is done for the season after tearing his ACL.

For McLeod, that's his second ACL tear in the last four years after he originally tore his other back in 2018.

And that's just the tip of the iceberg for the Eagles' secondary woes. They'll also be without starting cornerback Avonte Maddox for the foreseeable future after he suffered a knee injury in the second quarter of Sunday's win.

"Avonte Maddox will also miss some time here in the next couple of weeks," Pederson told reporters on Monday.

The team could also be without fellow starting CB Darius Slay, who suffered a head injury against the Saints.

"Darius Slay is going to be in the concussion protocol," Pederson added, "so I can't comment further on that other than that he is in the protocol."

His status will likely remain up in the air as the week goes on. But with Maddox already ruled out, the Eagles will need to hope Slay can go in Week 15. They'll be traveling to Arizona to face former first-overall pick Kyler Murray and one of the most dangerous wideouts in the NFL, DeAndre Hopkins.

With Maddox out and McLeod out, and Slay's status up in the air, the question then becomes what Jim Schwartz will do with his secondary. Against the Saints, with that trio of players sidelined, the Eagles went with Jalen Mills and Nickell Robey-Coleman at cornerback, with Kevon Seymour coming on in nickel packages (he played outside and NRC moved back to the slot). At safety, the Eagles had Marcus Epps playing in the McLeod role with rookie K'Von Wallace taking over the role typically filled by Mills.

No matter how it shakes out, this is looking like a week where the Eagles could bring in some outside help or, at the very least, call up some guys from the practice squad.

It wasn't all bad news for the Eagles, as Pederson also said that Josh Sweat, who had a pair of sacks and a forced fumble on Sunday, is expected to return against the Cardinals.

"Josh Sweat is going to be OK," Pederson said "He just got chipped by the running back in the game on his right side, right arm area. He's going to be OK for the game."

While it might not seem like much consolation given the injuries above, Sweat has been a bright spot for the Eagles this season and has done some damage despite being a rotational piece along Philly's defensive front. His speed will likely come in handy against Murray. It certainly did against Taysom Hill.

Currently, the Eagles are heading into Arizona as a 5.5-point underdog, according to TheLines.com. It will be interesting to see if these injuries move that number at all.

MORE: Report: Eagles have no plans to trade Wentz this offseason