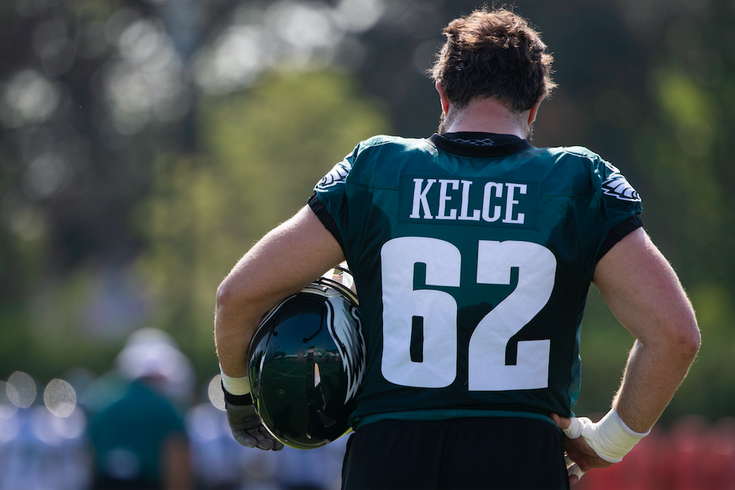 Philadelphia Eagles center Jason Kelce wandered to the wrong sideline during the team's 24-20 loss to the Atlanta Falcons on "Sunday Night Football." In an Instagram post, Kelce explained what happened and highlighted the seriousness of the NFL's concussion protocol.

The Philadelphia Eagles will look to regroup from their injury-plagued loss to the Falcons when they return home this Sunday to face the Detroit Lions.

While the team and fans look to put what happened in Atlanta behind them, there is at least one moment in the game that All-Pro center Jason Kelce felt a need to revisit.

At the end of an Eagles drive that crossed from the first to the second quarter, Kelce jogged off the field to the wrong sideline. Al Michaels noted on the broadcast that it was an unusual thing to see from a player and that Kelce would likely need to be screened for a concussion.

By the next Eagles drive, Kelce had cleared the NFL's concussion protocol and returned to the game. In the locker room after the loss, he explained that he simply got confused because of the team's change in direction in the middle of a drive. Later, in an Instagram post, he elaborated on what happened and why it matters.

I don’t agree with everything the NFL does. They have gotten a lot of things wrong in the past, and I’m sure they will continue to get things wrong in the future. But, I believe the concussion protocol is something they are getting right. . PS: I’m a dumbass for going to the wrong sideline

"A lot of people have hit the NFL hard over not caring about its players, but as you can see from the picture, the NFL is taking concussions and head trauma very seriously," Kelce said.

The reason Kelce got confused is because he was overthinking a look the Falcons gave the Eagles on a third down play that ended the drive. He was running through things he could have done differently in his mind and simply lost his sense of direction.

"Someone from the NFL obviously flags that as odd behavior and I go into the concussion protocol," Kelce continued. "A team doctor and an independent neurologist asked me a series of questions, gave me a physical exam and also watched the tape to see if I hit my head at all on any of the plays before that."

Within five minutes, it became clear that Kelce was not concussed.

"I don't really think they care that much about player safety as much as they are probably just covering their own asses from a liability standpoint," Kelce said. "But regardless, they are taking this very seriously, and erring on the side of caution when it comes to anything involving concussion-like symptoms."

Kelce was one of five Eagles evaluated for concussion-like symptoms during Sunday night's loss. If there's a positive to take from Kelce's case, it's that he got pulled aside because he was so immersed in the game.

"I don’t agree with everything the NFL does. They have gotten a lot of things wrong in the past, and I’m sure they will continue to get things wrong in the future," Kelce added in a comment on his post. "But, I believe the concussion protocol is something they are getting right. PS: I’m a dumbass for going to the wrong sideline."