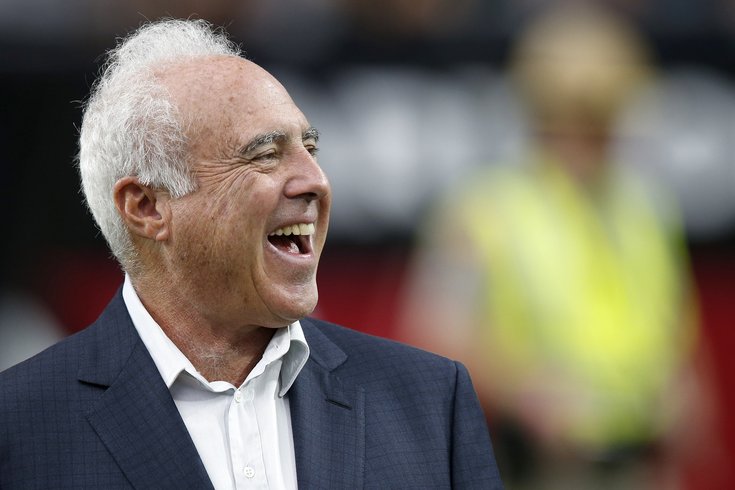 We don't hear from Eagles owner Jeffrey Lurie very often, which makes the rare times he does speak all the more intriguing.

On Friday, he spoke publicly for the first time since March and the topics up for discussion ranged from his assessment of Sam Bradford to his love of The Grateful Dead. And he didn't stop there. Lurie even talked Spygate and offered up his explanation for why guys like LeSean McCoy and Tra Thomas accused head coach Chip Kelly of racism after being shown the door. [Spoiler alert: He agrees with what I wrote a month ago.]

Here's a look at what Lurie had to say during his session with the media, just a few days before the Eagles 2015 season gets underway on Monday night in Atlanta:

Does this team have what it takes to be great?

“I don’t know. I have no idea. I think what we have is a really great culture; a really great, hardworking team; a very committed group; great chemistry. [We’ve had a] great summer, excellent preseason, but that doesn’t correlate. You’ve got to play when it’s really primetime, regular season. There’s no correlation between preseason and regular season at all, but what the ingredients are, it looks great. It looks wonderful. But now we’ve got to go out and beat Atlanta.”

More than a few people — including your friend Joe Banner — picked the Eagles in the Super Bowl. What do you make of the hype surrounding this team?

“When you play very well in the preseason, you’re going to probably expect that. But again, it doesn’t mean much at all. I don’t know [what to make of it]. Teams go 0-4 in the preseason and then people think they’re going to miss the playoffs and then they go 12-4 [in the regular season], and vice versa. It’s just noise to me. It doesn’t really impact anything. As someone said, I’m onto Atlanta. And, by the way, that’s a tough one because Matt Ryan is one of the best young quarterbacks in the league. He’s 7-0 in opening games, as you know. Unbelievable home record there. So that’s a tough first one.”

What are your impressions of Sam Bradford?

“He’s been everything we hoped for so far — wonderful leader, very bright, obviously the football talent is impressive. Just what we hoped for when we traded for him.”

What’s the importance of having a franchise QB and can Bradford be that guy?

“It’s what you hope for. The scarcest resource in the league is having a franchise quarterback. I think I said in March that the greatest structure an organization can have is not who’s doing what, but it’s having a Hall of Fame, franchise quarterback. That’s the greatest structure. That will rationalize anything else that goes on. And so that’s what you always hope for. That’s why the upside gamble with Sam, we thought the potential was there. It certainly is there. I hope it evolves and he can stay healthy and get better and better.”

What have you gotten to know about Bradford in the last few months since the trade?

ON CHIP KELLY AND RACISM

What do you make of criticisms of Chip [Kelly] from players who have left and said things?

“Some of it’s just been beyond ridiculous. Chip’s a leader in our organization and he’s held to a very, very high standard. And I watch him on the field relate to players. His door is always open — I’ve never even seen that before — and he cares about the people, the players, and I’m just very proud and have complete respect for him as a person and as a coach.”

Did you reach out to LeSean McCoy or Tra Thomas, guys that had been here for a while and you know well?

“I know Chip’s situation really well and, you know— Listen, LeSean and Tra are both really good alumni of our organization — and people say things sometimes when they’re, in a sense ‘rejected.’ They get dejected because they’re rejected and then they say things. I know the way Chip is and I’m very proud of the way he is.”

ON THE FRONT OFFICE CHANGES IN OFFSEASON

How have things been going — i.e. communication — since the overhaul of the front office?

“It’s been great. It’s a good question. You make a significant change and you never know, but the eight months have been fantastic. I think [GM Ed Marynowitz] has been terrific. I think [VP of Football Operations Howie Roseman] has been outstanding doing what he does. And Chip’s been great leading the way. It’s been that seamless kind of overlay of player personnel and coaching we’d hoped for. And that’s what it takes to build a roster; to have that overlay and to reflect what the vision is. It’s been going great.”

What exactly does Howie Roseman do?

“Howie does a lot. He does a lot. He’s in charge of all the salary cap management, the negotiations, a lot of strategic initiatives. And he’s also very responsible for a lot of the decisions we made in terms of choosing a head coach, player personnel, a lot of things. So he’s a trusted adviser.”

Did you read the recent ESPN story on Spygate?

Did it renew any concerns that you were possibly cheated out of a Super Bowl?

“There’s a lot of ways to approach that. I think No. 1, I would just say factually, I personally don’t have enough information to make that determination. I look back on that game, the Super Bowl, as some missed opportunities. We turned the ball over, and I tend to focus on that. But there’s always been talk of that, from the time the game finished and continued on until now. I’ve moved way on since then and my focus is Atlanta and there’s nothing we can do about that.”

What’s your level of confidence in Roger Goodell as NFL Commissioner?

“I have a lot of confidence in Roger. There’s a couple things that a commissioner in any sport has to really accomplish. One, obviously, is growing the business, and that’s been great. But two other really important aspects are working on improving the health and safety of the sport, No. 1. And No. 2 is making sure we have a level playing field. We’ve go to absolutely try to figure out with all 32 teams if there’s any advantage being taken. Sometimes it falls on the commissioner, in an unpopular way, to manage that process. It’s a tough process when you’re investigating teams, players, players that have been phenomenal. That’s not an easy thing. Whatever evolves, I think we’ve got to have a very strong league office to investigate everything. Otherwise, no individual team will ever be able to do that on their own. They depend on the league.”

Does there need to be a more independent investigator than Goodell?

“Now you’re sort of getting into labor law a bit and I’ve never wanted to be a lawyer. I’ve never studied labor law. If I ever had a choice of studying labor law or listening to The Grateful Dead, I’d pick listening to the Grateful Dead. I’m not one who can really comment on that, but you just, as a team and as players, we need to know the function, not the who’s doing what. We need to know that there’s always a completely level playing field for this sport.”

And you fully support Goodell?

“I fully support Roger. And yes, can we tweak the administration of it in some way? Absolutely. You can tweak everything. There’s ways to accomplish it, but what I never hope we would get to is to not have a league being able to fully investigate that aspect. And again, that’s every league, not just the NFL. You’ve got to have a strong league, because it comes down to the fact that us, the players, we’re dependent on that. We can’t investigate ourselves.”

At some point is there a perception or credibility problem with the commissioner at this point?