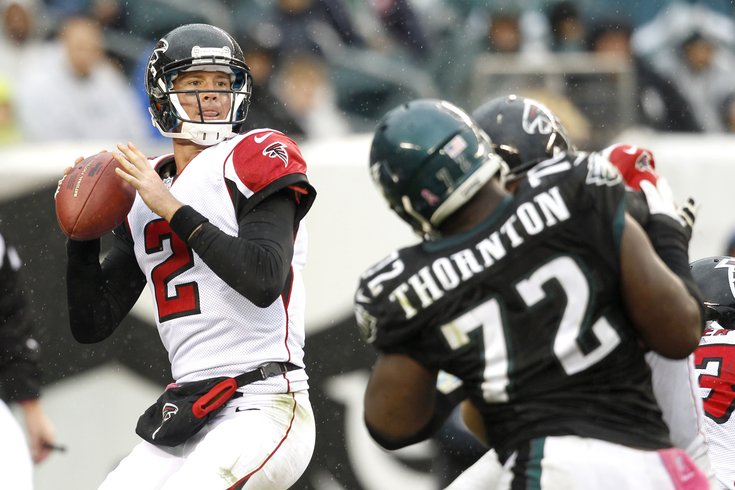 Matt Ryan drops back to pass as Cedric Thornton tries to get to the Falcons QB.

Week 1 of the NFL season is upon us. Unfortunately for Eagles fans, they'll have to wait an extra day before watching their team take the field.

But if you're anything like me, that means you get to spend Sunday watching the RedZone channel and checking fantasy scores and when Monday night rolls around, you'll be able to give 100 percent of your attention to the Birds. In the meantime, here are our predictions for Eagles-Falcons, as well as the current betting lines and how you can watch or listen to the game.

The Eagles should be able to win in the trenches in this one. Defensively, their talented pass-rushing ensemble will be facing a banged-up Falcons OL. Offensively, they'll be protecting Sam Bradford against a team in which all their defensive linemen (starters and reserves) combined for 8.5 sacks a year ago.

A big focus of the Eagles this season is limiting big plays in the passing game. If they can keep Julio Jones and Roddy White in front of them, forcing the Falcons to sustain long drives, the defensive front seven should make enough plays to keep the Falcons from lighting up the scoreboard.

Meanwhile, the Falcons' defense is in a transitional phase with a lot of new bodies in place after being awful a year ago. Seeing the Eagles' fast-paced offense right off the bat is going to be a tough task for them. The Eagles outscore the Falcons comfortably, 38-24.

It will be weird to see the Falcons without Mike Smith, who can go back to being Betty Draper’s father. When Dan Quinn was the defensive coordinator of the Seattle Seahawks last year, his troops shut down Chip Kelly’s offense in an important December matchup. There is no doubting that the rookie head coach knows the blueprint, but the Legion of Boom didn’t quite fly cross-country with him. Can Quinn get the retooled Falcons defense to slow down Sam Bradford enough for Matt Ryan, Julio Jones, and co. to win a shootout?

It’s certainly possible, but my best guess is not quite enough. The Falcons were the worst defense in the league last year according to Football Outsiders’ DVOA metric, dead last. They did nothing to actually answer any of the toughness questions they spent practically all of “Hard Knocks” answering. The defense will be better, but this Eagles offense on a fast track isn’t an easy first test. I think Darren Sproles has a big game catching passes, and the Eagles’ strong front seven does enough against a shaky Falcons’ offensive line to make sure Ryan can’t totally pick their own suspect secondary apart. If the former Penn Charter star consistently gets time, the calculus obviously changes.

The trio of Julio Jones, Roddy White and Matt Ryan scare the crap out of me. Just like the Eagles, they can score, and score quickly. While Chip Kelly may prefer a quicker pace, there’s no doubt the Falcons can move the ball down the field in a flash in their own way: big plays. And with a re-tooled Eagles secondary that still has plenty of question marks, defensive coordinator Bill Davis will need to rely on the team’s strength (the front seven) to put pressure on Ryan and limit their downfield passing that way. And without much threat of a ground attack— can you name the Falcons starting running back? — the Birds should be able to drop an extra guy into coverage if necessary.

On the other side of the ball, we’ll finally get to see if all those offseason changes — Nick Foles out, Sam Bradford in; LeSean McCoy out, DeMarco Murray and Ryan Mathews in; Jeremy Maclin out, Nelson Agholor in; and two new guards on the offensive line — will pay off. It’s Bradford’s first regular season game since October 2013 and he has played less than a half of football with his new teammates, so some early rust wouldn’t be a shocker. But during the preseason, there was no sign of rust or discomfort from the former No. 1 pick, so it also wouldn’t be surprising if they come out firing.

And then there’s new Falcons coach Dan Quinn, who has overhauled a terrible Falcons since his arrival from Seattle where he was the Legion of Boom’s coordinator. Atlanta’s D will be better than last season — they were last in the league in yards allowed and 27th in points allowed in 2014 — but, like the Eagles offense, have a lot of new faces and could take a few weeks to gel. And Kelly’s uptempo offense isn’t exactly an ideal matchup in Week 1.

There’s a reason this game has the highest over/under of any Week 1 NFL matchup. Neither team’s ability to score points is in question here. But I think the Eagles are the more well-rounded team, and that will show on Monday night.