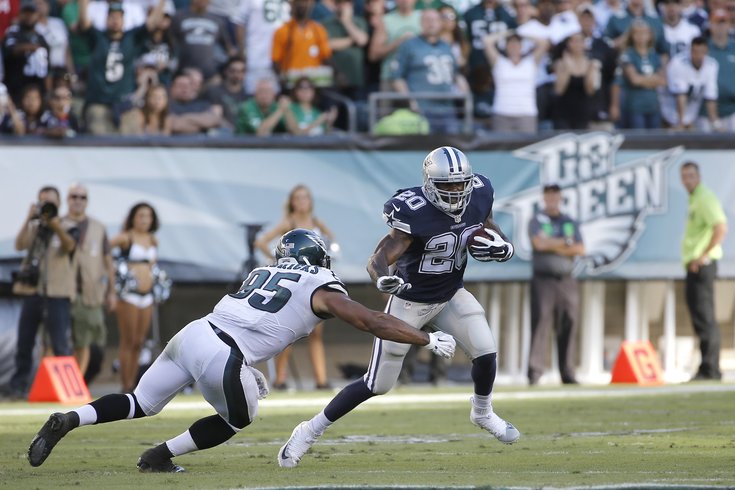 The Eagles' depth at ILB will be tested with Mychal Kendricks and Kiko Alonso both out against the Jets.

Heading into Week 2 against the Cowboys, the Eagles were in outstanding health. However, the brutal nature of the NFL season is already beginning to take its toll, as the Eagles' injury report is beginning to fill up. Here's a look at the Eagles' and Jets' injuries, with analysis.

• ILB Kiko Alonso (knee): Alonso is the Eagles' best cover linebacker. If there's one team where the Eagles can afford to be without Alonso, it's the Jets, who don't have great receiving threats at TE and RB. Alonso's long-term prognosis remains a mystery.

• ILB Mychal Kendricks (hamstring): Well, I guess this is why the Eagles over-did it with linebacker depth. With Kendricks and Alonso out, DeMeco Ryans and rookie Jordan Hicks will be forced to start and rarely come off the field. Hicks was impressive in his first extended action as a pro last week. Ryans made plays on a goal line stand, but struggled in coverage.

• DE Cedric Thornton (hand): Thornton has a broken bone in his hand, and will be out. He is a quality starter and very good run stuffer.

• DE Taylor Hart (shoulder): Hart has been active in favor of Brandon Bair so far this season. With Cedric Thornton out, Hart would have been the logical player to start in his place. With Hart out, Bair will be forced to play a big role on Sunday.

• RB DeMarco Murray (hamstring): Murray has gotten off to a much-publicized slow start behind what has been a terrible run-blocking Eagles offensive line. The Eagles have good depth at running back in Ryan Mathews and Darren Sproles, but ideally the Eagles would like to get Murray going sooner than later. Murray is expected to play per Ashley Fox of ESPN:

THIS JUST IN: DeMarco Murray will play Sunday vs Jets despite missing practice Thursday (via @AshleyFoxESPN)

• WR Josh Huff (hamstring): Huff was a surprise addition to the injury report on Saturday. While the Eagles have depth at WR, Huff's ability to make plays after he has the ball in his hands is something the Eagles should have tried to utilize more in the short passing game against the Cowboys with the Sam Bradford struggling to get the ball down the field accurately.

• DE Fletcher Cox (groin): Cox is of course one of the Eagles' best players, but he should be a go on Sunday.

• WR Seyi Ajirotutu (concussion, elbow): Ajirotutu is a special tams player only. He'll resume his role as a gunner on the punt team and on kick coverage.

• S Chris Maragos (hip): Maragos has been the Eagles' "nickel safety," as he has entered the game in the Eagles' nickel package, taking over for Malcom Jenkins, who becomes the nickel corner. The Eagles have put Maragos in a position not to fail by often parking him far off the line of scrimmage in nickel sets.

• TE Trey Burton (shoulder): Burton joins Ajirotutu and Maragos among the Eagles' core special teams players who are a little dinged up, but should play.

• OLB Travis Long (ACL): Long was OLB depth, and was lost for the season after tearing his ACL.

• CB JaCorey Shepherd (ACL): Shepherd was poised to have a significant role his rookie season as an option at slot corner before he tore his ACL.

• WR Chris Owusu (knee): Owusu has 4 catches for 55 yards this season. He's the Jets' third WR. If both he and Eric Decker (questionable) cannot go, the Jets will be deep into their bench at WR.

• LB Trevor Reilly (finger): LB depth. Reilly had a sack and a forced fumble against the Browns Week 1.

• CB Darrelle Revis (groin): Some believe he's still the best cornerback in the NFL. Obviously, if Revis cannot go, that is a huge loss for the Jets, although he is expected to play.

• WR Eric Decker (knee): Decker has a TD catch in each of the Jets' first two games. He has 10 catches for 134 yards and 2 TDs in his first two games. Manish Mehta of the New York Daily News is pessimistic about Decker playing:

If Eric Decker (knee) doesn't play, it looks like rookie WR Devin Smith will make his NFL debut. (And it sure looks like Decker won't play)

• RB Chris Ivory (quad): Ivory is the Jets' lead back. He has 34 rushes for 148 yards and 2 TDs this season. His primary backup is Bilal Powell. Zac Stacy is also in the mix, but has been inactive early.

• CB Antonio Cromartie (knee): Cromartie is the Jets' "other" talented starting corner opposite Revis. He appeared on the injury list last week as well, but played.

• OG James Carpenter (back): Carpenter is the Jets' starting LG.

• QB Geno Smith (fist to the grill): Smith could be the #2 QB behind Ryan Fitzpatrick this week.

• OLB Lorenzo Mauldin (concussion): Mauldin suffered a scary-looking head injury Week 1, but is expected to play on Sunday. He has a forced fumble this season.

• WR Devin Smith (ribs): The rookie from Ohio State could be active for the first time in his career with Owusu out.

• CB Dee Milliner (wrist): Milliner was the ninth overall pick in the 2013 draft, but has fallen short of expectations. Still, he serves as depth in a Jets secondary that is battling injuries. Milliner is on IR, with the designation to return.

• S Antonio Allen (Achilles): Allen started 17 games over the last two seasons for the Jets. He is on IR and out for the season.

• DE Sheldon Richardson (weed): Richardson was suspended by the league for violating the NFL's Policy and Program for Substance Abuse. Richardson is one of the best interior defenders in the game. Last season, he had 66 tackles and 8 sacks on his way to the Pro Bowl.