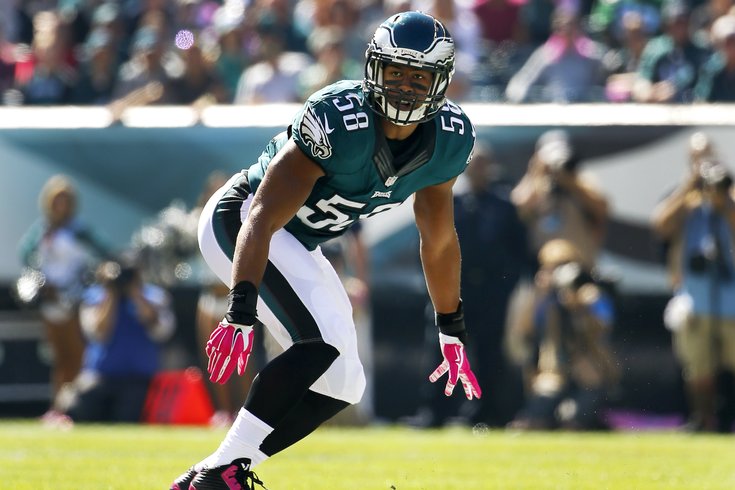 Jordan Hicks, the Eagles third-round pick in this year's draft has been impressive so far this season, much more so than either of the team's first two picks, WR Nelson Agholor and DB Eric Rowe, and has already made a greater impact than last year's top pick Marcus Smith.

The Eagles didn't foresee Hicks getting this many snaps so early into the season, but injuries have decimated their other inside linebackers -- Mychal Kendricks (hamstring), DeMeco Ryans (hamstring) and Kiko Alonso (knee) have all missed time this season -- forcing the rookie out of Texas into action.

"He's up there at the top of the list [of rookies I've coached], he really is," defensive coordinator Bill Davis said Wednesday. "He has been a -- I don’t want to say a surprise, but you never know when you get a rookie. You know you have an intelligent -- we knew when we drafted him, he was a highly intelligent, high-football IQ, good athlete, solid inside backer.

"What you don't know is how they respond to the NFL games, and a lot of times that's where they kind of hit a wall. Even though you have a smart guy, it takes him a year or two to be able to do it on Sundays when it's going fast."

That has not been the case for Hicks.

"In Jordan, the piece that's kind of very -- it's not surprising but it's exciting, that on game day he's as calm as a veteran," Davis added.

Through six games this season, the 23-year-old has played more snaps than any other inside linebacker (mainly because he's the only one who has remained healthy) and is fifth among all Eagles defenders in terms of total snaps (including special teams) according to FootballOutsiders.

Furthermore, Hicks has led all Eagles linebackers in snaps in each of the last four games and was in on 99 percent of the defensive snaps in Monday night's win. But it's about more than just the quantity of snaps; it's about the quality of his play on those snaps, something Chip Kelly attributes to Hicks' maturity and ability to learn from position coach Rick Minter.

"[Hicks] reminds me of veterans, but not so much a rookie. Most rookies are kind of in that backup role and don't shine like he has done so far."

"Jordan is a really intelligent, savvy football player that, as I said before, never really acted like a rookie when he came in here," Kelly said Tuesday. "But, he has really taken to how Rick is teaching in that room right now, and I think our inside linebacker play is a byproduct of that."

That sentiment was echoed by Davis on Wednesday, who struggled to find another rookie linebacker to compare to Hicks.

"Not really [any rookies] -- veterans," Davis said. "He reminds me of veterans, but not so much a rookie. Most rookies are kind of in that backup role and don't shine like he has done so far."

His early, somewhat unexpected success has been immeasurable for the Eagles, who face Cam Newton and the undefeated Carolina Panthers on Sunday night.

Not only has Hicks come up big with turnovers (an INT, a FF and 3 FRs) during a time when the fate of the Birds' season was hanging in the balance, but he's allowed the team to take a more patient approach with Alonso and Kendricks, both of whom practiced -- Alonso was limited -- on Wednesday after being inactive against the Giants.

Second in tackles to only safety Malcolm Jenkins, Hicks has not only impressed his coaches, but his teammates as well. So much so, in fact, that the rookie has already earned a nickname, one that paints him as a younger version of Ryans, the team's defensive leader who has been a mentor to the young linebacker.

Malcolm Jenkins: We call DeMeco “Mufasa” and Jordan (Hicks) “Simba.” When DeMeco went out (vs Giants) I told him “it’s your show now.”

Ryans did not practice Wednesday after injuring his hamstring against the Giants. Following Monday's win, Chip Kelly was asked if he thought Ryans, who had a crucial interception and fumble recovery before tweaking his hammy, was motivated by all the attention Hicks is getting.

"No, I think DeMeco is motivated 24/7," Kelly said. "He’s, and I've said it before, he's our Mufasa; he's the leader of our defense; he's the leader of this football team; he's motivated every day we're around him and every second I'm around the guy. So, he's been an unbelievable mentor to Jordan and there's no one that wants to see Jordan succeed more than DeMeco. I don't think that motivates him; I just think that's the type of guy he is."

And considering the Eagles have one of the NFL's best defenses through six weeks, despite the injuries to their middle linebackers, Hicks' contributions so far this season are without question.

What does remain in question, however, is just how much his role will change if/when Alonso, Kendricks and Ryans are all healthy at the same time. He's certainly earned the right to play -- and there's something to be said about personnel consistency among the Eagles' front seven -- but that doesn't mean his snap percentage won't take a hit once the veterans return.

The Eagles have already re-signed Kendricks, extended/restructured Ryans' deal, and traded their Pro Bowl running back to acquire Alonso. Clearly, they like what they have in those three linebackers.

But they also have to be thrilled with what they've seen out of the young Hicks, because with Mufasa getting up there in age and the inability of all three to stay healthy, Simba's reign may come sooner than you think.