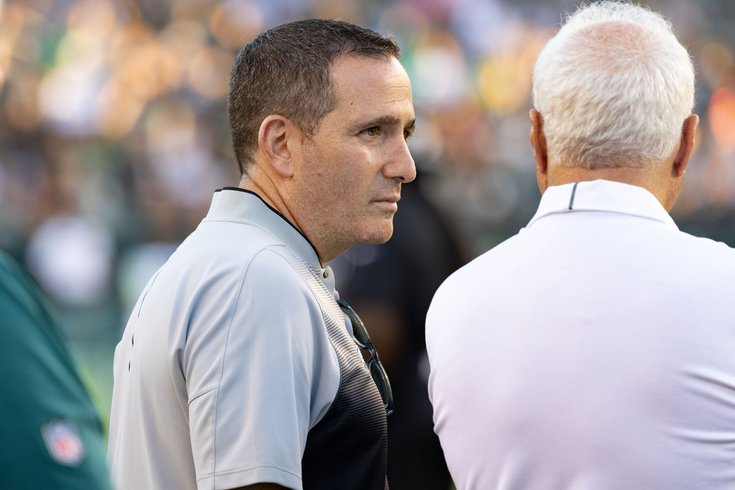 General Manager of the Philadelphia Eagles Howie Roseman looks on during an open practice at Lincoln Financial Field in Philadelphia, Pa. on Aug. 7, 2022.

Question from HarpersTown: Do you believe the Eagles will hold on to more picks and break their trend of only drafting ~5 players per draft if they commit to Jalen Hurts with a long-term deal?

• From 2018 to 2019, the Eagles only made 10 picks (5 each year), the lowest total in the NFL. They had a fantastic hit rate in 2018, when they took Dallas Goedert, Avonte Maddox, Josh Sweat, and Jordan Mailata. Their 2019 draft haul... eh, not as good. It's a dangerous game counting on consistently overperforming on a low number of picks.

• In 2022, they only drafted five players, while trading picks to secure Jordan Davis, A.J. Brown, and an additional first-round pick in 2023.

• In 2023, they currently only have six picks, a total that could become even lower if they make more moves at the trade deadline. However, if their pick from the Saints lands in (or near) the top five, there could be opportunities to trade out for a bounty of picks, especially if the 2023 quarterback draft class is appealing, as many are projecting it will be. That's the easiest path to collecting more picks, if that's a priority.

• In 2024, the Eagles currently hold eight picks. In case you forgot, in addition to the first-round pick the Eagles acquired from the Saints in 2023, they also siphoned off a second-round pick from New Orleans in 2024. But beyond those eight picks, the Eagles will also very likely have a few extra compensatory picks in 2024.

Why is that? Well, they have more scheduled free agents in 2023 than they usually do, including compensatory qualifying players like Fletcher Cox, Javon Hargrave, Miles Sanders, James Bradberry, Isaac Seumalo, Andre Dillard, T.J. Edwards, Kyzir White, Chauncey Gardner-Johnson, and Marcus Epps, among others.

The Eagles should be able to retain some of those players, but many of them will be on new teams in 2023. The challenge for the Eagles' front office in the short-term will be deciding on which of those players they can live without, and how they can adequately replace the more difficult losses. That's a topic for another day. But on the draft pick front, assuming the Eagles lose more players in free agency next offseason than they gain from other teams, they could be in position to collect on several compensatory draft picks in the 2024 draft.

The first year of a new quarterback contract typically has a low cap number, so the Eagles should still be able to spend on other positions in 2023 if they extend Hurts. It will be in 2024 and beyond that they will need to fill their roster with cheaper rookie contracts to help offset the big metaphorical Hurts rock in the salary cap jar, so to speak.

Question from Austin_Jon: Is there a player in the top 5 you could see the Eagles taking with the Saints pick if it winds up being that high? Or is that getting sold to the highest bidder no matter who’s there?

It's still early, but if players like Alabama edge rusher Will Anderson or Georgia interior defensive lineman Jalen Carter are the elite prospects many are projecting them to be, then sure, just go right ahead and draft either of those players. If another team makes a trade-back offer they can't refuse, go ahead and do whatever is best for the team. But because they will have a bounty of picks in 2024 (as currently scheduled), they shouldn't feel the need to take an offer to trade back that's just OK. They can hold out for a "blow us away" package.

Question from bhargrave: Hey Jimmy. Now that Robert Quinn's final two years have been voided, will the Eagles now be able to collect a comp pick if he signs somewhere else?

No, he will no longer qualify as a compensatory free agent after the Eagles and Quinn agreed to shorten his contract.

Question from Office Linebacker: If you got to vote for the MVP of the league as of right now, would you vote for Hurts?

Josh Allen is playing on a different level than everyone else this season. He's the clear-cut MVP if the season ended today. It's probably a better debate between Hurts and Patrick Mahomes for who would be No. 2. I'd probably go Mahomes. But Hurts is no worse than No. 3.

Question from 6-0: After Lane Johnson's injury, do you think a high pick in next year's draft could be used on a tackle as a potential future replacement/current backup similar to the drafting of Jurgens this year?

Lane is under contract through 2025, and my sense is that he doesn't have any immediate retirement plans. He is also an elite player with no signs of decline.

That said, I do believe offensive tackle is a need this offseason. They can use a new swing tackle to develop, though I think that makes more sense on Day 3. The only way I can see them using a high pick on an offensive tackle is if that player can start at guard early in his career, with the potential to kick out to tackle whenever Lane decides he doesn't want to play anymore.

Question from Mac: Why not take a flyer on Odell Beckham? I feel like that trio would be phenomenal together. A.J. Brown, OBJ & DeVonta Smith would be damn near unstoppable.

I like the pairing Quez Watkins and Zach Pascal as sort of the co-No. 3 wide receivers. They both have skill sets that can complement the big three of Brown, Smith, and Dallas Goedert. And yet, those two guys have a combined 12 targets this season.

There's also an argument to be made that Goedert isn't seeing enough targets come his way, given his high efficiency (10.5 pards per target).

The Eagles have a challenge as it is feeding all the mouths in their offense. Adding another player who demands the football would only add to that dynamic. I think their resources are better spent elsewhere.

Also, it's probably worth noting that there are wide receivers available for trade across the league, like Brandin Cooks, Chase Claypool, Jerry Jeudy, A.J. Green, and even TE/WR hybrid Mike Gesicki, and for the first time in years the Eagles aren't being tied to any of them. It's going to take some getting used to not pining for other teams' wide receivers.

Question from Kephas: Is this all setting up for a game between the 13-0 Eagles and the 12-1 Giants, and the Giants win and all of a sudden the 13-1 Eagles are second in their own division? #MyWorstFear

A quick look at the Giants' remaining schedule, and their chances of winning each games, according to ESPN's "Matchup Predictor."

The Giants have an easy schedule, but a lot would have to go right for them for that to happen.

Question from MassEagle: Kadarius Toney to the Chiefs... Immediate thoughts?

Toney was drafted by the previous regime, so they're no allegiance there. It's no surprise at all that they dealt him. That dude must be a major pain in the ass. I'm surprised that they were able to get third- and sixth-round picks for him. I think that's just further evidence that the Giants are now being run by adults.

That said, Toney is super talented. That's a guy that I could see playing very well in Kansas City. Andy Reid sure isn't afraid to take on character concern guys, and he has a history of turning them into productive players.

Question from EEyore: Do you recall that the 2004 Eagles were 7-0 and the 8th game was against the Steelers and they lost in a terrible fashion? T.O. was yelling at Donovan on the sideline that game.

I do. That was a good old-fashioned ass kicking administered by the Steelers. I'm actually surprised that that game hasn't been brought up more this week. Maybe because the Steelers are bad this year and the the 2004 team was a legit Super Bowl contender? Or maybe everyone's attention is on the Phillies. Here's that full game. The McNabb-TO stuff is around the 1:51:30 mark.

I remember thinking that the Steelers would be the worst possible opponent for the Eagles to have to face in the Super Bowl that year. Little did I know at the time that the Patri*ts were cheating.

Question from Sporran: Where would you set the over/under for combined Phillies + Eagles wins in what is left of 2022? (Eagles have 9 games left, with Dallas being the last one). I'm thinking 9.5.

Question from Philly Rob: Hey Jimmy - Broadcast question for you. Philly fans have had to endure a cavalcade of former opponents on national broadcasts recently with John Smoltz doing the last two Phillies series and the endless and tiresome number of former Cowboys on the airwaves, the latest being Jason Garrett (really, NBC?). Is an extended record of mediocrity what you look for in an analyst? My question: Are there any current Eagles players or coaches who you think would be good candidates to for a national broadcasting role? Kelce is the first one who immediately comes to mind, but wonder about his appeal outside of the Philly metro area?

I'm certainly with you that it's weird that a large number of ex-Cowboys are doing games. Some of them are good, like Troy Aikman, and Tony Romo was very good for a while, but less so lately. I can also see the appeal of Michael Irvin's personality on the pre-game shows. But I'll never understand why Daryl Johnston has been a commentator for over 20 years, and obviously Jason Witten was a disaster.

I had forgotten about Garrett. We get to talk to the opposing coach for 10-15 minutes before each Eagles matchup (well, we used to anyway, but now it's a little more sporadic), and if you were to ask for a ranking of the most boring coaches to interview in my time covering the team, Garrett would be No. 1, with a gigantic gap between him and whoever is No. 2.

Kelce for sure would be good. He would bring a great combination of knowledge and comedy. I looked at the current roster and found it difficult to come up with others. As for past Eagles, I remember Donovan McNabb did a few games a little while back. I was expecting that to go badly, but he was actually very good. Ron Jaworski was good, too. You could count on him to point things out during the game that you wouldn't have otherwise noticed. From a "wildcard" standpoint, I think LeSean McCoy and Asante Samuel would be fun. And then I also think that if you've listened to Chris Long's podcast, you can see how he might be a good commentator as well.

I'm a big ice cream topping guy. My favorite topping is pretzels, more specifically Herr's extra thin pretzels, which have the perfect salt-to-surface-area ratio. I break them up into small pieces and drop them in. Delicious! I also like Reese's Pieces, rainbow sprinkles, etc. As such, I don't need the actual ice cream to do a lot of work. I like the pure simplicity of Breyer's Vanilla Fudge Twirl, which is basically just vanilla and chocolate mixed together. It tastes good, but it also doesn't overpower the toppings.