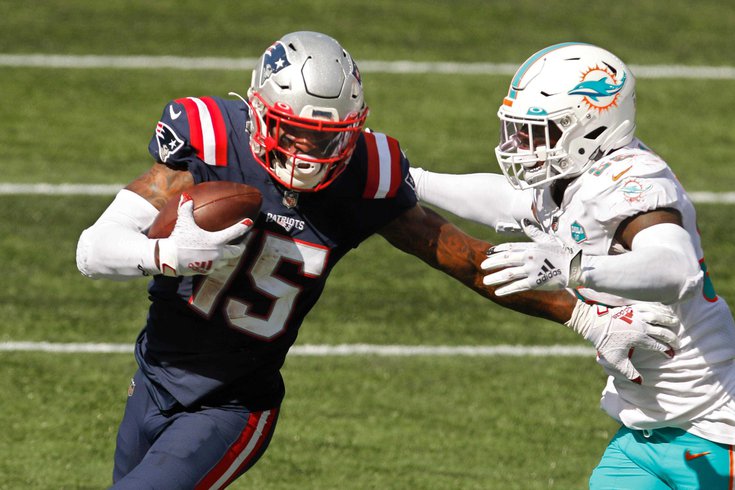 We haven't had an Eagles chat in a while, because, well, they haven't done anything in like a month. Still, I asked you for some questions for a mailbag, and as always, you came through.

Question from Joshua: With everything about this team in transition what do you think it would take for the Eagles to be comfortable with Hurts as "the guy" after the season? Is it as simple as their record... his QBR... etc?

I don't think there's a QB rating, or QBR, or TD-INT ratio, or team record, or any other specific measure that will guide the Eagles on whether they'll believe he's "the guy" for them in 2022 and beyond.

I think they need to see a continuation of his positive traits, most notably his leadership qualities, and how his teammates view him. But then also, they'll need to see a drastic improvement in his ability to throw the football, particularly in regard to accuracy.

I think we'll just kind of know it if/when we see it.

Question from Shaq: How many WRs do you think the Eagles keep going into the new season, and who will they be?

I'll have a 53-man projection before the start of camp, but after having a chance to review a bunch of those guys in our "Eagles player review" series, I think I'd have the following guys on right now:

Question from U-Dell: We hear all about DeVonta Smith’s route running and hands, but what is your take on his speed?

We don't have an official 40 time on Smith, of course, because he didn't run the 40 at the Combine or at Alabama's pro day. I'll just say that he consistently ran away from a lot of good SEC corners in his college career. He's not Tyreek Hill or DeSean Jackson, but I think his speed is good.

Question from Jeff: Will DeVonta Smith get doubled so much he will be ineffective due to the lack of talent at the other WR positions?

Receivers don't often get doubled in the NFL, but I do think that opposing defenses are going to put their best cornerbacks on Smith.

Question from Greg: How do backup QBs who stunk in the NFL land media jobs as supposed experts on the position?

Ha, I can't tell if this is in reference to Chris Simms or Dan Orlovsky, both of whom have taken shots at Jalen Hurts recently. I think that quarterbacks that don't have elite gifts but stick in the NFL for a long time have to have something going for them, in terms of their knowledge of the game. Obviously, we've seen a few guys like that pass through Philly as coaches, in Doug Pederson and Frank Reich.

I respect opinions when they're backed with game tape. Show me why we should maybe go easy on a quarterback for his faults, or opportunities that were there that a quarterback missed. That stuff has value, and I think Orlovsky did nice job with that when he started to sort of break into a role in the media. However, that valuable content has been replaced with manufactured arguments on a "take show" like NFL Live. For example:

That's all garbage, and it's hard to take seriously. I think Kirk Herbstreit is a former quarterback who is at the top of his game in his analysis, and it's because he gives thoughtful analysis of players without resorting to opinions designed to generate debate.

Question from Hathematics: Looking back at the 2018 draft, do you believe that trading with the Ravens was a good decision? Basically asking: would you prefer to have Dallas Goedert and Miles Sanders or Darius Leonard moving forward?

Would I take Darius Leonard over Dallas Goedert and Miles Sanders? Yes. But come on, man. We all know there's no way they were taking a linebacker that high if they made that pick instead of trading out, ha.

I think the decision to trade out, and the value that they got both with Goedert and Sanders in the second round was fine. Obviously, there are dozens of other moves more worthy of criticism.

Question from Cumbleton: Will the Eagles add another starter at corner? Can they actually get significant impact from this year's draft class?

In previous seasons, I typically did not project the rookies to have prominent roles, but I do think that they will have more opportunities than they normally might this year, (a) because the roster stinks, and (b) because the powers that be seem to recognize this is not going to be Super Bowl contending season.

As for the starter at corner, I'm beginning to wonder. If they can add one on a cost-effective contract, then do it. Otherwise, I'd just live with what they have, and address it next offseason.

Question from Kevin Kinkead: Is it just me, or do Eagles writers hate Ben Simmons more than anybody?

Ha, I was unaware that my colleagues were Ben Simmons haters. I can't speak for them, but personally, I'm not at all a fan of his game, and if he's still on the team next year it's going to be hard for me to watch. We can do all the mental gymnastics we want to excuse his style of play, but he's afraid to execute the main objective of the sport (make the ball go through the basket), and in my opinion, his other skills are overrated. Maybe that makes me sort of Neanderthal fan who doesn't appreciate how he narrows passing lanes on defense, and other such apologist nonsense? I don't know.

But if indeed we (Eagles media) as a group are harder on him than the average commentator, I'll throw out a hypothesis. Maybe it's because football culture is so geared toward constant improvement, competition, love of the sport, etc., and we view Simmons as an immensely gifted physical athlete who should be getting better, but never really does? And then also, as "fans" of basketball as opposed to "BIG J journalists" when we're covering football, maybe our criticisms on Twitter and the like sound more complainy, when we might attempt to have a more measured tone if criticizing a player in the sport we cover?

But again, I was unaware that this was a thing, though it's not surprising to me if there's truth to it. On a side note, Kevin... a 3 seed? FOH.

This was harder than I thought it'd be. The Sixers are clearly at the top, and then the next three could really be in any order.

Question from Herb: Better chance of being an Eagle this season; Zach Ertz or Nate Gerry?

Ha. Gerry. And I actually mean that. That's not a joke answer.

Yes, I do think he'll ultimately land somewhere, maybe as one of those "midway through camp" guys. It'd be hilarious if it were in Indianapolis.

Question from Danny: Should the Eagles have trade interest in N’Keal Harry from the Patriots?

I've seen the Eagles listed as a potential landing spot, though my guess is that little more thought went into it than, "The Eagles' wide receivers stink, and this guy plays wide receiver so they should have interest in him."

I'm not interested in players who play badly and then demand trades.

Question from Collin: Are you looking forward to covering food spreads this year?

That reminds me. My continuing 2020 food spread column was just sort of left in limbo after I stopped traveling to road games. I have to put a bow on that somehow. But yes, assuming actual meals return in favor of boxed lunches, I am looking forward to a return to press box food spread normalcy.

Question from TheBlackIrishman: I'm always shocked at your vocal range in your podcast commercial for Kristin Roach of Roach Realtors (very catchy & your daughter was great too). What song are singing if you're an NFL rookie?

Ha, you're kind, good sir, but I'm the worst singer ever.

As for your question, do you mean, what song am I singing if I were forced to sing something in front of the whole team like they show on Hard Knocks? I think I would construct a TV theme show medley and belt it out like I'm Whitney Houston. Also, I think the other approach that always works is to do impressions of coaches and other players on the team, so I'd be looking for imitable personalities throughout camp.