Eagles minicamp practice notes: Up and down day for Carson Wentz 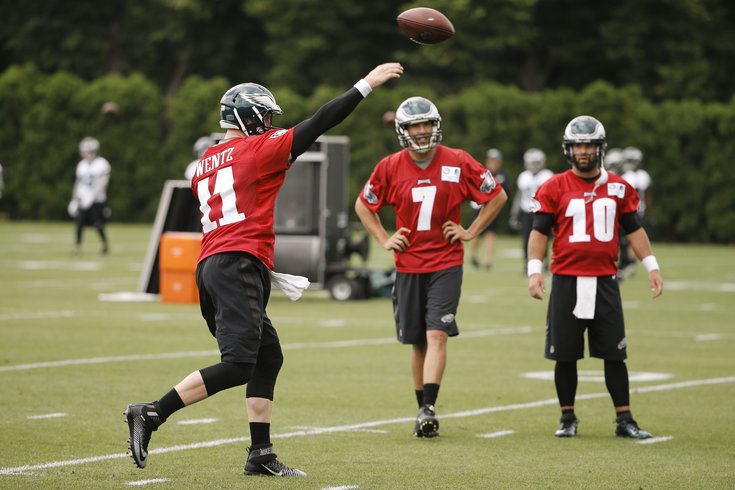 Tuesday kicked off the Philadelphia Eagles' three-day mandatory minicamp, which will be the last time the Eagles practice as a team until training camp begins at the end of July. Here's what we saw on the field:

• Sammy Sleeves had a nice day. He was generally accurate, although the degree of difficulty on his throws wasn't very high.

• On a pair of throws in which Bradford hit the receiver but didn't have good ball placement, Zach Ertz made a really nice grab on a ball thrown behind him while in a dead sprint. Jordan Matthews also had a leaping grab over the middle on a ball that was thrown too high. The Eagles led the NFL in drops last season, and while the lion's share of the blame should be on the receivers, maybe some of the passes they dropped were partly attributable to poor ball placement by Bradford.

• Speaking of drops, Josh Huff had his daily drop. This one was along the sideline. He had to jump to get it, but it hit him in the hands. Nelson Agholor had a pair of drops today as well.

• Malcolm Jenkins timed out a blitz nicely and sacked Bradford. Bill Davis didn't use Jenkins much that way, which kind of makes sense to some degree, since Jenkins is so valuable in coverage. However, Jenkins is smart and athletic -- two traits of a good safety blitzer. He should probably get more opportunities blitzing the quarterback.

• Fletcher Cox didn't participate in 11-on-11's, but he did have a nice one-handed catch on the sideline on a ball thrown out of bounds. Darren Sproles, the other OTA no-show, participated in practice far more than Cox did.

• Allen Barbre got into a little post-whistle scrap with Connor Barwin, although it wasn't much. That's the second time Barbre has had to be separated from someone this offseason, that we know of. The first incident was with DT Mike Martin.

• Josh Andrews had a very rough day as the second-team center. By my count, he had at least three bad shotgun snaps. Credit Chase Daniel on one of the snaps for making a nice play. The ball was snapped over Daniel's head, but he was able to grab it on the run, sprint outside the tackle box, and throw it away. Heady play.

• Daniel was able to draw the defense offsides with a hard count, and he had a free play. Coaches on the sidelines were yelling "OVER THE TOP!" advising Daniel to take a deep shot down the field as long as they had an offsides penalty on the defense, so he did. I haven't seen that in four years, because Chip Kelly's offenses never used hard counts.

• Tight end Chris Pantale has gotten a lot of reps at fullback. Just something to file away.

I have a lot of Carson Wentz notes today, so buckle in.

• One thing that has been clear in media-attended practices so far is that Wentz takes far more shots down the field than the other two quarterbacks. It's not even close. He has a big arm, and he likes to let it rip. There's good and bad in that. On the one hand, that's going to lead to a higher percentage of incomplete passes and picks. On the other hand, you're going to get more big plays, and pass interference penalties. #Analysis.

Anyway, the point is, he doesn't seem to GAF, which is a quality I admire in a quarterback, within reason. It's certainly better than watching the quarterback throw short of sticks on third down all game.

• On one deep throw, Wentz threw his worst pass of the offseason, or at least the worst one that I've seen. It was a play action waggle to the right side, and Wentz threw deep all the way back across the field to the left side. It was a wounded duck that hung in the air for a while, and was easily picked off by Chris Maragos.

• On another deep ball, Wentz dropped one in the bucket to Hunter Sharp. Well-placed deep throw.

• Wentz seems to have the improvisation gene. During OTAs, we noted a play in which Wentz nearly tripped and fell, but made something out of a bad situation:

Wentz's highlight of the day was a play in which the pass rush was collapsing on him. While climbing the pocket, he tripped on a lineman's foot, and started to fall. While falling to the ground, he was able to turn his body, and still complete a throw with enough power to get to the sideline. Carson Wentz might throw harder while falling to the ground than Matt Barkley with a full head of steam.

Today, he fielded a low snap off the ground, quickly popped up, and hit Paul Turner over the middle.

• Overall, it was an up and down day for Wentz. In case you missed it, we noted earlier that Wentz will likely get as many reps as Bradford all the way up until the third preseason game.

We'll be back with more notes tomorrow.