Hurts is one of the three finalists alongside Kansas City's Patrick Mahomes and Minnesota's Justin Jefferson. 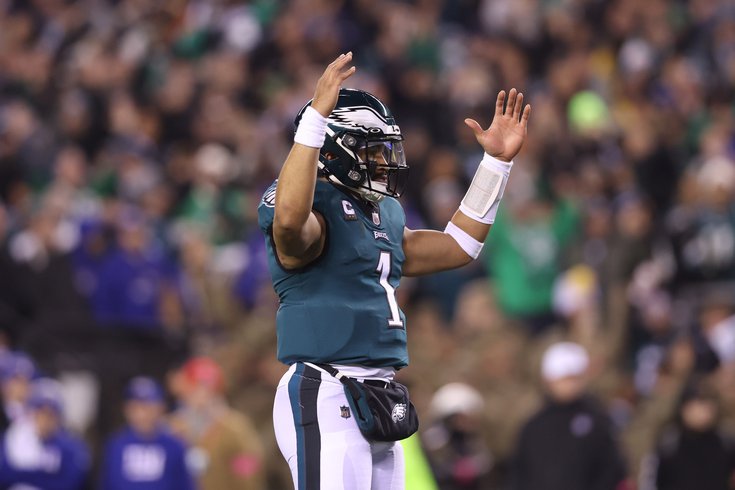 Eagles QB Jalen Hurts signals 'touchdown' in celebration after RB Boston Scott punches it in during the second quarter of Saturday night's divisional round playoff game against the Giants at Lincoln Financial Field.

Unfortunately for Eagles fans, I have my doubts that Hurts can win this. Mahomes, after receiving 49 out of 50 of the votes for First-Team All-Pro QB, would likely pull ahead of Hurts for both this and the MVP award, of which they're both finalists for also. At times, the Offensive Player of the Year Award has also meant "the best non-quarterback offensive player," so that line of thinking would help Jefferson's case after a huge season where he had 1,809 receiving yards.

Still, head coach Nick Sirianni made the argument for his QB down at the NovaCare Complex on Wednesday.

"But again, I think Jalen's going to say the same thing, 'Yeah, awards are nice, but we have much bigger team goals in mind.' And I hope Jalen wins it because you want that for your players. He's had a great year. I know there are other people deserving as well. He's just gonna continue to go about his business and get ready for this next game."

No Eagles player has ever won the AP Offensive Player of the Year Award previously.

I'm sure Hurts would call all of these award-season shenanigans "rat poison" anyway.