Nick Sirianni snubbed as AP Coach of the Year finalist 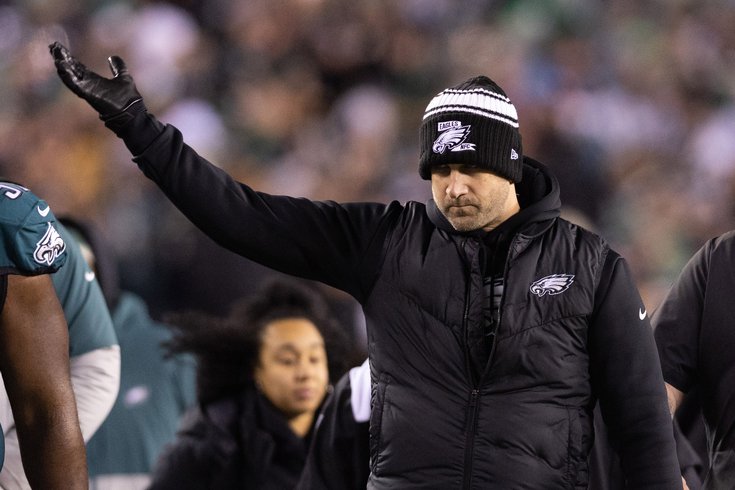 In Year 2, Nick Sirianni led the Eagles to an NFL-best 14-3 record, an NFC East title, and put them in a position to now be just one win away from the Super Bowl.

The Associated Press released its finalists for the league's end-of-year awards Wednesday morning and Sirianni was not listed as one of the candidates for Coach of the Year.

To each of the three coach's credit, they did turn in spectacular work in 2022.

Daboll took a Giants team that was in pieces a year ago and got them off to a surprisingly hot start, and even though they faltered and evened out down the stretch, they managed to grab a playoff spot within a highly competitive division.

Shanahan's 49ers still managed to grab the NFC's No. 2 seed after injuries left them to resort to third-string quarterback Brock Purdy as their starter, ringing off seven straight wins in the back half of the season and into the playoffs to lock in a matchup with the Eagles in the NFC title game this Sunday.

And Pederson? If the Giants were in pieces, the Jaguars were in ashes after Urban Meyer, but Pederson came in and got quarterback Trevor Lawrence on track, banded the roster together, and pulled off a heist of the AFC South from a collapsing Titans team who probably should've had it in the bag. And that was all in Year 1.

But Sirianni had a pretty good case, right?

Maybe it's the strength of the roster that cost him some points here, but a full year to implement a system and work with a quarterback in Jalen Hurts, who took a huge leap as a starter, resulting in a league-best record within a highly competitive division (three of the four NFC East teams made the playoffs)? That feels deserving of some recognition.

Though a Lombardi Trophy would more than make up for it, and Sirianni will be one of the first to tell you that.

"That's something I can't control and those awards are nice and everything like that," Sirianni said of the awards finalists Wednesday down at the NovaCare Complex. "I'm really happy for [Jalen Hurts] and [Shane Steichen] that they're on that but we have obviously much bigger things ahead and on our sights than individual awards."

Some other notes from the AP's year-end award finalists:

• Jalen Hurts is a finalist for Offensive Player of the Year. More on that from Shamus Clancy HERE.

• Edge rusher Haason Reddick is not a finalist for Defensive Player of the Year. That's egregious and here's also Shamus Clancy from earlier in the season on why.

• Veteran defensive end Brandon Graham was also snubbed from Comeback Player of the Year, because coming back from a torn Achilles in his mid-30s to register a career year in sacks apparently wasn't good enough to make the cut.

No BG?! 🤦‍♂️ #cmonman@brandongraham55 is the real comeback POY https://t.co/Bp6YAdGJzG