Mailbag: Could Howie Roseman end up in the Hall of Fame? 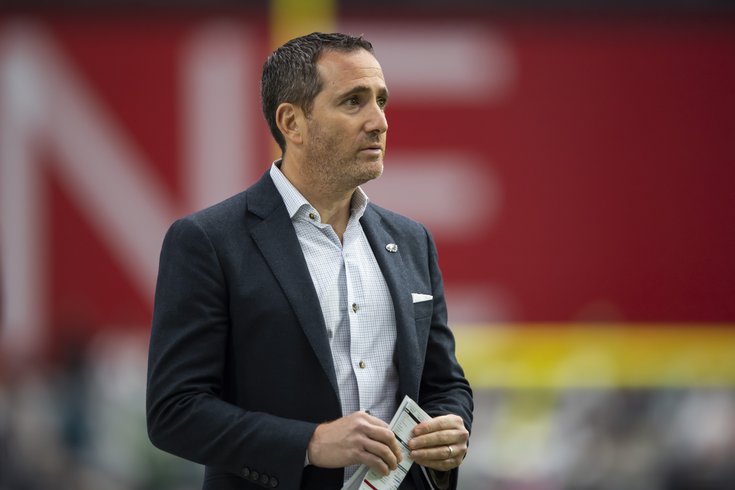 Hey, I know Jimmy Kempski typically holds it down on PhillyVoice with mailbags, but in the spirit of this potential Eagles Super Bowl run, there's always room to talk more about the Birds.

The most intriguing question I received felt ultra-relevant given that the Baseball Hall of Fame just announced its Class of 2023, including former Phillie Scott Rolen.

Let's get after it with some help from our readers...

@PhillyAx: Is Howie Roseman going to the Hall Of Fame? (Pretty sure I wanted the guy bounced a few years ago, but rebuilding a Super Bowl contender with a different coach/QB in record time will change your mind quickly)

I can't believe we're actually discussing this. If you told me I would be doing so two years ago in the aftermath of the franchise's disastrous 4-11-1 season, I'd have laughed in your face. I called for Howie Roseman to be bounced, too. A lot of the issues with the team were his own doing, but in the next two offseason, he's set this organization on a path to contend for a championship this year and, theoretically, the next couple of years. I named the guy as the Philadelphia sports figure of the year for 2022. Time flies!

So... can Roseman actually wind up in Canton one day?

Again, this feels so odd to be discussing given the hot and cold nature of his tenure in Philly, but if the Birds were to win the Super Bowl this year, his accolades stack up high against the football executives currently in the Hall.

From my count, there are currently eight "contributor" members of the Pro Football Hall of Fame who were strictly front office personnel. Not people who were owners and had team control like Jerry Jones, nor part-time coaches. Here's the list, including how many times they won the Sporting News NFL Executive of the Year Award and the Super Bowl. For executives who held a general manager role, I only counted the titles they won as GM even if they additionally won championships in lesser front office positions.

The Hall of Famers...

Roseman was named Executive of the Year for 2017 for constructing that season's Super Bowl champion. I'd imagine if the Eagles hoist the Lombardi Trophy this year that he'd win that award running away again given the offseason acquisitions of A.J. Brown, Haason Reddick, C.J. Gardner-Johnson, James Bradberry and more. He'll have constructed two Super Bowl winners that had two different coaching staffs and quarterbacks. Only four starters from Super Bowl LII are still on this team. That'd be essentially two entirely different rosters to have won it all five years apart.

@Erosebud: What jersey combo will maximize our chances on Sunday?

My personal favorite Eagles uniform combination is white jerseys with green pants. It just hits for me. For this particular game, however, they have to roll with the midnight green jerseys and white pants. That's what they always wear at home in the playoffs. They've made the Super Bowl twice at the Linc wearing that and may do so a third time on Sunday. No-brainer choice.

@MickJamison1: Is A.J. Brown healthy? We'll need him, and [DeVonta Smith], to work the outside. How serious is his "minor" injury?

Speaking to the media on Monday morning, head coach Nick Sirianni said the following when asked about A.J. Brown:

He was going through a little something with his body that was hurting him. We feel like he'll be ready to go this week, but he was hurting in that game. That's why he wasn't in the game.

I would not be concerned right now about Brown's status. He's been frequently banged up in his career, but I'd imagine he's out there for the biggest game of his life (so far!).

@LukePemberton44: How do you think Hasson Reddick performs beings matched up with Trent Williams?

The 49ers' Trent Williams is the best left tackle in the sport. Emphasis on "left" there because the best offensive tackle in the NFL is Lane Johnson.

Anyway, Haason Reddick primarily lines up on the left side of the Eagles' defense, meaning he'd be rushing again San Francisco right tackle and Penn Charter grad Mike McGlinchey. McGlinchey is a good pro, but that's a matchup that's in the Birds' favor. In his postseason debut against the Giants, Reddick had 1.5 sacks and three QB hits. I'd expect another strong showing from him.

@CSaboveDaRest: Which team will Frank Gore be rooting for?

Frank Gore may have run for over 11,000 yards across 10 seasons with the 49ers, but the memories of the roughly 36 hours Gore was supposed to be signing with the Eagles in 2015 will last a lifetime.

@LargePetroleum: which 3 matchups do you think most favor the Eagles in this game and which matchup are you most worried about?

The three matchups the Eagles should be most worried about:

• Nick Bosa vs. Jordan Mailata: Perhaps it's my own expectations working against me, but I thought Mailata would be a clear Pro Bowler this season and perhaps an All-Pro candidate. He hasn't quite reached that level yet. He'll be lining up across from likely Defensive Player of the Year Award winner Nick Bosa. This isn't as much of a shot at Mailata as it is admitting how fearsome Bosa is as a pass-rusher. Mailata needs to turn his game up a level on Sunday and I have faith he can hold Bosa relatively in check.

• 49ers with the ball in space vs. Eagles tacklers: The Eagles' pass rush and secondary have both been elite in 2022, but they're susceptible over the middle where short throws can turn into chunk gains for opponents, especially with less-than-ideal tackling from Eagles defenders. Half-measure arm-tackling against the likes of Christian McCaffrey, Deebo Samuel and George Kittle in the open field isn't going to cut it.

• Fred Warner vs. anything: Warner does as much as I've ever seen from an NFL linebacker. Now that's a guy I could see in Canton eventually. This is more so a general "Hurts needs to know where No. 54 is at all times" comment.

The three matchups that most favor the Eagles:

• Brock Purdy vs. reality: I discussed Brock Purdy on Tuesday. No rookie quarterback has won a conference championship game. The four previous ones to start, Shaun King, Ben Roethlisberger, Joe Flacco and Mark Sanchez, all lost. That's not predictive info as much as it illustrates how difficult it is to win in this league in the postseason with limited experience. Sunday will be just Purdy's eighth career start. Hurts' eighth start came in Week 4 of the 2021 season. That's a long time ago. Purdy appears due for some turnover regression, too.

His first road playoff test comes at Lincoln Financial Field in front of a rabid Eagles crowd. A big first-quarter sack from Reddick or Brandon Graham could have him spinning for the rest of the game. He's had success, but there remains an unknown element with him and things tend to even out at a certain point.

• Nick Sirianni vs. Kyle Shanahan: There aren't many people who would say this! Kyle Shanahan is obviously an innovative play-caller who's turned mediocre quarterbacks into multiple conference championship appearances over the last few years. While his Xs and Os are top level, he leaves much to be desired when it comes to clock management and those big picture in-game decisions. Nick Sirianni's aggressiveness has always been one of his best qualities with the Eagles and with the talent level this roster has, they've made good on his trust in the team. A cowardly punt in a given situation from Shanahan combined with some of Sirianni's trademark guts could flip a game in a hurry for the Birds.

• Jalen Hurts vs. the moment: Let's sum things up. Who do you trust more in a big situation: Purdy or Hurts? If the Eagles need a game-winning drive late, every soul in that stadium is going to believe Hurts can get it done. As Philadelphia saw with Nick Foles' 2017 and 2018 playoff heroics, demeanor, energy and leadership matter come the postseason. Talk of intangibles can get overblown, but it's real with this guy.

Jimmy Kempski also ran through five matchups to watch when the Eagles have the ball.

Did you just hold the door open for someone at Wawa?