Who won the week in Philly sports: Nick Sirianni has Eagles' first-teamers cruising and defends his quarterback 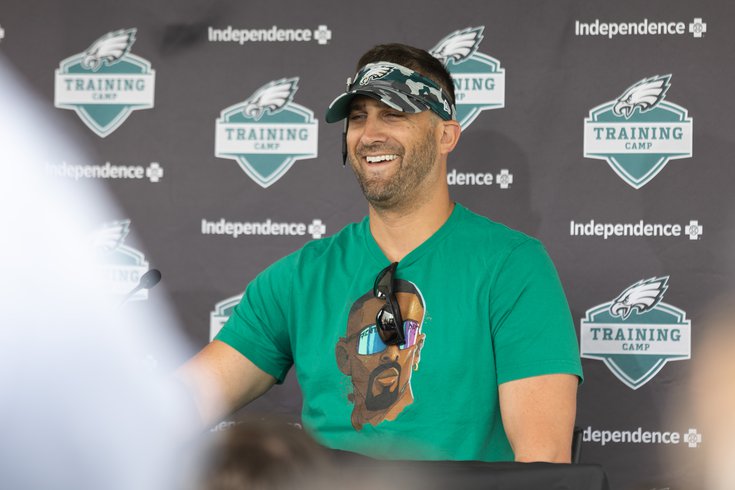 The Eagles may have lost their preseason opener to the Jets, but throw that L out the window. August wins and losses are worthless in the grand scheme of things, but identifying positive takeaways can be a plus. Again, a good or bad preseason performance isn't changing the trajectory of a team's regular season campaign, but any signs of encouragement for the Birds' passing offense and overall defense are certainly welcomed for Eagles fans.

I'm throwing props to Nick Sirianni this week given how good the Eagles' first-team units looked on Friday night in South Philly against the Jets. Sirianni isn't the team's main play-caller this season, a task that falls upon offensive coordinator Shane Steichen's shoulders, but he's obviously heavily involved in the game-planning while still having his hand in the other parts of the team. Sirianni gets the prestigious honor of "winning the week" in Philly sports.

The Eagles' first-team offense played just a single series on Friday night, but it was a successful (and eventful, see the next point) one for the Birds. Quarterback Jalen Hurts, coming off an uneven 2021 season as a passer, went 6/6 with 80 passing yards, had a 22-yard touchdown strike to Dallas Goedert, and a perfect passer rating of 158.3. Doing this in August against a lackluster Jets defense (Robert Saleh is supposed to be a "defensive" head coach, so that's something) doesn't move the needle for who Hurts is as a quarterback, but looking good is certainly preferable to looking bad for the Eagles.

On the defensive end of things, the Jets' first offensive possession lasted just five plays, as Kyzir White picked off QB Zach Wilson. Great instincts from White on that one, baiting Wilson into the errant throw. White has been a standout at training camp this summer (I wrote a feature on him after Friday's game) and the linebacker group is finally a strength on this roster.

If the first-teamers are looking good against other first-teamers, that's a whole lot more impressive than the Jets' third- and fourth-stringers coming on strong for a comeback win against the Eagles' backups.

The energy around this team, watching them practice day in and day out at the NovaCare Complex, is right where it needs to be. The expectations are high in Philly, but the team truly doesn't look like all that hype is going to their heads. Credit to Sirianni for setting the tone and keeping the vibes going strong. He weathered the storm after his blooming flower debacle last fall and has cultivated an admirable culture in the building.

When talking about culture in an NFL locker room, the connection between the head coach and the players is integral to keeping that positive energy. Sirianni has always given off the vibe of a player-friendly coach, right down to his pandering t-shirt choices (more on that in a sec). I loved the emotion Sirianni displayed in the aftermath of a cheap shot, late hit on Jalen Hurts by Jets linebacker Quincy Williams on Friday:

Quincy Williams with a late hit on Jalen Hurts 😳
pic.twitter.com/Zwx1crjDsm

I wrote about the play and Sirianni's reaction on Saturday:

Hurts was very clearly out of bounds and Williams did not spent one iota of effort to pull up on the late, cheap hit. For those skilled in the art of lip reading, it appears that Eagles head coach Nick Sirianni screamed, "That's f*****g b******t!" across the field to Jets head coach Robert Saleh. He followed that up by throwing his headset and belting out, "Saleh, what the f**k?"

Hurt said "That's Philly" about Sirianni and his fellow Eagles players' reactions after Friday's game. I'm not sure Sirianni could love anything more than being called "Philly." He might be printing up "That's Philly" shirts to wear before games while the Eagles warm up on the field this season as I write this.

Sirianni has become known for wearing a bunch of different graphic tees at practice highlighting different players. His Hurts shirt is the most famous of them, but I've also seen him wear shirts for Brandon Graham and Quez Watkins this summer. There's a new addition to Sirianni's shirt rotation from Sunday morning's practice. It's actually for a player he never coached: Jeremiah Trotter.

Trotter played for the Eagles from 1998 to 2001 and then again from 2004 to 2006. His nickname was the "Axe Man" given that he worked with his father and siblings to chop wood as a child in Texas. The axe chopping celebration was natural from there. Trotter was a four-time Pro Bowler and a two-time All-Pro selection. He was inducted into the Eagles Hall of Fame in 2016.

Sirianni picked a gritty guy to highlight with the shirt. On brand.