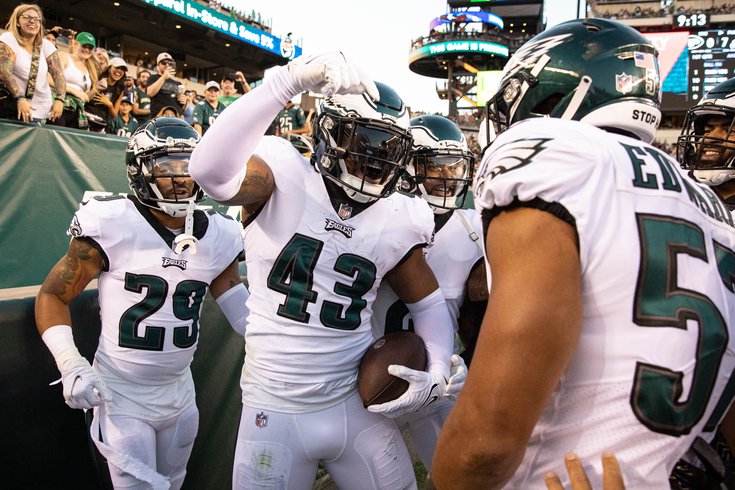 Kyzir White after picking off Zach Wilson in his Eagles preseason debut.

For a position that has been the bane of Eagles fans' existence for sometime, the Birds' linebacker corps has looked legit this summer. T.J. Edwards might have had the best training camp of any Eagle on either side of the ball. Nakobe Dean won the Butkus Award as the best linebacker in college football in 2021 and had five tackles against the Jets on Friday night. Then there's Kyzir White, who's interception in the team's matchup with New York had a lively Lincoln Financial Field crowd in a frenzy.

On the Jets' first play of scrimmage and White's first play ever suited up for the Birds, White tackled Jets back Michael Carter, holding him to just a one-yard gain. Four plays later, the new free agent linebacker baited Zach Wilson into throwing an interception, returning it 27 yards and putting the offense in a position to punch in another touchdown:

A slight hesitation from White in zone coverage was all he needed to time Wilson's throw and pounce on the QB's mistake.

"I was playing visual on the quarterback and I seen it in his demeanor where he was going to go with the ball and I just tried to sprint and make a play on it," White said about the play when speaking with reporters Friday night after the Birds' preseason loss.

"It meant everything," White continued on, talking about doing this in his first game action in Philadelphia. "First game, getting my feet wet. Family and friends in attendance, so I always want to go out there and put a show on.

"It was definitely a great start for me, but I got to keep building and keep getting better each and every day."

On Saturday morning, White posted a highlight of his pick on his Instagram page with the heart-warming caption of "R.I.P Grandma Look At Cha Grandson🖤🙏🏽"

I don't know White's family situation, but that's a touching tribute for a debut I'm sure White couldn't be more happy about.