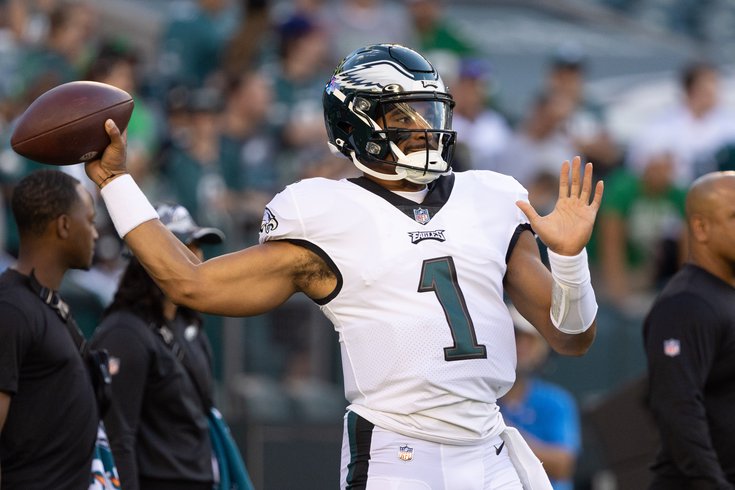 Eagles quarterback Jalen Hurts in the Eagles' preseason opener against the Jets.

Live from the press box at Lincoln Financial Field.. it's Friday night! After the first half of action in their preseason opener, the Eagles are up 14-3 on the New York Jets. Here are some running observations from the first half of Eagles football that the city's seen in seven months...

• Pre-kickoff note: the most random fan jersey in the section in front of me is an official, customized midnight green Mike Golic jersey. Golic played in Philly while the Birds still used their Kelly green look, but rock on regardless. There's also a young fan in a Brian Dawkins Clemson jersey. Props on finding that one out there. I'd say the Linc is about 55 percent full immediately before the coin toss.

• The Eagles had three captains out for the toss: Jalen Hurts, Brandon Graham, and Jake Elliott.

• First play from scrimmage: Jalen Hurts feels some pressure as left guard Sua Opeta gets steamrolled. QB1 rolls right and hits Quez Watkins, who wisely gets his feet in before the sideline for a 28-yard gain.

• That late hit on Hurts on a third-and-five scramble from Jets linebacker Quincy Williams is one of the most egregious things I've ever seen in a preseason game. Nick Sirianni was (rightfully) spitting fire like a dragon to the referees.

• A Jordan Mailata hold in the red zone wipes out what would've been a Hurts touchdown scramble. Very clear call.

• Dallas Goedert looked like a pole-vaulter flipping into the end zone on a 22-yard touchdown catch from Hurts.

• Jalen Hurts' first drive of the preseason: 6/6, 80 yards, one touchdown, perfect QB rating of 158.3. He'll pick up huge points with the fan base for the moxie he illustrated following that cheap shot hit. The throws were sharp!

• No targets for A.J. Brown on the first drive after writing all summer about how Hurts force-fed him the ball in training camp. In my Friday morning story where I made up a few over/unders for the game, I set Brown catches from Hurts at 2.5 and picked the under. The under hits!

• With the Jets having the ball on the ensuing drive, the Birds' first-team defense opens with a 4-3 look. I'll be monitoring the fronts when the starters are in all preseason.

• Kyzir White picked off a poor, poor throw from Jets QB Zach Wilson and picked up 27 yards on the return. White has had a strong camp. He's a clear top-two linebacker on this team right now with T.J. Edwards. That's before even getting to the promise that rookie Nakobe Dean has.

• With a short field, Gardner Minshew unsurprisingly takes over for Hurts under center.

• After getting stuffed on two goal-to-go runs, fourth-string running back Jason Huntley punched it in for a two-yard touchdown run. Huntley has flashed this summer and the team is light on running backs. They have three locks for the roster in Mile Sanders, Boston Scott, and Kenny Gainwell. Huntley provides some juice as a kick returner too. Could play his way on the roster! Birds up 14-0.

• There's that promise from Dean with the second team out there. The Butkus Award winner has such great instincts for finding the ball. He made a couple of nice tackles on the Jets' second offensive drive.

UGA on full display. Davis gets in the backfield and Dean cleans it up pic.twitter.com/ZjygKw2csU

• On third and goal from the Eagles' own eight, Tarron Jackson had a great rush on quarterback Mike White (filling in for the injured Wilson), hitting the QB, causing an errant throw, and forcing the Jets to settle for a field goal. There's a lot of depth in this defensive front. Jackson, who was a sixth-round pick last year out of Coastal Carolina, played 23 percent of the team's defensive snaps in 2021.

• Britain Covey time! He takes his first kick return from the two for a gain of 25 yards.

• First three throws of the next drive both go to Jalen Reagor. The first one was a fairly rough throw from Minshew that went to Reagor's wrong shoulder. Reagor had a nice chunk pick up over the middle for 17 yards before picking up another short three-yard gain.

• Fourth and one from the Jets' 47... Minshew picks up eight yards on the ground on a read option that gave me Jake Plummer vibes.

• Arryn Siposs with a 27-yard punt that only lands at the Jets' 16. I know Jimmy Kempski is fuming about the punter situation.

• Defensive coordinator Jonathan Gannon has been deploying some 5-2 overhang looks with three down linemen and two stand-up rushers right at the line of scrimmage on the edge.

• Another QB hit from Jackson. He's got a motor.

• Mike White almost had a "butt fumble" moment. The Jets, everyone!

• The Eagles deflected a pass at the line of scrimmage. It was, of course, Jackson who tipped it. He's owned this first half. It forces a Jets punt.

• Reagor gets the first punt return rep of the game. I have a feeling Covey gets them in the second half.

• Huntley keeps getting work in the two-minute drill as the half inches to its conclusion. A third down screen had offensive lineman Jack Driscoll looking spry in space against Jets defenders.