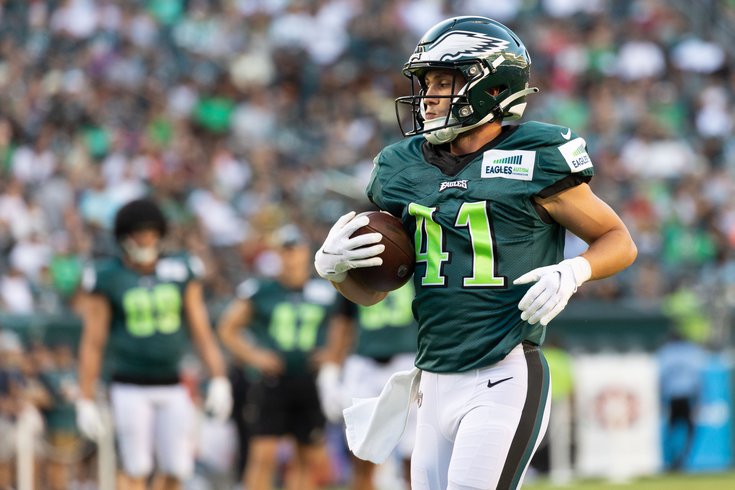 Britain Covey #41 of the Philadelphia Eagles catches the football during an open practice at Lincoln Financial Field in Philadelphia, Pa. on Aug. 7, 2022.

We are now 10 practices into Philadelphia Eagles training camp, so I figured I'd take some time to poll the Eagles' media contingent on which players have looked good so far throughout camp, and which ones have not looked so good.

For this exercise, I asked 23 Eagles media people, all of whom have attended every practice (or close enough to it in almost all cases) to identify one player whose stock is up, and one whose stock is down.

On the stock up front, five players received at least two votes.

For full disclosure, my vote was for Marlon Tuipulotu, who in my opinion is the most improved player this year. I agree that all four of the other players on the list above are deserving of some love.

Six other players got one vote each. In alphabetical order:

I agree that all six of those players have also exceeded expectations so far.

The biggest "false positives" were Sidney Jones in 2019, and John Hightower in 2020. However, the first 10 or so practices of camp were predictive of good seasons for Miles Sanders in 2019, as well as Nelson Agholor, who had his lone impact season in 2017. Also, guys like Marcus Johnson and C.J. Smith were players who entered camp as longshots, but deserved to make the team, and did.

On the "stock down" side, four players got at least two votes.

My pick on the "stock down" vote was Gardner Minshew. To note, I have seen far worse camps from quarterbacks in my day, but Minshew hasn't played like a top-end No. 2, and really, I just didn't think there were many other good choices. Jaquiski Tartt's five votes were fair, in my opinion, as he has been virtually invisible throughout camp.

For the record, I don't agree with the multiple votes for Nakobe Dean (expectations were probably set too high for him in the first place) or Smith, who has missed time with a groin injury while A.J. Brown has developed rapport with Jalen Hurts. Certainly, both Dean and Smith could have had better camps so far, but I think there were better choices.

Eight players received one vote each. In alphabetical order:

In total, 12 different players received a "stock down" nod, which is a very high number compared to other seasons, and I think the reason why is because there haven't been any players who have been obviously terrible in camp this year, like Andre Dillard was last year, for example.

Patrick Robinson had one of the worst starts to camp that I've ever seen, but he got better as the summer progressed and ended up becoming one of the best slot corners in the NFL that season, making a HUGE play in the NFC Championship Game along the way.

So, for the most part, like most Philadelphians, we can identify a struggling player when we see one. But again, it was harder picking a "stock down" player this year. Minshew could be in a position in which he has to start a couple games for the Eagles this season, and it wouldn't be surprising at all if he played well.