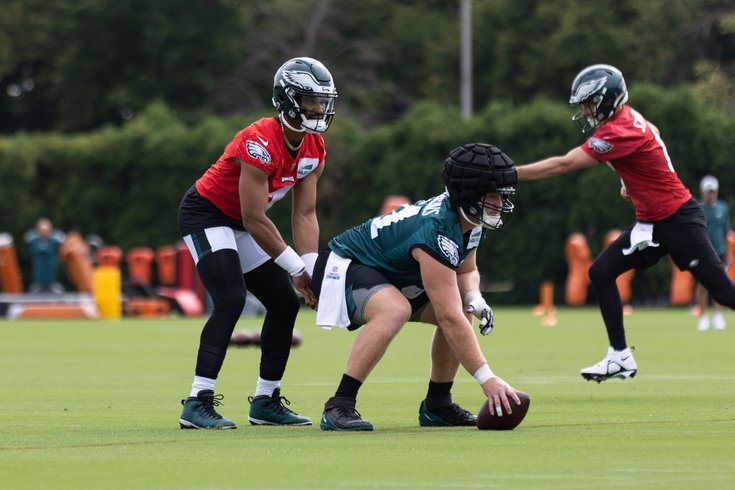 It's hard for any rookie to step into a new locale and get first-team reps during their first ever NFL training camp. I'd imagine it's even harder to do that when you're replacing a player and person of Jason Kelce's caliber. That's the role center Cam Jurgens, the Eagles' second-round pick back in April, now finds himself in.

Kelce will miss time this month after undergoing elbow surgery on Tuesday. There is an expectation that Kelce will be ready for the Eagles' Week 1 opener in Detroit, continuing his iron man streak of 122-consecutive starts. Jurgens will still need to be ready in case that optimistic diagnosis doesn't come through, especially when anchoring an offensive line that was the heart of the Eagles in 2021.

"Gotta fill in for whoever's down and Kelce's down right now, so I just got to do my best to fill in there," Jurgens said after Wednesday's practice about getting all of the first-team reps at center now. "It's good for me because I get those extra opportunities, extra reps."

Jurgens has gotten those first-team center opportunities earlier in camp with Kelce missing time here and there for COVID and rest reasons, but it's a crash course going forward this month for the Nebraska product. Jurgens gives props to Kelce for his nonstop advice both and on and off the field as he turns into a pro player. He'll need it as he heads into his first ever NFL preseason game on Friday night.

"I get more ready every single day. I'm excited," Jurgens continued. "I'm just ready to go play some more football and hit someone else besides your own team."

Some of this is just generic player speak, especially coming from a rookie now in the wild world of Philadelphia sports, but there's a demeanor from Jurgens that shines through. Jason Kelce. Lane Johnson. Jordan Mailata. Landon Dickerson. All of those offensive linemen have big personalities off the field that make themselves endearing to Birds fans, but they have the mean streak necessary on the field to hold down the best offensive line in the entire NFL.

It'd be the understatement of the century to say that South Philly is a bit of different place than Jurgens' hometown of Beatrice, Nebraska, but those country boy vibes Jurgens may have nevertheless translate to an angry mauler who plays through the whistle.

When asked if he thought he's improved over the first 10 practices of camp, Jurgens said, "Oh yeah. Definitely. Just listening to [Eagles offensive line coach Jeff Stoutland] and o-linemen around me... More or less, the thing I'm trying to focus on, I have supreme faith and confidence in the guys to the left and right of me, so I'm just trying to earn that respect and get that confidence from them in me."

All that talk of Stoutland and the other offensive linemen is key. Jurgens doesn't need to be Kelce to be successful if the Eagles legend misses time this year or, more generally, whenever Kelce hangs up his cleats and Jurgens becomes the true starting center in Philly. No one can be Kelce. If Jurgens is thrust into real action in 2022, he just needs to be a glue guy given how talented all the other linemen are around him. Having two All-Pro-caliber offensive tackles makes things a whole lot easier.

Stoutland, of course, draws constant praise for his work with this team's offensive line, a connective tissues dating back to when former head coach Chip Kelly first hired Stoutland to be the o-line coach way back in 2013. The constant for this team through the last three coaching regimes is the offensive line play, a massive win for Stoutland. The Eagles are hitting on Day 2 and Day 3 draft picks and churning out quality NFL linemen. Credit to the front office for their evaluations and obviously the players themselves for working hard to develop, but Stoutland keeps this machine chugging along.

I have little doubt that Stoutland will have have Jurgens ready to play whenever his first start in midnight green may be, whether that's Week 1 this season or a year down the line.