Jalen Hurts Watch 2022: Eagles QB has best practice of the summer ahead of preseason opener 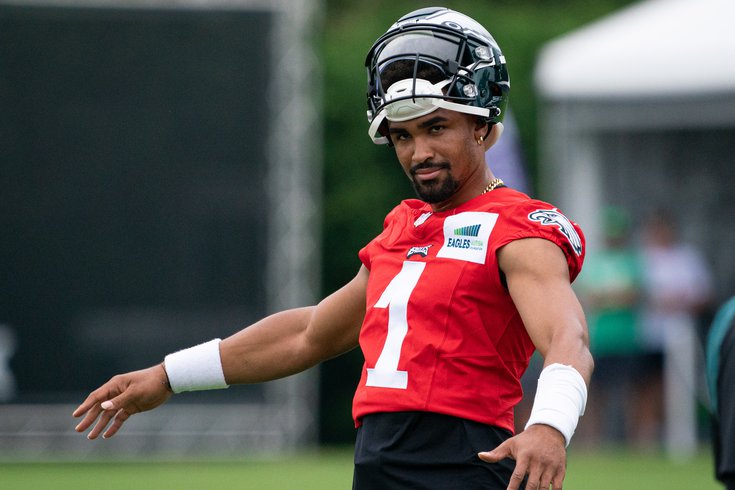 Last practice before the preseason opener, can't hold anything back! Eagles quarterback Jalen Hurts did just that on Wednesday morning down at the NovaCare Complex in South Philly, turning in his best practice of the entire summer.

I've been covering all of Hurts' throws whenever I've been at camp over the last few weeks. There were a couple good days, a couple okay days and a couple bad ones. That's likely what most Eagles fans would've expected. Finishing strong, however, should be an encouraging sign before the Birds' first preseason game Friday night at Lincoln Financial Field.

• Play 1: Maybe the best play of the day! It's a play-action rollout right. There is some pressure, but Hurts avoids defenders, steps up and hits A.J. Brown 20-ish yards down the field on a slant route in stride. That's exactly what he needs to do this season.

There was a bit of chatter among the media members about whether it was a sack, I'm saying no. I talked with WIP quarterback-charting reporter Eliot Shorr-Parks about whether the play would be considered a "touchdown" given that we've had some discrepancies in our Hurts "touchdown" stats this summer. I'm going no because there was still 25-30 yards of field in front of him even though no defenders were in sight. ESP was "50/50" on it. No qualms with him going yes there, but I'm not going to count it.

• Play 3: The Birds go play action. Hurts targets Brown about 20 yards down field and the pass is deflected. Darius Slay was all over Brown there. It wasn't an ideal pass and I'm not sure Brown ever had a chance to really come down with it.

• Play 4: Jalen Reagor, getting extra first-team reps with DeVonta Smith out with a groin injury, hauls in a 10-yard out strike from Hurts. Great toe-tap work by Reagor and there was some nice zip on the ball from Hurts. Much-needed positive rep for Reagor.

• Play 5: Brown motions right at the line of scrimmage and then Hurts hands it off Miles Sanders. Sanders hits the "B" gap for a marginal gain.

• Play 6: Weird play here. It appears to be a read option play that Hurts gives to Sanders before getting stuffed in backfield for a loss.

The next time the first-team offense takes the field, they start at the 35-yard line, increasingly moving in closer to the red zone in 7-on-7s...

• Play 7: Hurts dumps it off to the left to Sanders.

• Play 8: Hurts dials up a long pass right that hits Brown in the end zone for an undisputed "touchdown."

• Play 9: Hurts hits Zach Pascal at the goal line, who finds his way in for another "touchdown." Hurts gets into a rhythm here!

• Play 10: Browns runs an out-and-up route, going down the left sideline toward the end zone. Slay is sticking with Brown well all the way and Hurts overthrows Brown out of bounds.

• Play 11: Hurts finds Quez Watkins in the middle of the field for a gain of seven-or-so yards.

• Play 12: Dallas Goedert lines up wide left as an outside receiver, he motions right as the play gets started. Hurts tries to hit Goedert near the goal line, but it's a drop for the Eagles' TE1. Should've been caught and could've possibly been a "touchdown" if so.

The second-team O gets some reps before Hurts and the starters take the field once more for 11-on-11s from the 35-yard line going in...

• Play 13: It's a gain of eight-ish yards in the middle of the field on a throw from Hurts to Pascal, who had a strong day on Wednesday following a rough early training camp that included a hospital stay due to food poisoning.

• Play 14: Basically the same exact thing as the above play.

• Play 15: Hurts looks for Pascal yet again, but it's broken up on a short throw left.

• Play 16: With Sanders lined up wide left, Hurts takes the snap and almost immediately tucks the ball and runs up the gut. I'm guessing this was a designed draw?

• Play 17: As the Birds inch closer to the end zone, Hurts finds Watkins in the flat for a gain of about five yards. From what I could tell, Watkins was Hurts' first or second read there.

• Play 18: Probably Hurts' worst throw of the day... James Bradberry, who's had the strongest camp of any Eagle, breaks up an errant pass over the middle intended for Brown. Brown may have jammed his finger on this play, taking his glove off after in a bit of pain.

More 11-on-11 work when Hurts takes the field again, going from the 50 toward the end zone in a two-minute drill type of setting.

• Play 19: Hurts, who's found Brown time and time again during camp, hits the Birds' new star wideout 15 or so yards down field on a comeback route. Plenty of run-after-the-catch opportunities for Brown this summer, who's so great at breaking defensive backs' tackles and racking up YAC.

• Play 20: Hurts' pass is tipped at the line of scrimmage intended for Pascal. That's the second or third time I've seen Hurts have a pass deflected in camp. Minimizing that should be an obvious goal come September.

• Play 21: Goedert picks up a nice gain of about 15 yards on a slant route going left. Hurts found him easily.

In talking about how Hurts' has developed over the course of these 10 practices, his willingness to throw over the middle and to his left, two things he rarely did in 2021, has increased and so has the success of those plays. Hurts was going left more often early in camp with not great results. On Wednesday, it was clear he made some strides in that department. He's been crushing those over the middle slants the last couple of weeks too.

• Play 23: Decent pickup from Sanders on the ground after a hand off from Hurts.

• Play 24: While Hurts finished camp strong with an overall great day, he didn't end the specific practice on the greatest of notes. In the red zone, Hurts scrambles around and misfires on a pass to Reagor in the end zone. It was a missed opportunity.

I will say that when it comes to these throws in the red zone where Hurts is continuously looking for a target, he would likely tuck the ball and run into the end zone for a TD in a real game setting. The dude did have 10 rushing touchdowns last season.

That wraps it up for the #HurtsWatch ahead of Friday's preseason opener! This was a blast to cover in my first real, full-time time work covering the Eagles while focusing on the biggest x-factor for a team with high expectations. I'd give Hurts an A- on the day Wednesday and a B- on camp so far overall. The whole package isn't there, but he looks improved as a passer compared to 2021. That might be all the Eagles need to go from a nine-win team to an 11- or 12-win team.