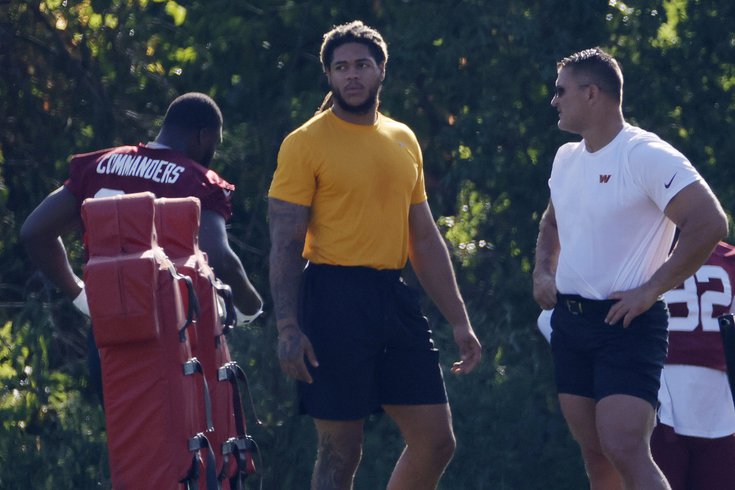 Training camps are underway league-wide, and as such, we'll start to see injuries trickle in around the NFL. Here we'll keep tabs on the Philadelphia Eagles' opponents, and notable players on those teams who are either recovering from injuries or facing suspensions.

• WR Jameson Williams: You probably remember Williams from draft season. He had surgery to repair a torn ACL in January, but got picked 12th overall in the 2022 NFL Draft anyway. He's on the NFI list and is unlikely to be ready to play by Week 1.

• DE Chase Young: Young is still recovering from a torn ACL and he began training camp on the PUP list. Ron Rivera said on Friday that Young will likely remain on the PUP list to begin the regular season.

If so, he would miss the first four games of the season, at a minimum.

• TE Logan Thomas: Like Young above, Thomas tore an ACL last season. Thomas' occurred on December 5, which was Week 13 against the Raiders, ending his season. He also had a hamstring injury earlier in the season that cost him six games. He is also on the PUP list.

• WR DeAndre Hopkins: The NFL announced in May that Hopkins was suspended for the first six games of the 2022 regular season for violating the league's policy on performance enhancing drugs.

• WR Michael Gallup: Gallup tore an ACL in a January 2 loss to the Cardinals. He had surgery to repair the ACL the first week of February.  He said on Friday that it is "not a reasonable possibility" that he will be ready for Week 1.

Michael Gallup will not be available for Cowboys season opener, he says. “That’s not a reasonable possibility.”

Gallup is currently on the PUP list. To be determined if he'll be ready to play by Week 6, and if so, whether he'll still be hampered by the injury.

• WR James Washington: Washington is expected to miss two months after breaking his foot in practice.

The Cowboys will be without WR James Washington for 6-10 weeks because of a fractured right foot suffered Monday, according to multiple sources. He is scheduled to undergo surgery on Tuesday in Dallas.

If Washington's recovery is on the longer end of that scale, he could miss this game, but it's more likely he's back in time.

While not one of the Cowboys' best players by any stretch, Washington is a potentially damaging loss because Dallas is already so thin at wide receiver. During the offseason, they traded Amari Cooper and lost Cedrick Wilson in free agency. Additionally, as noted above, the Cowboys will be without Gallup to start the season.

So what's left? The Cowboys still have CeeDee Lamb, but not much else. They selected Jalen Tolbert out of South Alabama in the third round of the 2022 NFL Draft. They also have Noah Brown, who has 425 receiving yards over a five-year NFL career. Otherwise, the eight other receivers on the Cowboys' roster have a combined zero NFL receptions.

No notable injuries, at least in terms of players who could be out as deep into the season as Week 8.

• WR John Metchie: The Texans released a statement from Metchie earlier this week that he has been diagnosed with leukemia.

Metchie is a rookie second-round pick who was potentially in line for a starting role on a Texans offense that lacks quality receivers. His health is what matters more here, obviously.

• Chase Young should be back for this game, I would imagine.

No notable injuries, at least in terms of players who could be out as deep into the season as Week 11. It is perhaps worth keeping an eye on star LB Shaquille Leonard, who is still on the PUP list while he recovers from back surgery, though questions of his return are centered around Week 1, not Week 11.

• LT David Bakhtiari: Bakhtiari is still having issues with an ACL tear suffered in 2020. In 2021 he played in the Packers' final regular season game, but had to come out after about a couple dozen snaps. He did not play in Green Bay's playoff loss to the 49ers. Just before the start of 2022 camp, he went on the PUP list, which came as a surprise to some.

It was revealed on Thursday that Bakhtiari had an offseason procedure done on his knee, "which would be at least his third known surgery since the initial injury on Dec. 31, 2020," according to Rob Demovsky of ESPN.

Bakhtiari is regarded as one of the best left tackles in the NFL.

No notable injuries, at least in terms of players who could be out as deep into the season as Week 13.

The Giants placed five players on the PUP or NFI lists prior to the start of camp. They are LB Azeez Ojulari, WR Sterling Shepard, OL Nick Gates, OT Matt Peart, and TE Daniel Bellinger.

• LB Roquan Smith: Smith may be the Bears' best player. He is "holding in" while trying to get a new contract. It is expected that Smith will eventually get paid and begin participating in practice. We'll see.

Gallup will almost certainly be ready to go by this point in the season.

According to a report from Mike Florio of ProFootballTalk in June, Kamara is looking at a lengthy suspension stemming from felony battery charges in Las Vegas.

Per a league source, Saints running back Alvin Kamara is bracing for a suspension of at least six weeks. The only question is when the suspension will be imposed...

The incident happened in Las Vegas, on Pro Bowl weekend. Kamara was questioned and arrested at Allegiant Stadium, after the Pro Bowl ended.

The Personal Conduct Policy provides for a baseline six-game suspension in the event of felony battery. Aggravating factors include repeated striking. Kamara reportedly told police that he threw a “couple punches.”

Kamara possibly could be placed on paid leave pending resolution of the criminal case, given that he faces a felony charge. He would still be subject to a potential unpaid suspension after the case is resolved.

Kamara has a preliminary hearing in Las Vegas on Monday.

The Eagles play the Saints Week 17, but perhaps more importantly, they own the Saints' first-round pick in 2023. The Saints were 9-4 in games Kamara played in 2021, and 0-4 in games he missed.