Birds stacked at tight end, but is there still room for improvement?

Continuing on once again with our offseason team needs series, we'll take a look at a position where the Eagles are stacked -- tight end.  We identified TE as the least glaring need on the team when we began this series. Let's look at what the Eagles have:

Brent Celek: Celek appears to be Chip Kelly's long lost son, and the best blocker of the bunch by far.

Zach Ertz: Ertz is a very talented (and perhaps underused) pass catcher.  Many (self included) expected Ertz to have a monster breakout season, which did not happen. He did however, improve on his numbers from a season ago, and has a high ceiling.

James Casey: The Eagles shelled out a decent amount of money (3 years, $12 million) during 2013 free agency to sign Casey. And then they drafted Ertz. As a result, Casey was buried behind Celek and Ertz on the depth chart, and he has averaged just 10.3 offensive snaps per game in his two year tenure with the team. However, he is a great special teams player, which is obviously something the Eagles heavily value. The Eagles have an interesting decision to make on Casey. They can save the full $4 million in salary cap space they owe Casey this season if they decide to cut him, but will they risk hurting their special teams units?

Trey Burton: Burton emerged as a valuable special teams player in his own right, and is a similar kind of "Swiss Army knife" player as Casey. Do the Eagles feel good enough about Burton to take on the (albeit minimal) role in the regular offense that Casey had? If so, that could mean that Burton's presence on the roster could sway the Eagles to use the $4 million they owe Casey elsewhere.

While there certainly isn't a glaring need to fix the tight end position, here are some players who could make sense for Philly in free agency and the draft: 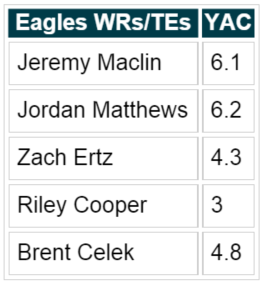 The Eagles struggled getting yards after the catch in 2014, and could use more weapons who can make things happen once they get the ball in their hands. To the right, note the Eagles' wide receivers and tight ends with at least 10 receptions last year and their average yards after the catch. (Those numbers are unimpressive, just FYI).

In 2014, Paul filled in for an injured Jordan Reed, and played well. He caught 39 passes for 507 yards, although he managed just one TD. But the stat that stands out is that he averaged 6.8 yards after the catch.

Paul has NFL experience both at WR and TE, which makes him the kind of versatile threat that Chip Kelly and Co seem to value. He is also a special teams contributor, which is a prerequisite for any reserve.

I can't see the Eagles spending a high draft pick on a TE, but an intriguing option in the later rounds could be a guy from a school right in Philadelphia's back yard. Unlike the rest of the positions in this series, we're going light on tight end draft prospects:

Boyle is a very under-the-radar prospect out of Delaware who was a versatile player for the Blue Hens, lining up out wide, as an in-line TE, and even occasionally in the backfield next to the QB. He also has the ability to long snap. At 6'5, 273, Boyle is big, versatile, and the type of player who could fit into Chip Kelly's offense. Boyle will be competing at the Senior Bowl this year. File this name away.