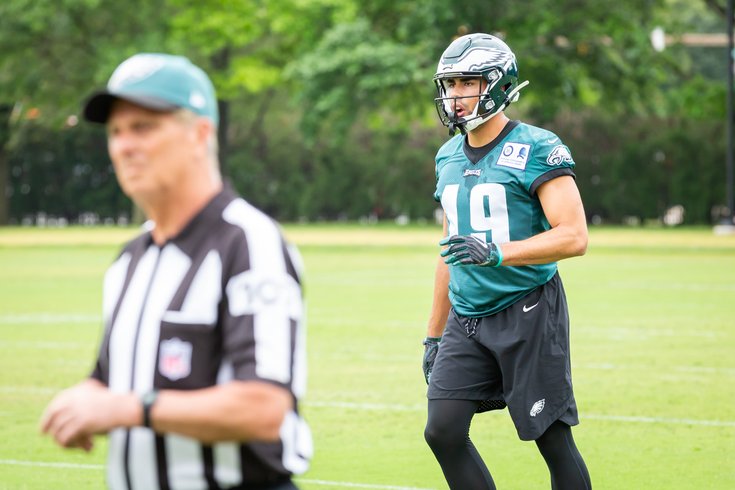 The Eagles will wrap up their final OTA practice on Thursday, and then they'll hold a three-day mini-camp next week from Monday to Wednesday, before dispersing for about six weeks leading up to training camp.

Wednesday' practice was open to the media, and as always, we have notes.

• Since we always start off with Carson Wentz, I guess we'll start there again today. Alshon Jeffery, DeSean Jackson, and Nelson Agholor were all out today, so he was working with players with whom he's mostly unfamiliar, and he wasn't sharp.

• Nate Sudfeld, on the other hand, had a nice practice. Sudfeld showed during the preseason last year that he throws a really nice touch pass, and is accurate down the field on deeper throws. He did that as well today.

His arm strength is OK, but he's not going to throw lasers from the opposite hash to the sideline 20 yards down the field. Where he does show some nice zip on his throws is in the middle of the field in the 10-20 yard range. He made a nice window throw in that area to Richard Rodgers in the end zone for a TD today.

• It was a very bad day for rookie fifth-round pick Clayton Thorson, who made a number of ugly throws:

• The play of the day was by J.J. Arcega-Whiteside, who smoked Jeremiah McKinnon in the red zone. Arcega-Whiteside juked the ever-living crap out of McKinnon on his route, which looked something like a stop-and-go. Sudfeld lofted an easy throw high to the back corner of the end zone for J.J. to go up and get it, which he did.

It's just OTAs, but Arcega-Whiteside looks like he can play a little.

• If I had to pick an early front-runner for the fourth defensive end job, I would go with Josh Sweat, who has been very active in practice, and has been around the quarterback a lot. It's also noteworthy that the Eagles have been lining him up a lot at LDE, when he primarily played RDE last year. Of course, LDE is the spot vacated by Chris Long, so his move to that side is worth mentioning. I do have a couple caveats in praising Sweat:

• The Eagles worked on hard counts both on Monday and today, a normal activity for this time of year. However, I feel like they're missing opportunities when they're able to get opposing defenders to jump offsides. The Eagles mostly employ the "ooga booga" method, as explained during the preseason last year by Mailata, via Sheil Kapadia of The Athletic.

Jordan Mailata on calling out defensive players when they jump offsides:

If you jump out of your stance via the "ooga booga," sure, you're getting five yards, and that's fine and good, but you're not capitalizing on the possibility of free shot down the field. Aaron Rodgers and the Packers, for example, do an outstanding job of making opposing defenses pay for either jumping offsides or failing to get their substitutions off the field quickly enough:

Jason Kelce explained that the Eagles will go after the free play sometimes, but they'll typically only do so on pre-determined play calls.

"Sometimes we do," Kelce said. "We have that in our playbook. If you go for the free play every time -- first of all, if you're wrong, you're in big trouble. Secondly, you want the quarterback and the receivers and everybody on the same page, so we'll have certain calls in situations where we will do that. It just hasn't happened in game situations for us that often. The majority of the time if we get an offsides, we'll jump out of our cleats, get the free five yards, and move on to the next play.

"Unless it's pre-determined that we have a built-in play to get to while trying to get someone to jump offsides, I'll have the green light to snap it, if that's built in. If we don't have that already planned out, just take the free five yards."

The "big trouble" Kelce is referring to is that if you snap the ball and don't get the call, you're potentially throwing the ball up for grabs down the field without the free play.

The way Rodgers executes those free plays probably looks a lot easier than it is. However, the Eagles employ a young, smart, talented, aggressive, improvisational quarterback in Carson Wentz, and I believe that he and the Eagles are capable of capitalizing more on those free opportunities like Rodgers has done so effectively for years.

• Joe Douglas was at practice today, like he was on Monday, after it's been widely reported that he's the front-runner to become the new GM for the New York Jets.