Plus, more from the AO1 Foundation event and a recap of the Roots Picnic. 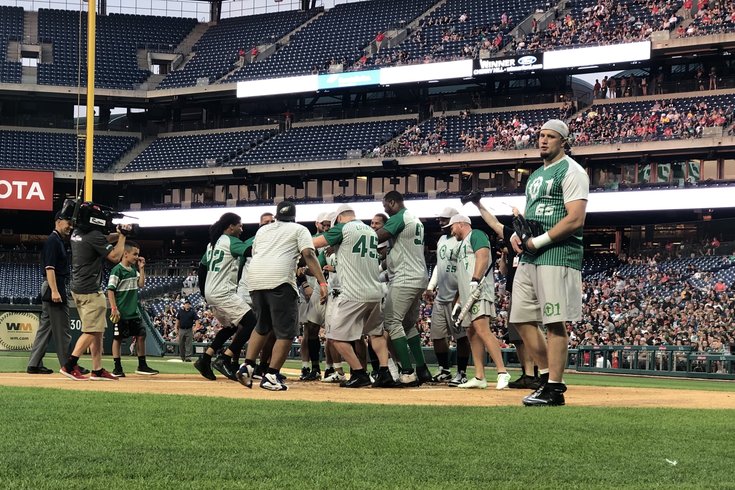 We are excited to introduce Natalie Egenolf's weekly column at the PhillyVoice. You may know Natalie from radio and TV (or on Twitter). She can be seen and heard on The Mike Missanelli Show from 2pm-6pm on 97.5 The Fanatic and NBC Sports Philadelphia. Originally from Northeast Philly, Natalie will be writing not only about sports, but music and pop culture in the city she loves.

No one knows the fans better than Natalie. Be sure to check back each and every week to find out what's on Natalie's mind.

Summer in Philly is off to a whirling start.

While your first-in-the-NL-East Phillies battled the NL's best team, the Dodgers, over the weekend in California, the crack of the bat could still be heard on Friday night echoing from Citizens Bank Park. That's because Eagles quarterback Carson Wentz and his teammates were renting the space for the evening for the 2nd annual AO1 Foundation Charity Softball Tournament.

Perhaps the best part of the game was hearing each players walk up song. Naturally, I had some thoughts on the selections:

• Richard Rodgers: "Circle of Life," The Lion King — The Circle of Life does not get the respect it deserves. It’s a song of the ages that stands the test of time and a song that leads to walk-off home runs, no surprise.

• Wendell Smallwood: "Hardball," Lil' Bow Wow & Lil' Wayne — If Wendell wanted to unintentionally make me cry while thinking about one of the most tragic movie scenes in the history of cinema by invoking G Baby, then mission accomplished.

• Nate Sudfeld: "Baby Shark," Pinkfong — I don’t understand the Baby Shark thing but I know it’s a thing. Clearly, it’s a thing that your backup QB enjoys. Part of me wonders if posting this will give opposing defenses ammunition. The last thing we need is “doo doo doo doo doo doo” taunting on the field.

• Jason Kelce: "Who Let the Dogs Out," Baha Men — Jason Kelce gets fired up to the hottest welcome-to-the-millennium, grade-school dance song known to mankind. Has there been a "Where Are They Now" done on the Baha Men?

• Avonte Maddox: "Nonstop," Drake | JJ Arcega-Whiteside: "Gyalchester," Drake — File these choices under "songs that I will absolutely not listen to until the NBA finals are over." Honestly, I may not be able to listen to them until next basketball season, when the obnoxiousness of Drake has been erased from my brain ... if that’s even possible.

• Rasul Douglas: "Higher," DJ Khaled feat. Nipsey Hussle | DeSean Jackson: "Last Time That I Checked," Nipsey Hussle | Jordan Howard: "Loaded Bases," Nipsey Hussle — A few of the birds paid tribute to the late Nipsey Hussle with their selections. In addition to this song tribute, Desean Jackson will be wearing Nipsey cleats throughout the entire 2019-2020 season to honor his late friend.

• Jordan Mailata: "Welcome to the Jungle," Guns N' Roses — If Guns N' Roses is what gets you from Austrailian rugby in Australia to the NFL, then so be it. If he makes his debut this year, I petition we call him Slash.

Some of the other songs selected: 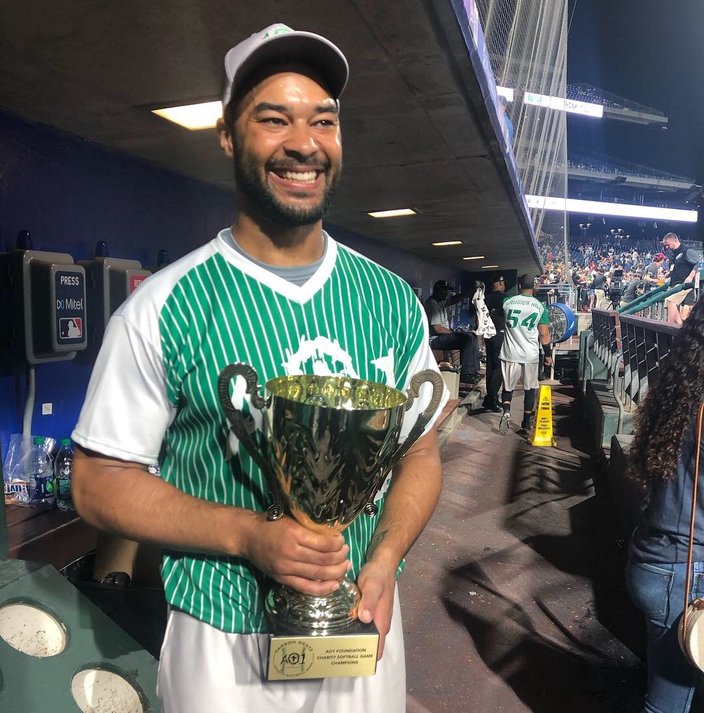 If you’re unfamiliar with the charity, The AO1 Foundation has three parts, the Outdoor Ministry, The Haiti Sports Complex and “Thy Kingdom Crumb” Foodtruck for the homeless (and a soon to be ice cream truck!). 15,000 Eagles faithful watched diligently as the Eagles offense took on the Eagles defense in what felt like a game of rec-league softball intertwined with silly field day games such as:

And “Hike the roll of toilet paper to your teammate for them to catch with their feet and then they put it in the trash can!”

While we still have a few months until football season to see how Wentz does on the football field, the city can take some solace in the fact that off the field, his work is a grand slam for impacting thousands of less fortunate here in Philadelphia, around the United States and in Haiti.

The Roots Picnic Finds a New Home in Fairmount Park

Close to 25,000 people packed The Mann Center at Fairmount Park on Saturday to experience the 12th annual Roots Picnic. The former home of the picnic, Festival Pier, closed over the winter. The new Mann Center set up featured three stages that sprawled over acres of land in Fairmount Park. The spacious site also touted an arcade with lounge furniture, a lifestyle tent which held a book singing by rapper Common and a panel on women’s empowerment, food trucks, a Patron tequila pop-up lounge, live mural painting exhibition, a community playground with an array of games and food and beverage stands that lined the venue. 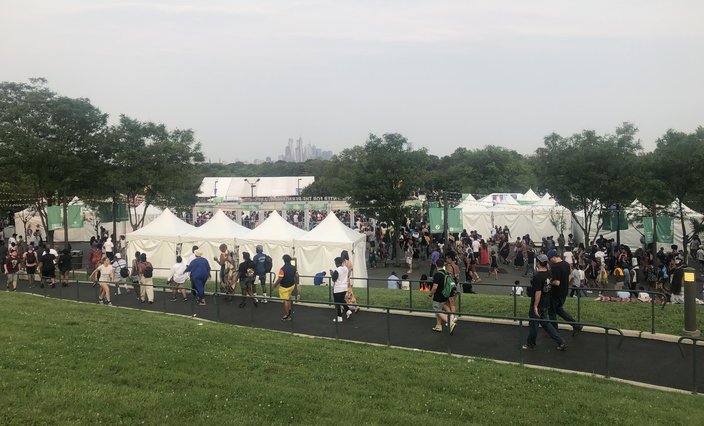 A look at the new venue for the Roots Picnic.

Concert goers weathered the steamy temps throughout the day to see their favorite artists. A few of my highlights from the day include:

&More: West Philadelphia’s own Chill Moody and Donn T blended hip-hop and R&B to deliver an incredibly motivational message while utilizing the whole Mann Stage to draw in their audience (If you haven’t heard of them yet, check out their Tiny Desk Series).

Black Thought & J. Period Live Mixtape ft. Yasiin Bey: In another installment of the Live Mixtape, Black Thought and J. Period featured Yasiin Bey (a.k.a., Mos Def) for a performance of epic proportion. The two seamlessly intertwined lyrics for a flawless and breathtaking set to get lost in.

H.E.R.: Not only did H.E.R’s powerful sultry voice carry throughout the air around Fairmount Park, she then busted out an electric guitar for a mesmerizing breakdown to send the whole performance over the top.

The Roots: Duh! A 20th Anniversary performance of their 4th studio album “Things Fall Apart” was a grand finale in itself until they brought out Common, Yasiin Bey (Mos Def), Jill Scott, Beanie Sigel, Freeway and yes, Chris and Neef for a State Property reunion. I don’t quite think there’s possibly a more Philadelphia grand finale than this. 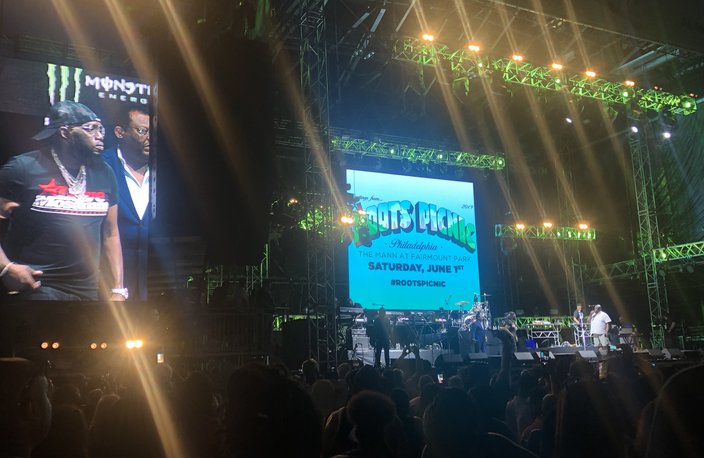 Of course, I have to mention the unfortunate news headline of the event, the stampede at The Fairmount stage where five people were injured. I was at The Mann stage when the event unfolded so I can’t speak on the scene or what happened. I can say that outside of this isolated incident that was the result of the world-we-live-in-induced-panic, The Roots Picnic was a peaceful day filled with good vibes, great music, and a perfect way to usher in summertime in Philadelphia.