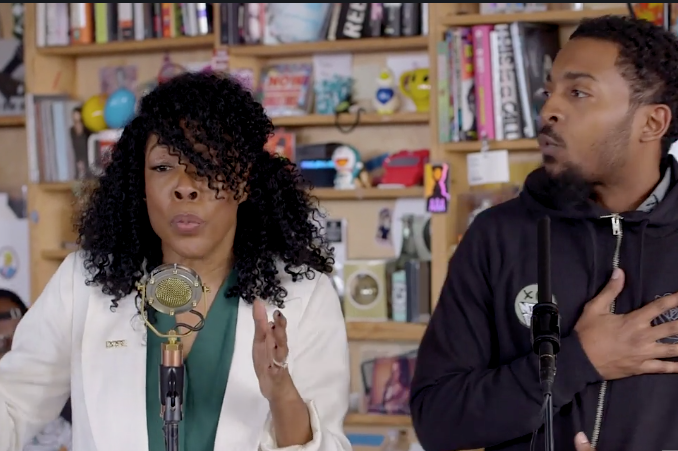 &More perfoms their single, "My Own Light."

After starting off their set with "My Own Light," Donn T comments, “Big challenges come unto the path with folks with big destinies. I know that sounded jumbled, but if you have big challenges you somehow have a big destiny ahead of you. I was so moved by that, because we’re all sorely challenged right now, our society, and we have to keep that in mind in order to create a better future.”

Chill Moody, after announcing it’s his 34th birthday, quickly noticed Donn T walking up to him with a strawberry shortcake in hand. He adds, “That’s my favorite jawn right there.”

Chill Moody, a rapper from West Philadelphia, met R&B singer, Donn T, when the two collaborated on a song, "Clear," in 2017. The two then joined forces and started the hip-hop group &More. The group made their debut at the 2018 Roots Jam Session during Grammy Week. The group was featured this year in the "The Austin 100" for their performance at SXSW.

The group performed the second song of their set, "Future Come Around," before ending on their 2018 Tiny Desk Contest submission, "Whoa." The song, which was inspired by the book, "The Hate U Give," dives into the ways the country deals with racism and police violence. It will be featured on their new album with a guest appearance from Public Enemy's Chuck D.  The group will be releasing their debut album, "Ethyl Bobcat," on April 5.