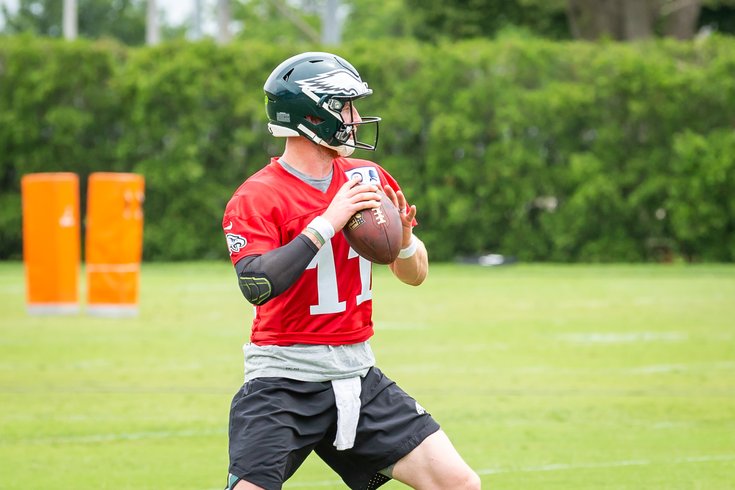 The Philadelphia Eagles kicked off their third set of OTAs on Monday, which was open to the media. Unlike the media-attended session a week ago, this practice had a little less juice. Still, as always, we have practice notes.

• Is it getting tiresome to note that Carson Wentz looks really, really good? Today, I can count one throw he'd like to have back, an underthrown deep throw to DeSean Jackson that was broken up easily by Jeremiah McKinnon. Otherwise, Wentz was dialed in, as usual, and was dropping dimes all over the field. The highlights:

Wentz is really good, and it's pretty easy to predict that he'll have a big year if he can stay healthy.

• The Eagles showed some empty sets today, as in empty backfield, with no running backs on the field. That is a set that makes a whole lot of sense for the Eagles' personnel that will allow Wentz to have Alshon Jeffery, DeSean Jackson, Nelson Agholor, Zach Ertz, and Dallas Goedert all on the field at the same time. It'll be very hard for a number of teams to match up against all that talent.

• The player of the day defensively? Deiondre Hall, obviously. He had a couple nice pass breakups in which he was able to use his 6'2 frame to sky for balls over the middle. On one, he was able to tip the ball to himself for a pick. Hall is a player the Eagles traded for in September last year, and then simply wouldn't put in games despite an absurd number of injuries to the secondary.

Perhaps with a full offseason with the team, he can push guys like Tre Sullivan and Andrew Sendejo for roster spots and/or playing time.

"We have a player Boston Scott, who's been on our roster since the end of last season or halfway through," Pederson said. "He's a guy that can kind of fill a Darren Sproles [role]. He's in that same body type and same quickness. We're working him in a couple of different situations as a runner, as a punt returner, and just kind of getting a feel for him because he wasn't a guy we initially brought onto our team early.

"Of course, there's other guys, but he's kind of been the one that, if you say you're going to try to replace Darren, which you really can't, he would be the guy that has kind of taken that role over right now."

The absence of Sproles has left an opening for the Eagles' punt returner role, which makes Scott a player to watch for a roster spot. That said, I haven't seen much from Scott so far. In my opinion, Donnel Pumphrey has shown more this spring.

• Wentz to DeSean hasn't been the only dynamic duo at OTAs. Nate Sudfeld and AAF superstar Charles Johnson connected for three TDs today.

• The No. 3 and No. 4 quarterbacks, Clayton Thorson and Cody Kessler, haven't shown much at all. Thorson is still getting acclimated to the NFL, so that makes sense. Kessler arm strength, meanwhile, is sorely lacking. Sorry if I'm beating that dead horse.

• Pederson was asked about Mack Hollins, who went on IR in September last year with a groin/hernia injury, and hasn't practiced yet this offseason. Pederson said Hollins is "progressing well," which is an odd way to categorize the status of player with a common injury that is keeping him out for over nine months now. The Eagles' list of curious medical cases continues to grow.

• The rookie undrafted free agent who has shown the most in media-attended practices so far is LB T.J. Edwards, a player that I felt was worthy of a mid- to late-round pick.