On Thursday, the Philadelphia Eagles held their final media-attended OTA practice. As always, we have notes, and today we'll begin with the rookies, who all had some notable moments.

• Derek Barnett was in the backfield regularly, battling against Lane Johnson. The rookie was clearly getting the best of Johnson working at RDE, with Johnson at LT. Barnett has looked good all throughout OTAs and is looking like a candidate to start early in his career.

• Sidney Jones is no longer wearing a boot, per Doug Pederson.

• Rasul Douglas didn't have any really notable plays to report today, however, he was working with the first-team offense ahead of Patrick Robinson. This is a new development. Previously, Douglas was coming as an extra defensive back as a nickel, playing outside with Jalen Mills kicking inside. Today was the first media-attended practice that Douglas was with the starters in the base defense.

• Mack Hollins continues to look solid. He has shown good hands, particularly for a player with only 81 career catches in college. It's early, but Hollins has exceeded my expectations as a receiver so far.

• On one running play, Donnel Pumphrey got to the edge and juked the living crap out of Jalen Mills, who was left flat-footed as Pumphrey ran right by him. Mills could only look to the sky and collect a few "it's ok" butt slaps from his teammates.

• Shelton Gibson is really struggling. During drills, with no defenders on the field, Gibson dropped three passes. He also triple caught a fourth pass that would have been easily knocked away in any sort of competitive situation. In team drills, in four media-attended practices, I cannot recall Gibson making a single catch.

He has also been corrected quite a bit on his route running. For example, WR coach Mike Groh got on Gibson today multiple times for not attacking the football. On an in route, Gibson was beginning to head upfield before he had the ball, like this: 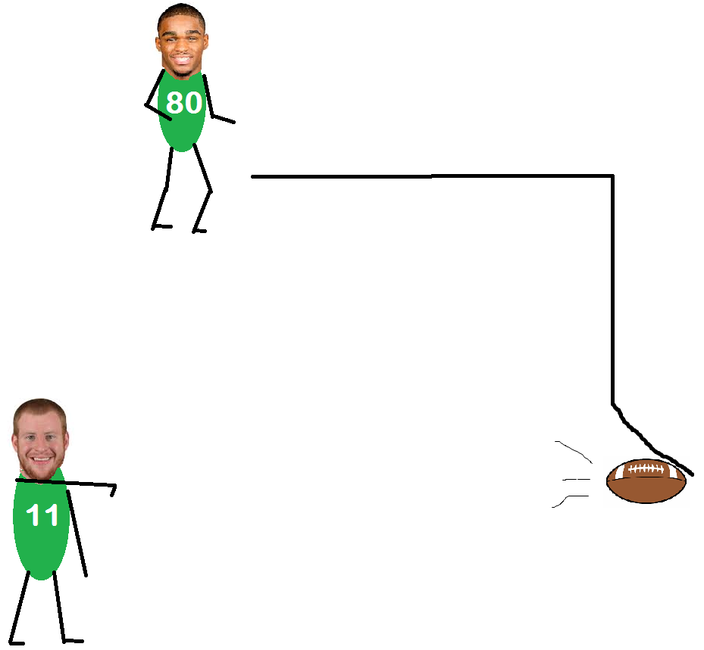 In the pros, defensive backs in trail position can jump in front of receivers and pick off passes when you do that. Groh instructed Gibson to stay on his line, attack the football, and then head upfield, like this: 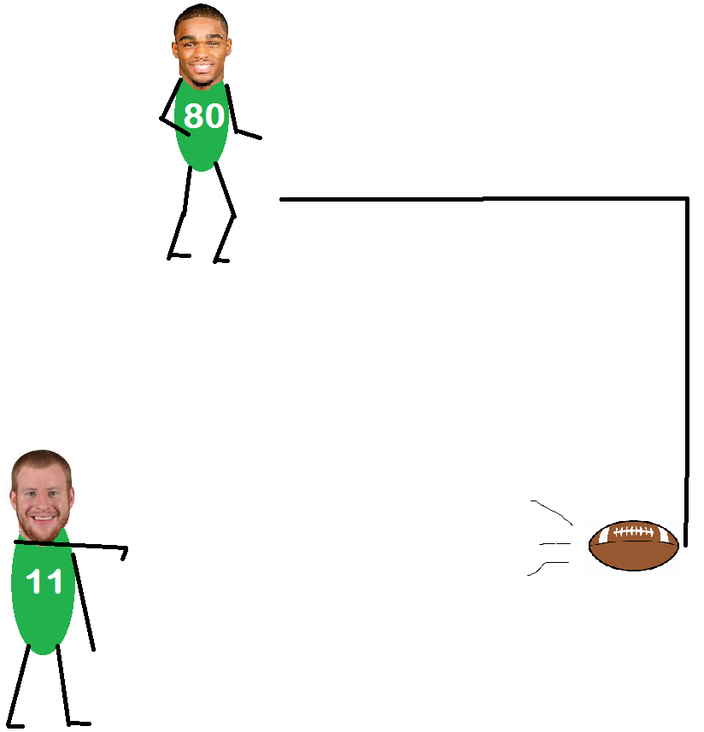 • Elijah Qualls is still absent (as is Jones), as their schools are on the quarters system.

OK, onto the vets:

• The defense kicked the offense's ass today. Defenders got hands on passes all day long, as the Eagles' receivers, tight ends, and running backs struggled getting separation all day. Part of that was because the Eagles were running red zone team drills, and obviously, it gets congested down there, but the defense was still overly dominant.

• Carson Wentz had some ugly throws today. He threw one pass directly to Najee Goode, with no receivers in the area. Wentz faced quick pressure and just unloaded it. It was a gift pick six for the defense.

On the next play, he was nearly picked by Malcolm Jenkins looking for a running back in the flat.

During one red zone drill, Wentz had eight consecutive incompletions. His receivers weren't getting open, but the offense looked very sloppy nevertheless.

Of course, all the "it's only OTAs" caveats apply, but it would still be preferable if Wentz looked better. I will note that Wentz did have one very pretty touch throw to Zach Ertz in the red zone. It had to be in the right spot, and it was.

• Ertz looks bigger this year. I'll ask if he added weight this season.

• We had our first extracurricular activity today. At the end of one play, newcomer Gabe Wright was knocked to the ground by Jason Kelce, who appeared to be apologizing. Wright then slapped Kelce in the head hard, as in, not like a friendly helmet slap. Kelce started screaming obscenities in Wright's face,  but there was no fight.

• Halapoulivaati Vaitai got a little shaken up today. It looked like he dinged up his hip.

The next round of media-attended practices will be a mandatory three-day minicamp beginning Tuesday, June 13.