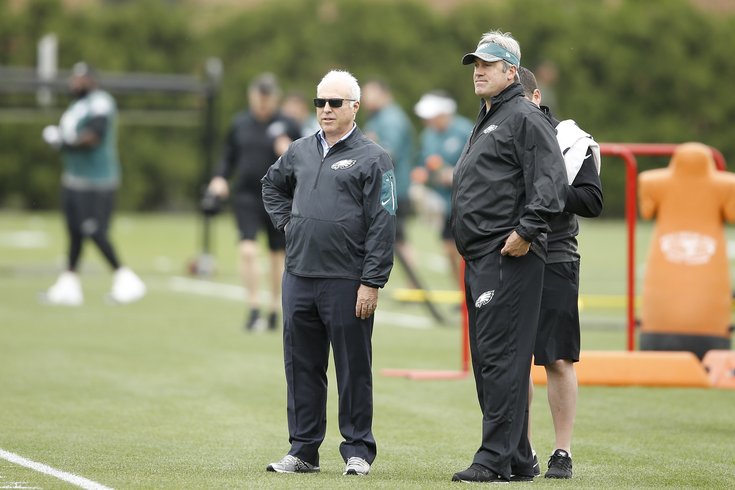 During the pre-draft process, I had convinced myself that the Eagles were going to target a running back who was skilled in catching the ball out of the backfield. In a West Coast system, it stood to reason to me that Doug Pederson would want a player like Brian Westbrook or Jamaal Charles, each of whom has made a living in the NFL making plays in the passing game.

Wendell Smallwood was not on my radar. In 2015, Smallwood had 26 catches for 160 yards (a low 6.2 YPC average), and a long reception of just 15 yards. Over his college career, he didn't have a single receiving touchdown.

However, after watching Smallwood in practice at the Eagles' first OTA session, it's a lot more clear why the Eagles like him. That guy can catch the football. With Darren Sproles staying away from voluntary practices, Smallwood got a ton of reps, both with the twos and threes. He made the most of his added work, catching at least a dozen passes all over field, some more difficult than others, in the rain. He was very impressive in that regard.

After practice, Doug Pederson was asked what he liked about Smallwood's game, and he was quick to point out his pass-catching ability.

"Here is a guy I think can be explosive, has shown some explosiveness," Pederson said. "I really like the fact how he catches the football out of the backfield. I think that is something that is just a gift that he has. He's a natural, a natural pass catcher."

At West Virginia, as we showed in a film breakdown of Smallwood's game, the Mountaineers didn't take advantage of Smallwood's receiving abilities, at least during his final season there. On pass plays, they would often simply send him out into the flat as a safety valve, and little more.

Smallwood still has a ways to go in pass protection before the Eagles will trust him on the field in passing situations, but there's no question he has ability as a receiver.

• Here were the first-, second-, and third-team offensive line units:

To note, rookie third-round pick Isaac Seumalo will miss a chunk of OTAs because his college (Oregon State) runs on the quarters system.

• The Eagles' first-, second-, and third-team defenses looked like this:

Beau Allen did not practice, and obviously, Fletcher Cox remains away from the team, for now.

Jordan Hicks did not practice. "Jordan's got a little tightness right now, so it's a maintenance thing – nothing severe with him at all," said Pederson. "Just want to be precautionary more than anything. I told Jordan, ‘Listen, now is not the time to test it. Let's make sure you're ready to go.’"

Pederson explained that the tightness was in Hicks' legs, not his pectoral muscle that ended his season a year ago.

Nolan Carroll and JaCorey Shepherd did not practice. Also, I wouldn't make too much of Eric Rowe being with the twos. He came in with the ones in nickel situations, playing on the outside, with Ron Brooks moving inside to the slot. But my bet is that Jim Schwartz just has his former Buffalo guys in with the ones early because they already know his defense.

• Leodis McKelvin had a good day. He stripped Josh Huff and had a nice pass breakup down the sideline. After his pass breakup, he loudly yelled obscenities. McKelvin, I should note, wears these super baggy pants during practice. They're the pants equivalent of Sam Bradford's sleeves.

• Rowe had a nice day as well. On one play, Nelson Agholor couldn't get off the line of scrimmage on a Rowe jam. Later, Rowe had a nice PBU using "look and lean" technique down the sideline. That play got DB coach Cory Undlin all fired up.

• Sam Bradford's off-the-field nonsense didn't carry over onto the field. He was sharp, with his highlight of the day being a nice deep ball down the sideline to Jordan Matthews. In OTAs a season ago, Bradford participated but was not a full go like he is this season. That should help him.

• Bradford did throw a pick-six to Rodney McLeod but give McLeod the credit there. McLeod diagnosed the route and exploded up from his centerfield spot to jump the route and take it back for a score. Impressive.

• Denzel Rice had a good day as well. He intercepted a certain redheaded quarterback we'll get to in a second. Rice also had a strip/scoop/score off an Eagles receiver.

• Trey Burton seemed to be getting open quite a bit and making catches deep down the field. I felt he was underused a season ago by Chip Kelly, and his ability warranted more opportunities. We'll see if gets them under Pederson.

• And of course, I'd be remiss if I didn't mention one Mr. Carson Wentz. Should we call this "The Carson Daily" from now on? Yes? OK, sweet. Introducing...

Wentz looked OK in his first day at OTAs. I've seen better from him in person at the Senior Bowl. One small thing that did stand out to me was he ripped a pump fake in the rain with full velocity on his throwing motion, pulled it back, and then made the throw, Roethlisberger style. That may sound like no big deal, but not every quarterback can do that. Wentz has 10" hands that allow him to grip the football tightly like that. To be clear, I don't want to make too much of a pump fake -- it's just a nice added weapon in his arsenal.

The next time we'll get to see the boys on the field will be next Tuesday.