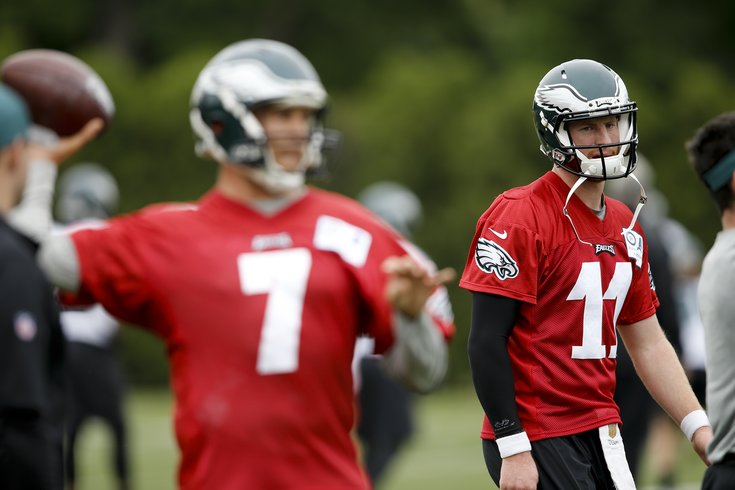 For rookie Carson Wentz, class is already in session.

There's more than one way to lead by example.

And it's the latter with which Philadelphia Eagles quarterback Sam Bradford's tutelage of rookie Carson Wentz has commenced.

For the second overall pick in last month's draft, Tuesday afternoon served as a lesson in how not to act. Not because Bradford said the wrong thing in his first public comments since his agent, Tom Condon, requested a trade, but because this whole charade that has been surrounding the Eagles since they moved up to get Wentz could have easily been avoided.

"I get it," he said when asked about the fans' frustration. "They have every right to be frustrated. I think the only thing I can do moving forward is to continue to get better and to go out there on Sunday starting in September and play good football, win football games and hopefully win them back.

"I don't think there is anything I can say. I think it's all about my actions now and how I play going forward."

Fans, especially in this city, don't tend to forget -- and are even less likely to forgive -- public mistakes like the one Bradford's camp made. It's directly related to their passion for this team. The more you care about something, the more you emotionally invest in it, the longer you'll hold a grudge.

And this city has quite a bit of emotion, both the good and the bad, tied to its football team.

The fact that Wentz was able to learn this lesson so early in his NFL career will serve him well moving forward. If Bradford is the teacher, then he should be thanked for moving this up to the beginning of the class syllabus.

Luckily, Wentz will have more than just Bradford to rely on for advice. His coach, a rookie in his own right, also played the position and understands that transitioning from a relatively small North Dakota program to one as highly covered and over-scrutinized as the Eagles requires more than just learning the Xs and Os.

"My plan is to keep developing Carson," head coach Doug Pederson said. "Carson has a lot to learn, not only from the playbook but just how to be a professional quarterback, how to handle the media, how to handle Philadelphia, his teammates. [He has to] get to know his teammates.

"I understand his situation," said Pederson, who reiterated that Bradford was his starting QB. "I go back to 1999, when I was brought here by Andy Reid to do a job when they drafted Donovan McNabb. So I understand the situation. I get the feeling. I get the emotion."

While that don't-make-the-same-mistakes-I-did approach works well for off the field matters or dealing with the media, it doesn't have nearly the same effect on the field -- largely because Wentz already knows what's at stake when lines up behind center. The results are more binary: you either complete the pass or you don't; you either score a touchdown or settle for a field goal; you win or you lose; you play or you get benched.

But if Wentz hopes to produce the kind of results expected from a No. 2 pick, his game will still need some work. And as Professor Bradford moves forward with his lesson plan, he'll need to make sure he changes teaching techniques and begins leading by example instead.

However, given the attitude Bradford has already shown regarding the arrival of Wentz, it's fair to wonder how open he will be to grooming his replacement. But according to Pederson, who ironically found himself in an eerily similar situation almost 20 years ago, there's no need to worry.

"I understand his situation," said Pederson, who reiterated that Bradford was his starting QB. "I go back to 1999, when I was brought here by Andy Reid to do a job when they drafted Donovan McNabb. So I understand the situation. I get the feeling. I get the emotion. But at the same time, we're professionals about it. I've told Sam all along -- and I've told you guys all along -- that he's my guy. I'm not looking back over my shoulder and the message to [Bradford] was the same."

Whatever the specifics of that message were, they seem to have been received loud and clear by the 28-year-old starter.

"We've been together the past couple days," Bradford said of his interactions with Wentz since his return to practice. "Obviously, I understand what it's like to be in his position. When I came in as a rookie, I had A.J. Feeley in St. Louis with me and he was great. He taught me a lot and kind of really took me under his wing.

But that may be easier said than done. No matter what his intentions are, it's going to hard for Bradford to feel 100 percent comfortable grooming his inevitable replacement. It's only human nature.

It's going to get really awkward, right?

"Not at all," Bradford said. "I think if I wasn't willing to [mentor Wentz], that's just not having any respect for the game. I think that's how this is. It's the job of older players in this league to try to help the younger guys out. I was very fortunate when I was younger to have someone do that for me. So I think it's only right that I try to do the same thing now."

Given all the lessons a rookie can glean from Bradford's most recent misstep, he's off to a pretty good start whether he knows it or not.

The difficult task ahead for Wentz is deciding when to follow the leader, and when to do the opposite.