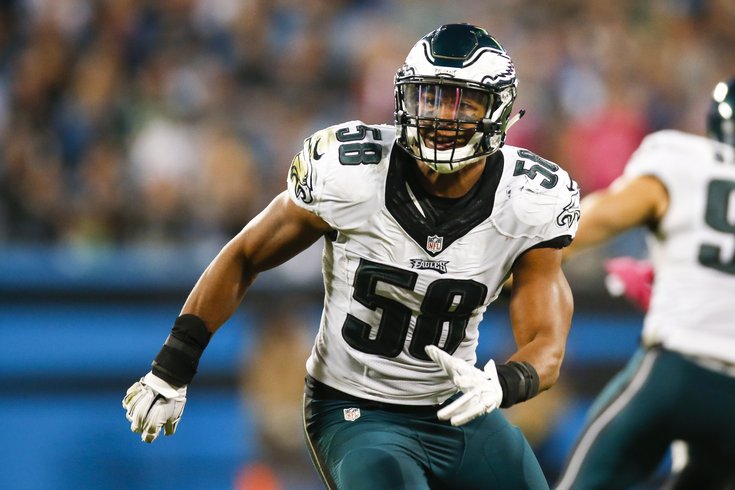 No NFL team is going to go through a full season unscathed in the injury department. However, if the Eagles can get through the 2016 season with their most important players staying intact, they could be in decent position to go back to the playoffs in an awful NFC East, although they certainly don't look anything like Super Bowl contenders.

Below are the 10 players the Eagles can least afford to lose to injury. Obviously, some of the below choices are the Eagles' best players, but we tried to also consider their importance to the scheme, depth behind them, long-term vs short term effects, and other factors.

Should Peters go down, you're probably looking at Lane Johnson sliding over to left tackle, and someone like Dennis Kelly filling in at right tackle. Peters' career is winding down, and there's a decent chance the 2016 season could be his last in the NFL. The Eagles have a legitimate replacement for Peters in Johnson, but the vacated right tackle spot would instantly become a big problem.

Johnson's move over the left tackle might actually not be the worst thing. He could begin to get comfortable there in a season in which the Eagles, as noted above, are highly unlikely to be Super Bowl contenders.

I watched a decent amount of McLeod prior to free agency, and had identified him as a potential Eagles target. I think Eagles fans are going to be pleasantly surprised by how good this guy is. McLeod possesses similar athleticism to Walter Thurmond, but is a more physical player in run support and as an enforcer on the back end.

In his second season in the NFL, Matthews caught 85 passes for 997 yards and 8 TDs. Here is what the rest of the Eagles' receivers produced:

In other words, here's what Matthews' numbers looked like compared to all the other Eagles' wide receivers combined:

While they hope that Nelson Agholor can step his game up from a disappointing rookie season, the Eagles may need Matthews to be their volume catcher once again in 2016. If he were to go down, there's nobody else even remotely proven to handle that role at wide receiver.

After a promising rookie season, most assume that Rowe will start at one cornerback spot in 2016. Rowe will first have to live up to expectations and earn that job in training camp. Heading into the 2017 offseason, there's a good bet that corner will be somewhere near the top of the Eagles' needs list. It would be far more preferable to feel really good about at least one of the corner spots.

Ideally, Bradford will play well enough in 2016 that other teams around the league will forget about how he acted this offseason and pony up a decent 2017 draft pick for him in return. Should Bradford stay healthy, perhaps some of his injury-prone stigma will go away.

The Eagles are counting on Johnson to be the left tackle of the future, and he has a chance to be a good one. Offensive tackle is likely to be the Eagles' biggest need next offseason if Jason Peters retires or is no longer playing at a high level. Having Johnson playing well heading into 2017 will help alleviate concerns about Carson Wentz's blind side.

Jenkins might be the most underrated player on the team. There isn't anything he doesn't do well from the safety spot. He can play centerfield, he can cover slot receivers, you can move him close to the line of scrimmage and he'll make physical tackles, and he always seems to put himself in position to make huge plays.

If he could juuuuussssst hold onto some more interceptions, we'd be talking about him like he's something close to Ed Reed.

Hicks was a steal in the 2015 NFL Draft, but he slid to the third round because of his injury history. After a brilliant start to his rookie season, he was lost for the year with a torn pectoral muscle. If he can stay healthy, Hicks could be a stud player in the middle of the Eagles' defense for the foreseeable future. It would be reassuring to see him survive a 16-game NFL schedule.

Additionally, have you looked at the Eagles' depth at linebacker?

I'd be mildly surprised if Cox didn't get a very lucrative contract worked out with the Eagles by the start of training camp. I'd be very surprised if the two sides couldn't get a deal done by the beginning of the season. Cox is the Eagles' best player. He's a legitimate star who they can build their defense around. Seeing Cox suffer some kind of serious injury after signing a long-term deal would be disastrous.

I mean, Wentz is only going to determine the fate of a whole lot of jobs in the Eagles' front office, as well as the general happiness of the fifth-most populous city in America.

Yes, I'm well aware the plan may be for Wentz to sit for a year. Still, it'd be nice if he can steer clear of some kind of devastating long term injury and become the next, uh, Sam Bradford.