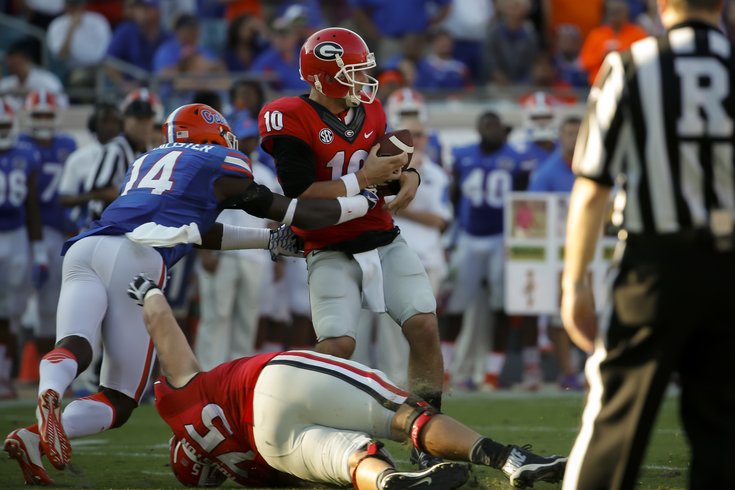 Alex McCalister is a one trick pony, but it's a nice trick.

A number of the Eagles' selections in the 2016 NFL Draft have had off-the-field issues, and the coverage of them has focused initially on that. Sunday, we began looking at those players on the field, beginning with Eagles fifth round running back Wendell Smallwood.

McCalister was a pass rush specialist at Florida, playing in less than 40 percent of his team's snaps over the last two seasons, mainly on passing downs. In 2015, he tied for the Gators' team lead with 6.5 sacks despite only playing in nine games. In 2014, he was second on the team to Dante Fowler Jr. with 6.5 sacks.

Here's a look at his strengths and weaknesses.

McCalister is 6'6, with 36" arms. He also has very good speed and athleticism. That combination of length and speed alone allowed him to get to the quarterback at Florida.

When rushing from the right side of the line (against left tackles), his bread and butter move was to stick his long left arm into the chest of the opposing left tackle, keep him at bay, and use his speed around the edge. Watch how this Kentucky LT can't even reach McCalister, so he has to grab whatever he can. Huge advantage:

And again, simple but effective:

When he rushes from the left side of the defensive line (against right tackles), his bread and butter move is a speed rush around the edge in which he has impressive bend, especially for a guy who is 6'6. That is how he got a large number of his sacks. I'll just show a bunch of them here:

Here's one where he uses his long arms, and then dips underneath for the sack:

Pretty much everything else. I'll enumerate what I didn't like here:

• McCalister has a wholly unimpressive repertoire of pass rush moves. At the NFL level, every offensive tackle in the NFL will have a counter to that dip move if they know it's coming. In college, he could get away with being a one-trick pony. In the NFL, McCalister is going to have to develop a larger catalog of effective pass rush moves, if only to keep opposing blockers honest, and not completely focused on his impressive dip.

• Once his initial pass rush move doesn't work, McCalister is toast. He doesn't have any counters or secondary moves if the first one has failed. There is far too much of the following going on in his games. Here he is working against the right tackle:

• You'd prefer to see him finish more strongly. In the sacks shown above, the quarterback did not go down violently. There's a bit of a struggle there. I wonder if stronger, sturdier quarterbacks in the NFL will be able to get away from McCalister even when he gets there, like this:

• He's slow to recognize fakes. When teams ran zone read against Florida, McCalister was often out of position. He also did a poor job on some occasions I saw teams run the option. While there will be teams who don't use those looks in the pros, it does perhaps signal a lack of football IQ.

• At around 240 pounds, McCalister can be moved in the run game. Worse, his hustle often sucks. The following play has so much badness. First he gets washed down the line of scrimmage, then he stands and watches as his teammates miss tackles, then he realizes "Oh crap, they didn't get him," followed by a half-hearted chase down the sideline. Not good:

It's obvious why the Eagles like McCalister. In Jim Schwartz's scheme, McCalister could be used way out on the edge in wide-nine looks and give opposing offensive tackles fits with his length and speed.

However, with his current skill set, that's about the only way he can used and even then he'll need to develop more pass rush moves to be effective.