Eagles notes: A second look at the absolute steal the Eagles got by moving from 13 to 8 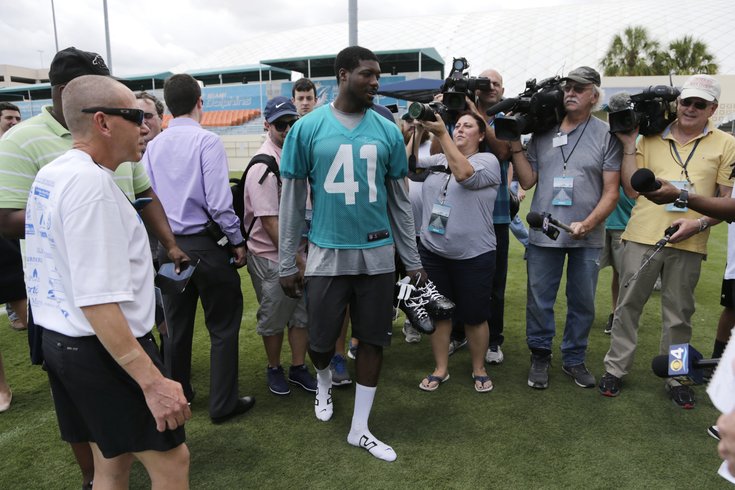 What would you rather have -- Byron Maxwell and Kiko Alonso, or second- and third-round picks?

When the Philadelphia Eagles traded up from the eighth-overall pick to the second-overall pick to select Carson Wentz, they paid a stiff price. Here were the details of that trade, as a quick reminder:

Some believe the cost was too high. Others believe that the cost was appropriate for a franchise quarterback. Whatever the case, the above trade would not have been possible without the Eagles having first moved from the 13th overall pick to pick No. 8.

To move from 13 to 8, the Eagles gave up next to nothing. They traded disappointing cornerback Byron Maxwell, while also shaving nearly $5 million off their salary cap in the process, as well as an ineffective Kiko Alonso. Honestly, would anyone really care all that much if either of those players just gone with no compensation in return?

That trade was absolute robbery, especially when you compare it to a similar trade involving the No. 8 overall pick that happened during the draft itself.

With the Cleveland Browns on the clock at the aforementioned pick No. 8, the Tennessee Titans traded up from pick No. 15, just two spots back from where the Eagles originally were at pick No. 13. Here's what they had to give up:

The eighth-overall pick was also traded in 2013, when the Rams traded with the Bills to move up from pick No. 16 to pick No. 8. Here's what they had to give up:

That move cost the equivalent of a mid-second round pick. Again, what would you rather have -- Maxwell and Alonso, or a 2?

Yes, the Eagles were -3 picks in their deal to move up from 8 to 2, but that was only possible because they got to 8 for almost nothing.

The biggest name among the tryouts is former Notre Dame and Florida State quarterback Everett Golson. Another interesting name is 6'5, 205-pound Angelo State quarterback Kyle Washington, who the Eagles are working out at wide receiver. A highlight reel of Washington:

If Washington gets a training camp invite, he'll be an instant Na Brown Award candidate.

Carson Wentz will be speaking at the podium.