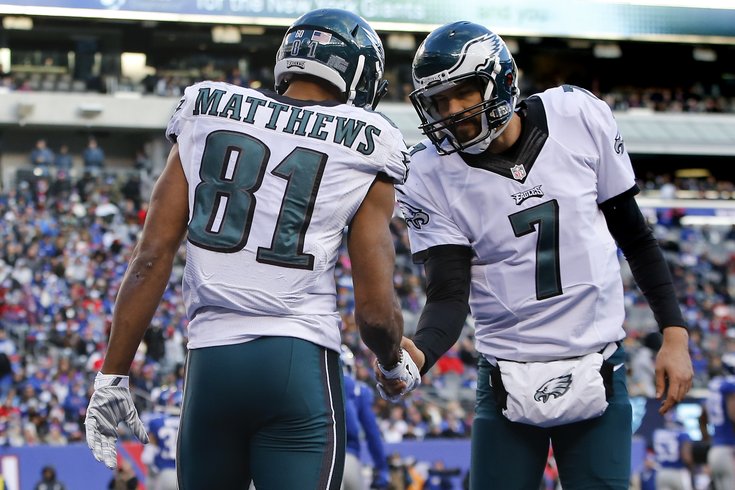 Two days before the 2016 NFL Draft, Tom Condon, the agent for Sam Bradford, appeared on SiriusXM radio and talked for four-plus minutes about the plight of his client in the wake of the Eagles trading up to the No. 2-overall pick, which was to become a quarterback.

The draft came and went, with the Eagles selecting Carson Wentz with the No. 2-overall pick, the Denver Broncos (Bradford's most likely trade partner) selecting Paxton Lynch at 26th overall, and an uninterested Jets team selecting Christian Hackenberg.

It's now almost three weeks later, and Condon is still spewing the same garbage rhetoric, this time on the Rich Eisen podcast, and expanding on it. Let's dissect his words again, because frankly, it's fun.

Condon (on how the team would receive Bradford upon his return): Oh I think it’s fine. When he came back I talked to Howie ahead of time, and said ‘What’s the temperature of the coaches and the team?’ And he said that everybody’s looking forward to trying to get him back, and we’ll welcome him with open arms.

Rebuttal: Nope. It's not fine. Howie Roseman and Doug Pederson may be welcoming Bradford back with "open arms, " as they and now Condon have stated. However, according to a source, there are a number of players who view Bradford differently than they previously have.

Condon (on how the fans will receive Bradford): I think that with regard to the fans, my experience has been both as an agent and a former player, if you’re the nicest guy in the world and you play horribly, the fans hate you. If you play great and you’re fantastic on the field, they love you. So it’s all a matter of performance.

Rebuttal: Sure, I guess that's true to some degree. If Sam Bradford goes out and plays like Aaron Rodgers, the Eagles fan base will forgive him rather quickly. However, when if he doesn't, it's going to get ugly a hell of a lot more quickly and harshly than it would with a player who hasn't acted like a petulant child.

Condon (on whether the Eagles gave them any indication on whether they were going to draft a quarterback): No, but to tell you the truth, I think at that particular time they were trying to acquire a quarterback that they thought they could win with right now because I think they’ve got a good supporting cast and they’ve got a good football team, and Sam certainly fit the bill for that.

Rebuttal: He "fit the bill" in that he was a competent quarterback (if we're calling a guy with 25 career wins in six seasons in the NFL competent) compared to, oh, say, Mark Sanchez, Robert Griffin III, and Brian Hoyer.

Condon (continuing...): When he came out of Oklahoma, after having won the Heisman, he was uncanny with his accuracy.

Rebuttal: Are we really still talking about friggin' Oklahoma? Seriously? That was seven years ago, Uncle Rico.

Rebuttal: Omg, there's so much to rebut here, I don't know where to start. Wait, yes I do. Let's start with his magical last three games.

In the last three games, Bradford put up inflated stats in garbage time blowout losses to the Cardinals and Redskins, followed by a meaningless Week 17 game against the third-worst defense in NFL history. So sure, he put up lofty stats in games he didn't play particularly well (the horribly missed throw to a wiiiiiiide open Zach Ertz remains etched in my brain) that led to the elimination of the Eagles from the playoffs. But stats!

As for "middle of the pack" over the course of the entire season, he was 25th in YPA, and 26th in QB rating. Have I been asleep for 20 years, and the NFL expanded to 50 teams?

As for missing the previous year's offseason program, to begin, that's not even true. Bradford attended every camp, and while he didn't participate in every single aspect of OTAs and minicamp, he did throw, as well as take mental reps. He was a full participant for the entirety of training camp and the preseason. So stop it. When do the nonsense excuses end?

Also, irony. Because you know, Condon is making the "he missed time during the offseason" excuse, like, a day after Bradford ended his three-week strike.

Condon (continuing): And so this year obviously, he would have the opportunity to go through the entire offseason program, learn the new system.

Rebuttal: Or just go into hiding for three weeks.

Condon (continuing...): And with Chase Daniel, of course we didn’t know that Chase Daniel was going to be there at the time, but nevertheless, he already knows the system and played for coach Pederson, so I think that when they made the decision to sign Sam, they thought they were getting somebody that certainly was going to win in the short term. But nevertheless, cognizant of the fact that he’s had some significant injury history.

Rebuttal: How dare the Eagles add a backup who has averaged 11 pass attempts per season over his seven-year career.

Condon (on why Carson Wentz is such a threat): It’s not really a competition. They’re telling you that, 90% of the time, if you’ve traded three picks in ’16, the first round draft choice in ’17, and a second round draft choice in ’18, you don’t do that unless you expect this other guy to play. It’s just a matter of time. The players in the locker room understand that, and let’s face it. Everyone else does too. It’s got to be a mistake and a failure for him not to play.

Rebuttal: Well, sure, that's true, and it shouldn't come as a surprise to a seasoned agent who just signed his below average starting quarterback to a two-year deal with no guarantees in year two.

Condon (continuing...): We looked at it from that point and said, OK, they made a business decision, and from Philadelphia’s standpoint you can look at it and say, ‘OK, Sam’s had a significant injury history, we have to secure the future, so we do that with Carson Wentz.

Rebuttal: Nah, it wasn't because Bradford has a significant injury history. I mean, sure, that may factor in to some degree. It was more about Bradford just not being all that good, and the Eagles trying to find a long-term solution to a quarterback position that has been unstable for over a half-decade.

Condon (on the perception that Bradford was shying away from competition): Come on now, Rich. (Laughs) I mean, really, they made a business decision and we made one too. We thought we had a chance to go to a really good football team and be there for a long time. And that opportunity was there, and the attempt was made. It was just that when the Broncos contacted the Eagles and talked about the trade, they couldn’t agree on the price, and so they drafted somebody in the first round.

Rebuttal: So the only two teams in the league who seem to have any interest at all in Sam Bradford drafted quarterbacks in the first round. That seems relevant.

Condon (continuing...): Now at that point, our options are pretty limited. Our next best option is to go back and prepare for the season.

Rebuttal: The 2016 Philadelphia Eagles, the "NEXT BEST OPTION."

Condon (continuing...): And then we’re back to where you’ve already said, that he goes in, plays great, he’s lights out, and everybody loves him, and either sits Carson for another year or he’s very valuable as a trade commodity.

Rebuttal: Lol, everybody loves him.

Condon (continuing...): He’s a tough guy, and the players in the locker room understand what’s going on, as do the coaches. So that’s what he’s really worried about. As I said, it all gets settled on the field. He either plays really well or he doesn’t. And if he does great as I expect him to, all’s forgotten. And so basically, when you look at it, the Eagles made the business decision and it was good for them. Sam made a business decision that had the opportunity to be good for him and it didn’t work out. And so we take our next best option is to go in there and play good, or play great, and see where we are next year.

Rebuttal: I believe Wharton is offering a new class next semester, "How to throw an ill-conceived temper tantrum and get a major city to despise you, 101."