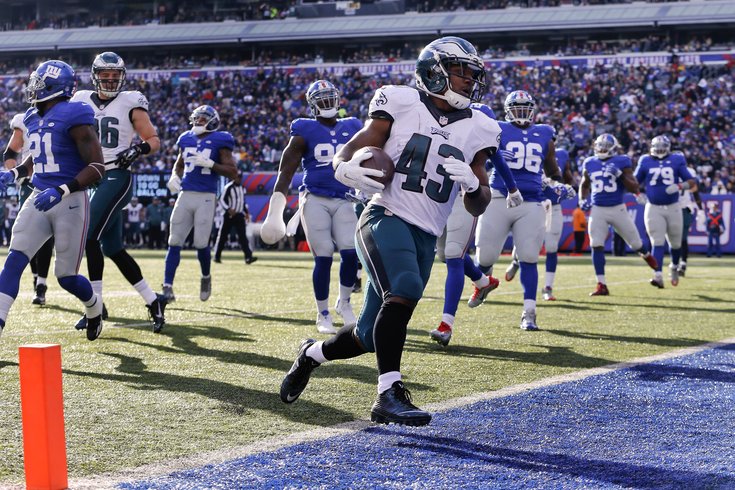 Following the example set by Sam Bradford, Darren Sproles is holding out because the Eagles drafted Wendell Smallwood. Probably.

Back in April, Darren Sproles was one of three Eagles players to miss a voluntary camp, along with LT Jason Peters and DT Fletcher Cox. Sproles' absence was with the Eagles' blessing, as he was training in California and coaching his daughter's track team.

In the Eagles' first post-draft OTAs, Sproles is absent yet again, this time because his name surfaced in trade rumors during the draft, according to Ian Rapoport of NFL Network.

#Eagles received calls of trade interest for RB Darren Sproles mid-draft, sources said. He's staying away from OTAs until its sorted out

"(Sproles) and I are in direct communication," said Doug Pederson. "We have been talking all offseason. I have no issues with Darren. I fully expect him to be here for the mandatory camp, but again, this is a voluntary program so I can't fault him for not being here.

When asked if Sproles is unhappy or if he wants to be traded, Pederson said he did not.

Sproles was among the Eagles' best weapons in 2015 if you include his value on special teams. Whenever opposing teams have been dumb enough to punt to him, Sproles has made them pay. For the second straight year in 2015, he had two punt return touchdowns.

The Eagles might have only won five games instead of seven last season without Sproles. Against the Patriots, Sproles helped put the game out of reach with a punt return TD in a game that was decided by seven points. Ditto that against the Jets. He is a legitimate difference maker who often factors in heavily to the overall results of games with big plays.

Sproles will turn 33 years old in June, and he is in the final year of his contract. He may prefer to play for a serious Super Bowl contender late in his career, while the Eagles may view a trade of Sproles as way to recoup a draft pick for a player who may not be on the roster in 2017 anyway. In those respects, a trade could make sense for both sides.