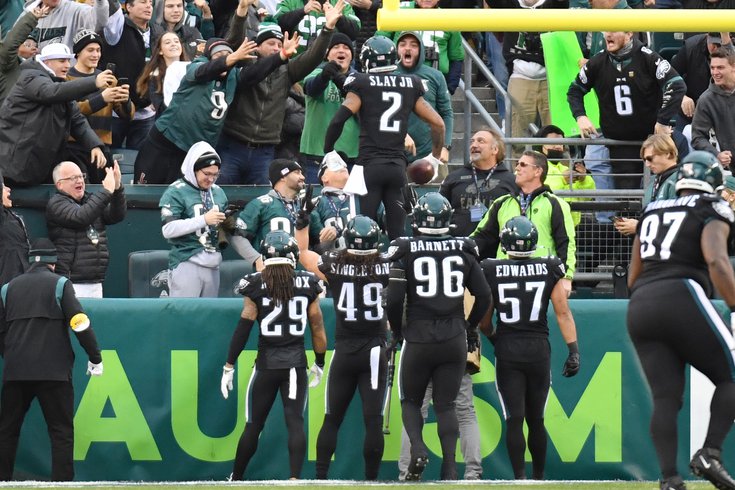 The Eagles are being to get a little love, nationally.

Here's where people around the country have the Eagles ranked heading into Week 12 of the 2021 regular season. Oh, and here's our version of these sellout rankings, too.

The Eagles entered with a 5-5-1 record and with their offense in a rut, having scored 20 points total in their previous two games. It was so bad that coach Andy Reid decided to bench quarterback Donovan McNabb at halftime during a loss to the Ravens the previous week. McNabb bounced back in a big way on Thanksgiving, tossing four touchdowns, while Brian Westbrook racked up 130 total yards and four scores in a Philadelphia romp. The Eagles won four of five to close the regular season, and advanced all the way to the NFC Championship Game ... where they eventually fell to this same Cardinals team.

#JimmySays: My choice for most memorable Thanksgiving game was the year the Eagles got wrecked by the Lions, and Chip Kelly looked like a defeated man while answering some very difficult questions in the postgame press conference.

Jalen Hurts is playing himself into the Eagles' future. The second-year quarterback accounted for three touchdowns on Sunday -- all of them on the ground -- in a 40-29 win over the Saints at the Linc. After the game, Nick Sirianni spoke glowingly of Hurts' multidimensional abilities. "Jalen is a special player who forces defenses to play different," the coach said. The victory was also one of personal significance to Sirianni, who finally has his first win at home in five tries as coach. The Eagles have turned into a great cold-weather team: They run the ball extremely well and beat up the opposition in the trenches. There's more work to be done, but they profile as a player in the NFC wild-card race.

#JimmySays: I know that some folks associate run-heavy attacks with being cold-weather friendly, and I understand the logic, but I'm curious how much of an advantage it really is.

Very good teams are able to throw it in the cold anyway, and a team that struggles in that area as it is might be exponentially one-dimensional in the cold, which is not a good thing.

Anyway, if the Eagles make the playoffs, their first-round matchup will very likely be in Arizona, Tampa, Dallas, Los Angeles, or Green Bay, so the cold would only be a factor in one of those five likely locations.

Despite looking everywhere else but their own roster, it looks like they found a potential franchise quarterback (the guy they spent a second-round pick on 18 months ago, who knew!). Nick Sirianni has put an emphasis on Jalen Hurts’s legs and mobility in the passing game the past few weeks, and DC Jonathan Gannon dialing up the blitz in Sunday’s thumping of the Saints, this team has enough tricks up its sleeve to make a run at a wild-card spot.

#JimmySays: I do think Hurts has to finish strong, but his chances of getting at least another year have certainly risen over the last couple of weeks.

It took them a few weeks to work it all out, but it’s safe to say that the Eagles have found their identity.

After starting the season as a primarily pass-first squad (and not having much success with it), Philly has morphed into one of the league’s most run-centric teams. With the recently returned Miles Sanders leading the way, the Eagles ground game beat up on a good Saints defense in a 40-29 win on Sunday, finishing the day with 242 rushing yards on a whopping 50 (!!) attempts.

Sanders finished with 94 yards on 16 totes, Jordan Howard chipped in 63 yards on 10 carries, and quarterback Jalen Hurts did his thing as both a designed runner and improvisational scrambler, racking up 69 yards and three touchdowns to go with 147 yards passing. Hurts continues to flash each game in his development as a passer, but the team’s transition to an offense designed around his extraordinary skills on the ground has changed the team’s season.

At 5-6, the Eagles remain on the periphery of the NFC playoff race (currently the no. 9 seed, just behind the Niners). But their recent resurgence has put them in a good spot for a late-season flourish. The Eagles’ remaining schedule offers an enticing amount of winnable games, with a matchup with the Jets and two games apiece against the Giants and Washington before they finish up at home against the Cowboys. Don’t be surprised if Philly sneaks into the playoffs as a wild-card team.

#JimmySays: The writer of this originally covered the Seahawks, so if he's wowed by how much the Eagles are running it, that's saying something.

They're now the No. 1 rushing team in NFC (153.4 yards per game) and no longer have a goose egg in the win column at Lincoln Financial Field. Fortunately, their next two are in New Jersey against the lowly Giants and Jets – golden opportunities to vault Philadelphia into wild-card position.

#JimmySays: Maybe they'll just stay in East Rutherford for the week to cut down on travel.

Nick Sirianni's Philadelphia Eagles have figured something out.

After a 2-5 start to the season, the Eagles have now peeled off three wins in four contests to get back to within a game of .500. The recipe for that success has been simple.

Facing the No. 1 defense in rushing yards allowed per game in the New Orleans Saints, the Eagles were absolutely dominant on the ground: 242 yards on a staggering 50 rushes. Given all that banging away on the ground, it should come as no surprise that Philly dominated the tempo of Sunday's game—the Eagles possessed the ball for just over 37 minutes.

While speaking to reporters after the game, running back Miles Sanders (who tallied 94 yards in his first game back from injury) said that dual-threat quarterback Jalen Hurts and a stout offensive line have both contributed to the Eagles' success on the ground.

"It's a big impact," Sanders said. "It opens up big holes for all of us. Having Jalen makes it 10 times easier, but you have to give credit to the offensive line."

#JimmySays: Hey did you guys know the Eagles have run it a lot recently?

The Eagles have taken off, winning three of four (the loss was on a game-ending field goal to the Chargers) since embracing the run game. The stretch has put Jalen Hurts in a position to get at least another season as the Eagles' starter, though he'll still have to play well over the final six games.

#JimmySays: Have to wonder how many more games they might have won earlier this season if they had taken the obvious approach to run the ball a lot from Week 1.

By winning two straight games - only a close loss to the Chargers prevents it from being four straight - the Eagles are in the thick of the division race. Jalen Hurts is playing outstanding football right now.

#JimmySays: Eh, let's see the Cowboys lose on Thanksgiving and the Eagles win on Sunday, and then we can start talking about them being in the thick of the division race. I think they maybe meant wildcard race? Eh, whatever.