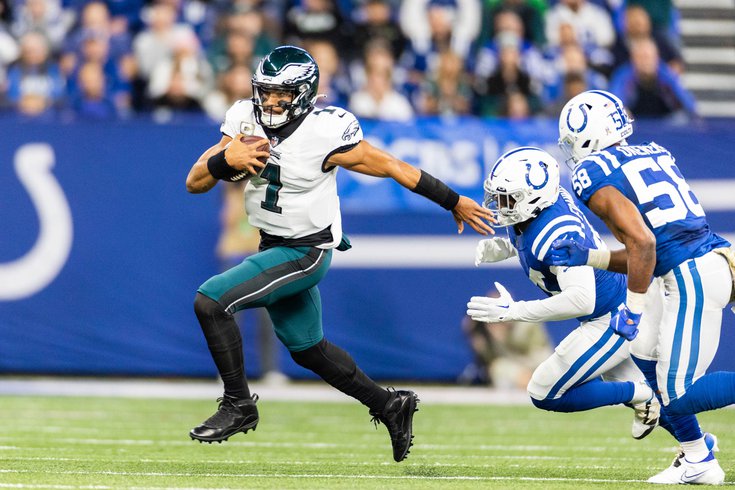 Here's a picture of Jalen Hurts, I guess.

Here's where people have the Birds ranked after Week 11. Oh, and here's our version of these sellout rankings, too.

The Eagles saw their dreams of an undefeated season go up in smoke against the Commanders in Week 10. On Sunday, they were staring down a two-game losing streak -- but the offense came to life just in time. Jalen Hurts led Philly to two fourth-quarter touchdowns, the final score coming on a QB draw with 80 seconds to play to seal a 17-16 victory at Lucas Oil Stadium. The Eagles have won seven straight regular-season road games dating back to last year and now sit a game ahead of the Vikings in the race for the top seed in the NFC. "Lots to clean up, for sure," center Jason Kelce said, acknowledging Philly's sleepy first three quarters. "We played a bad game on offense."

#JimmySays: I had forgotten that the Eagles went 6-3 on the road last year. And, of course they're perfect on the road this year, at 5-0. So that's 11-3 on the road the last two years. #Math. They've been impressive on business trips.

Entering Week 11, the Eagles ranked third on offense, fourth on defense and fourth overall, according to Football Outsiders' defense-adjusted value over average (DVOA) metrics. Everything is top-notch -- with the exception of special teams, which is ranked 22nd. There have been mishaps in almost every game, ranging from roughing the kicker infractions to getting beat on fake punts. It's been a bit of a high-wire act that seems destined to hurt Philadelphia in one of these games.

#JimmySays: How are there 10 teams ranked lower than the Eagles in special teams DVOA?

Thankful for: The moves they didn’t make

At different points this offseason, the Eagles made pitches for Russell Wilson and Deshaun Watson to replace Jalen Hurts as their quarterback. Before trading for A.J. Brown, they looked into Calvin Ridley, Allen Robinson and Christian Kirk. Some combination of luck and discipline led them to where they are now, with the best record in the league after their narrow, uneven win in Indianapolis. And with impressive debuts by Linval Joseph and Ndamukong Suh, the Eagles’ string of successful Plan Bs continues.

#JimmySays: I still can't believe how badly Russ has fallen off. This is an A+ tweet, by the way:

The Eagles simply can’t turn the ball over like they have over the last two weeks if they want to stay atop the NFC and secure the first-round bye. In weeks 1-9, Philadelphia led the league in turnover differential with 18 turnovers forced while committing just three turnovers of their own. In their last two games, they’ve turned the ball over six times and rank 31st in turnover differential (-3). Philly’s early-season turnover luck was ridiculous and bound for regression, but the Eagles will lose more games than they should to close out the season if they let it regress rapidly all at once.

#JimmySays: On Jalen Hurts' fumble, there looked to be some assignment confusion from Jordan Mailata, who blocked down on an interior d-lineman who was already being blocked by Landon Dickerson, leaving Yannick Ngakoue all alone with Miles Sanders. Ngakoue easily beat Sanders, as he should, and he got a blindside shot in on Hurts, who fumbled.

On the Eagles' second fumble, Colts linebacker Zaire Franklin landed a punch square on the football, and A.J. Brown coughed it up. It was a really nice play by Franklin to get the ball out.

Those weren't "luck." The Eagles failed to execute, and the Colts made good plays. Similarly, aside from some rare cases, like Trevor Lawrence just dropping the ball on his own in a rain storm, the Eagles made plays in collecting a high number of turnovers. They were also good with ball security. To call their early turnover success "ridiculous luck" is silly.

Yes, the offense has struggled the past two weeks. But a defense that now ranks second in the league got a nice boost from the recent additions of DTs Linval Joseph and Ndamukong Suh. The veterans combined to share a sack Sunday in their Philly debuts while helping to hold Indianapolis' reputable ground game in check.

#JimmySays: I'll have a breakdown of Joseph's day either today or tomorrow. He was very good.

A.J. Brown had more than 60 yards in six of the Eagles' first seven games. In his last three games, Brown has 59, 7 and 60 yards. The Eagles had a big win on Sunday, coming back in the final minute to win, but they struggled against the Colts. The key to recapturing their form from a few weeks ago is figuring out how to get Brown involved again.

They made it interesting against the Colts, but the sign of a good team is rallying from behind to win on the road. They still have some issues to work out.