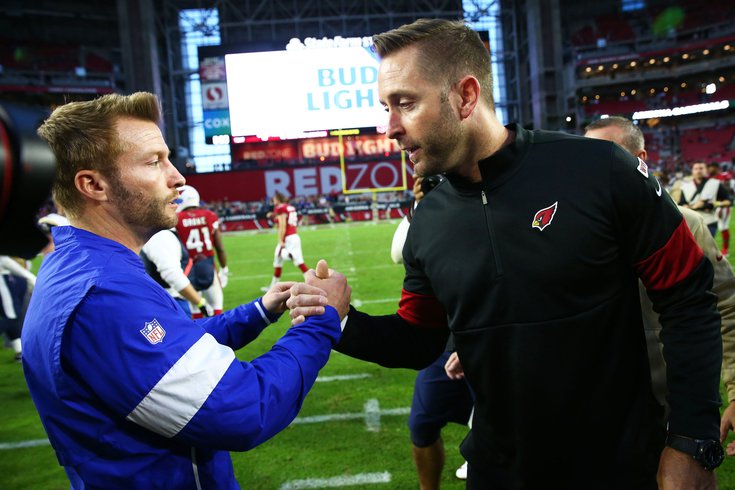 Week 11 of the NFL season is in the books, and the playoff picture in the NFC is beginning to take shape. We have two new NFC West obituaries this week, the Arizona Cardinals and the Los Angeles Rams.

Cardinals (4-7): In 2021, the Cardinals got out to a 7-0 start before losing six of their last 10 regular season games. They were blown out in the wildcard round of the playoffs in a game Kyler Murray refused to finish. In March, the Cardinals extended head coach Kliff Kingsbury and general manager Steve Keim through the 2027 season, and Murray through the 2028 season.

In his nine starts, Murray has averaged a paltry 6.0 yards per attempt, second-worst among NFL starters, behind only Steelers rookie Kenny Pickett. He's also 23rd in QB rating, and he has not yet completed a pass of over 40 yards this season. The only thing he has been really good at in 2022 is throwing his hands up in the air when his teammates make mistakes. Part of the blame for the Cardinals' offensive struggles should also fall on Kingsbury and his unthreatening horizontal offense.

Meanwhile, Keim has assembled the second-oldest roster in the NFL, unwisely going all in on older players when he incorrectly forecasted that he had a Super Bowl-contending team. They had five Week 1 starters who were at least 30 years of age or older:

Add in DeAndre Hopkins (30), who was suspended at the time, and they'd have had six. Hudson and Pugh are on IR, and Ertz soon will be.

The 2022 Cardinals weren't just bad. They were bad, old, and unlikable. Going forward, the Murray/Kingsbury/Keim triumvirate will be the centerpieces of what will very likely be a painful rebuild. There could be some rough years ahead for the Cardinals' eight fans.

But usually, despite no repeat Super Bowl *winners since the 2004 season, teams that win it all are usually still pretty good the following the season. Here's a list of the last 20 Super Bowl winners, and what they did the following season, beginning with the aforementioned 2002 Bucs.

The Rams have been almost shockingly bad in 2022 after winning it all in 2021. Matthew Stafford's arm never looked right from Week 1, the offensive line was wrecked with injuries, and now Cooper Kupp may very well miss the rest of the season. And to think that this team was widely reported to have offered two first-round picks at the trade deadline for Brian Burns. How could they possibly think they had a chance to make a run this season, and even worse, how did the Panthers turn that down?!?

Oh, and they don't have their first-, fourth-, or fifth-round picks in the 2023 NFL Draft. 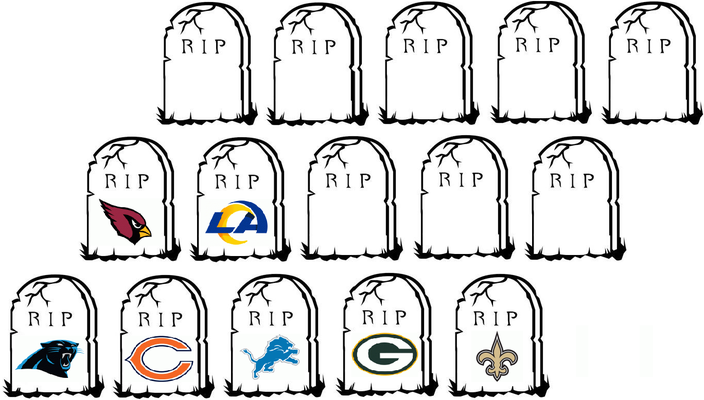 9) Falcons (5-6): Somehow the Falcons outlasted the Packers, Saints, Rams, and Cardinals in the NFC Hierarchy/Obituary this year. Perhaps this is the appropriate place to show the NFC standings, omitting the teams that we have already killed off:

The Falcons are only a half game back in the NFC South, and a game back in the wildcard hunt. FiveThirtyEight.com currently has them as 20 percent likely to make the playoffs. If they beat the Commanders Week 12, they'll double those odds to 40 percent. If they lose, those odds will be (almost) cut in half, to 11 percent. So that's a huge game for them, you know, if the end goal this season is to be easy pickings in the first round of the playoffs and left with the 19th overall pick with little chance of landing a top quarterback prospect.

8) Commanders (6-5): After winning their last two games, the Commanders are in an interesting position to make some noise the rest of this season. Their next four games are as follows:

If you'll note, all four of those games are against teams jockeying for playoff positioning. It's also worth noting that they still have their bye, which is sandwiched in between those two Giants games, and they'll have Chase Young back for their stretch run.

7) Giants (7-3): In addition to getting beaten soundly at home by the Lions, the Giants suffered a bunch of injuries, most notably rookie wide receiver Wan'Dale Robinson, who had 8 catches for 100 yards when he went down with a torn ACL. The Giants' wide receivers have been decimated by injuries (and other) this season. It's been a new loss each month:

• Kadarius Toney: Traded to the Chiefs in October.

They are also very banged up both at cornerback and along their offensive line.

If you look at the Giants' remaining schedule, they only have one game left against a team with a losing record.

I'll call it now: I think the Giants are going to miss the playoffs this season after starting 6-1.

6) Seahawks (6-4): The Seahawks had their bye Week 11, and during their week off there were a lot of discussions about the possibility of a Geno Smith contract extension in the wake of this report from Ian Rapoport:

The #Seahawks want QB Geno Smith back for 2023, with contract talks expected to take place after the season.

Smith is scheduled to be a free agent this offseason. The franchise tag for quarterbacks is projected to be $31,497,000 in 2023, per OverTheCap, which means that any contract extension, barring some sort of late-season collapse, would likely be in the ballpark of $35 million per year, which... 🤯. My bet is that they tag him and leave their options open in the event Smith's surprise 2022 season was a mirage.

5) Buccaneers (5-5): The Bucs had their bye Week 11, and they lost ground in the NFC South to both the Saints and Falcons, who both won. I would rank the NFC's division leaders' chances of winning their respective divisions like so:

4) Cowboys (7-3): The Cowboys wrecked the Vikings on Sunday 40-3 in a game in which they racked up 7 sacks defensively, and scored on eight of 10 possessions on offense. They looked like legitimate Super Bowl contenders. Of course, they also had three games last year in which they smashed an opponent by 4+ scores, only to lose in their subsequent game.

I do think they'll break that trend on Thanksgiving against the Giants.

3) 49ers (6-4): The Niners are outscoring their opponents 54-0 in the second half in their last three games. Physical teams tend to close weaker opponents out, and that's what they're doing. Five of their last seven games are at home, by the way.

The Eagles beat the Vikings 38-7. The Vikings dominated part of the first quarter, but the tide changed following a Patrick Robinson pick-six. The Eagles scored 38 unanswered points, while Nick Foles threw 352 Yards and 3 Touchdowns. SB52 is two weeks away. pic.twitter.com/YjzaPAllCm

It's kind of funny that people overreacted the way they did to that win over the Bills, which, let's be honest, was very lucky.

Well, there will be a new No. 1 team in the power rankings tomorrow morning. pic.twitter.com/kPy2sjRcus

Oops! Anyway, the Vikings are still going to be no worse than the 2 seed, barring a collapse, so I won't be moving them down this week, no matter how bad they looked on Sunday.

1) Eagles (9-1): We've mentioned a number of parallels between the 2022 Eagles and the 2017 Eagles throughout the season. A new one is maybe ugly wins. The 2017 team had some of those, like their Week 15 win over the Giants in which they gave up more than 500 yards. Or maybe the really cold Week 16 Raiders game, where Derek Carr kept making mistakes until the Eagles finally capitalized late.

Winning ugly is fine, for now, but the Birds look a lot more beatable than they did a few weeks ago. Ideally they'll be back to playing at their highest levels again when the games really matter. The 2017 team was able to do that. TBD on this squad.