What they're saying about the Eagles: Back in the win column

Two veteran DTs helped the Eagles' defense lock down Indy, while the team made a comeback that hasn't been seen in well over a decade. 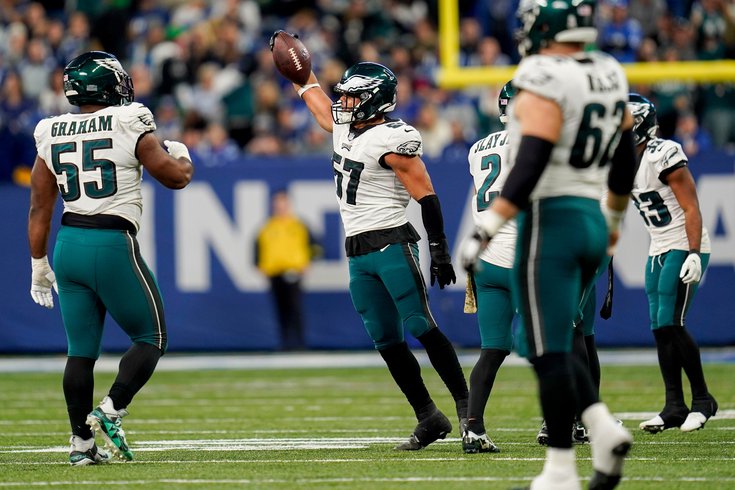 It wasn't pretty, but the Eagles climbed their way back into the win column and improved to 9-1 with a 17-16 victory over the Colts on Sunday.

It took stingy defense, aided by two veteran tackles who had only been in the building for a few days, and two late scoring drives by an offense that didn't get it together until late, but the Eagles found a way again, and now have a little cushion over the NFC East lead after the Giants lost to Detroit.

It's the day after and there's never any shortage of things to talk about when it comes to the Eagles.

So let's take a look at what they're saying as we close the book on Week 11:

After the Thursday night game against the Texans and last Monday's first loss to Washington, in which both teams relied on the run to keep pace or stay ahead, it was pretty clear the Eagles were missing rookie run-stopper Jordan Davis badly but weren't content to sit and wait until he could make it back.

GM Howie Roseman looked into the free agent pool and brought in veteran DTs Linval Joseph and Ndamukong Suh, both in their mid-30s, just days before the Colts game, and yet both of them settled in right away.

Neither Linval Joseph, 34, nor Ndamukong Suh, 35, had played a snap this season before Roseman signed them last week — Joseph on Wednesday, Suh on Thursday. But the two of them looked 10 years younger Sunday, combining for seven tackles and splitting a sack of Matt Ryan, helping to keep the Colts out of the end zone after an opening-drive touchdown.

Graham, 34, got in on the Cocoon sequel, too, bull-rushing left tackle Bernhard Raimann to sack Ryan for a 7-yard loss on the Colts’ final, fruitless possession. Yet it was Joseph and Suh, acquired to fill in for injured rookie Jordan Davis and provide depth at tackle, who were the keys to fixing what had most ailed this defense lately. In the Eagles’ two previous games, the Houston Texans and Washington Commanders had pushed them around at the line of scrimmage, had run the ball pretty much at will against them. After carrying seven times for 49 yards on Indianapolis’ first possession, though, Jonathan Taylor managed just 39 yards on 15 carries the rest of the game, and for at least this week, and maybe for longer, Jonathan Gannon’s unit was stouter and stronger because of Joseph and Suh.

“I’ve been telling people: Age is just a number,” Joseph said. “Coming off the couch, two surgeries, nobody wanted to give me a chance. They gave me a chance, and I want to go out there and show the world I’ve still got it — doesn’t matter how old I am.” [The Inquirer]

Lock it back down

Speaking of the defense, they kept the Colts pretty locked down after their opening touchdown drive. It was a huge rebound game for a lot of Eagles defenders after that frustrating loss to Washington.

Major props to the defense for pretty much shutting down the Colts after that initial 75-yard touchdown drive to open the game. They allowed just three field goals the rest of the way and here’s the Colts’ drives by yards after the TD: 9, 11, 16, 22, 5, minus-4, 23, 32, 47, 8. Coming off Washington, this was a heck of performance. Especially on Jonathan Taylor. He’s one of the most dangerous backs in the league, and he looked like it on the Colts’ first drive, running 7 times for 49 yards. That’s 7.0 yards per pop. After that, he ran 15 times for just 35 yards, which is 2.3 yards per carry. T.J. Edwards was all over the field making big plays, Darius Slay rebounded after a bad game last week and slow start Sunday, Haason Reddick and Brandon Graham had huge late sacks, and Jonathan Gannon got his guys to settle down enough to play some very good football after that sluggish start. Big-time performance by the defense. [NBCSP]

Moreover, the defense's play allowed the offense to climb out of a 10-point hole then win it late going into the fourth quarter, something no Eagles team has done in well over a decade.

This team doesn’t just talk about overcoming adversity, man, they live it. Down 10 points in the fourth quarter, coming off a bad home loss, short week, on the road, against a rejuvenated team? The Eagles were spectacular in the fourth quarter Sunday, turning a 13-3 deficit into a 17-16 win, and it was magnificent. The Eagles had lost 41 straight games trailing by 10 or more going into the fourth quarter since that unforgettable 38-31 win over the Giants at the Meadowlands in 2010 – the DeSean Jackson last-second punt return touchdown. There was a lot working against them Sunday – injuries, turnovers, big deficit - but they found a way and somehow they find themselves 9-1 with seven games to go. This is the team we thought they were. They just waited 45 minutes to start showing it. [NBCSP]

And since he mentioned it, click HERE to watch that winning punt return all those years ago. (Again, no YouTube embeds to just watch it here because the NFL's digital media policy makes zero sense.)

About that PI call

Miles Sanders took off on a route downfield and Colts linebacker Zaire Franklin was caught.

Hurts sent the pass Sanders' way but underthrew it and Franklin never turned around to look for the ball. So when the Eagles running back turned back to position himself for the catch, Franklin just straight-up tackled him way before the ball even came anywhere close.

It was an extremely obvious, and baffling, defensive pass interference call, one that moved the Eagles 39 yards up and allowed them to chip away at the remaining yardage, chew up clock, then eventually score the deciding touchdown.

So what was the logic there?

The Indy Star's Joel A. Erickson got the explanation from Franklin:

If Zaire Franklin could do it over again, knowing everything he knows now, he would have turned to look for the ball.

Franklin has been so good for the Colts this season, but he’d been beaten deep by Eagles running back Miles Sanders on a key third down to start Philadelphia’s final drive in a 17-16 Colts loss.

As he tried to chase Sanders down, all Franklin was trying to do was prevent the touchdown.

“I saw his eyes getting big, so I knew the ball was coming,” Franklin said. “I was just thinking: Go. Try to make a play on the ball. Best-case scenario, I break it up. Worst-case scenario, if it’s a flag, it’s not a touchdown, and we’ll just be able to line up and play. I love us in the red zone.” [Indy Star]

Is it a "no duh" statement? Yeah, but that's because it so often rings painfully true. In the NFL, things can change in an instant. The Eagles got off to a franchise-best 8-0 start and looked untouchable, then they lost to Washington and everyone saw the blueprint on how to beat them. In some corners of football and Philly sports talk, the sky was falling.

And it's not like amazing starts haven't gone completely south before. It happened to the '81 Eagles, the '94 Eagles too, and the 2014 squad – because you know Chip Kelly is a name Eagles fans never want to hear get brought up.

The 2022 Eagles could've begun facing the prospect of collapse too, they looked like they were going to for three quarters against Indy on Sunday. Instead, they adapted and pulled through.

The 1994 and 2014 Eagles deserved to collapse. (The 1981 Eagles were Boogie Nights characters.) They were average-at-best teams with suspect coaches who caught some early opponents off guard. The same might have been said of the 2022 Eagles at the start of the fourth quarter on Sunday. Maybe the option-and-RPO offense was no longer fooling anyone. Maybe adding 30-something-year-old Pro Bowl defensive tackles from the mid-2010s was a sign of desperation. Maybe the Eagles were just a soft-schedule mirage.

Heck, maybe those things are still true. But at the final gun, the Eagles looked like a team that had solved its biggest problem, overcame its greatest weakness, and was ready for opponents like the Giants and Titans to try their darndest to beat them with nothing but inside zone.

Eagles fans who recite the Mantra of Collapse can also remember 2017, the year the team started 11-2 but their starting quarterback got injured. We all remember how that season ended. Some temporary setbacks are really opportunities. Not all flaws are fatal. And the epic downfall of the 2022 Eagles has been canceled until further notice. [Football Outsiders]