Back to basics: Eagles rediscover strength in the run on winning drive against Colts

With help from a big pass interference call 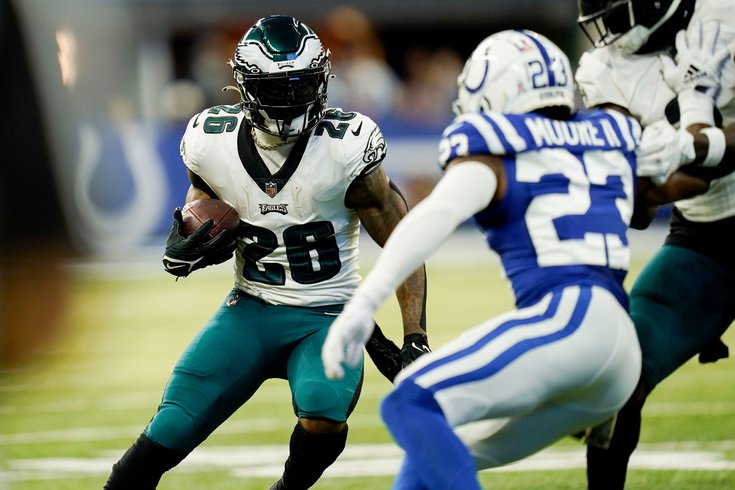 Eagles RB Miles Sanders looks for an opening after the handoff during Sunday's game against the Colts in Indianapolis.

The run game saved last year and has been the reason the Eagles won plenty of games this year.

But until the very end on Sunday in Indianapolis, they shied away from establishing a steady rushing attack and almost seemingly refused to do so at points during the Week 11 game. Then they took the ball on their final drive and got back to the tried and true.

The Eagles beat the Colts, 17-16, on Sunday to bounce back from last week's loss against the Commanders when they were all kinds of out of sorts.

And the truth is, the offense still looked it for the better part of the game against Indy. But in the end, they did find a way.

Even through all the miscues– like Jason Kelce's high snap and A.J. Brown's late fumble – and some head-scratching play calls that maybe should've cost them their second straight – having Miles Sanders block Hurts' blindside from Colts defensive end Yannick Ngakoue to open the half was definitely an odd one, to say the least – they found a way. The defense held Indy to just field goals and the offense figured something out at the last minute.

Before the game-winning drive, Sanders had only 10 carries for 34 yards, Kenny Gainwell ran once for no gain, and Jalen Hurts led the Eagles in rushing with 12 carries for 80 yards, but that was mostly from scrambles on long developing plays that never produced an open man and forced him to make a break for it.

To that point, the Eagles' running backs were handed the ball just 11 times and averaged only 3.4 yards a carry.

Between most of Sunday and last Monday's first loss to Washington, the Eagles, now at 9-1, had suddenly reverted back to the bad habits from early last season when they looked dead in the water at 2-5 and had fans screaming at them to run the football.

The Eagles took the ball with 4:37 remaining down 16-10, and with help from a mismatch that drew a huge 39-yard pass interference penalty because of Sanders running a go-route downfield, the offense buckled in.

"We got to what we felt was working at the time," head coach Nick Sirianni said of trying to simplify things in the second half. "It still wasn't easy as you guys saw... Good job by [offensive coordinator Shane Steichen] calling it in the second half, [offensive line coach Jeff Stoutland] making some adjustments, all the guys making adjustments, and the defense allowed us time to be able to do that."

The rest of the plays were all runs, Sanders for a few yards here, Boston Scott for a couple yards there. The approach was chewing clock – taking it well past the two-minute warning – slowly nudging the Eagles forward, and underneath it all, conditioning the Colts' defenders to follow the blockers.

So on 3rd and goal from Indy's 7-yard line, when the ball was snapped and Jason Kelce shifted way right, everyone in blue went his way to chase after the ball they thought was going to be behind him. Instead, the entire middle of the field opened up for Hurts and all he had to do was walk it in to set the Eagles up for the lead after the extra point.

"That was a big-time drive," Sirianni said.

JALEN HURTS. @Eagles take their first lead of the game!

The final lines for the day: Hurts with 16 carries for 86 yards and a touchdown, Sanders with 13 carries for 47 yards, Scott with 3 for 8, and Gainwell with one for none.

That the Eagles aren't really utilizing their running backs on the ground right now is something to keep an eye on going forward. They only had 66 combined yards rushing last week against Washington too, and maybe that problem wasn't as glaring because teams always had a three-headed monster in Brown, DeVonta Smith, and Dallas Goedert to worry about through the air.

But Goedert's going to be out a while and a big reason why the Eagles developed into a playoff team last season and are at the top of the NFC East right now is that they had an offensive line and runners that combined to create 2021's best rushing attack, one that returned completely intact this year, has stayed relatively healthy and has kept the offense running as smoothly as it has up until a couple of weeks ago.

The Eagles found a way on Sunday, but only after getting away from what had proven to work so well already before they could.