Three pivotal plays from the Eagles' win over the Colts 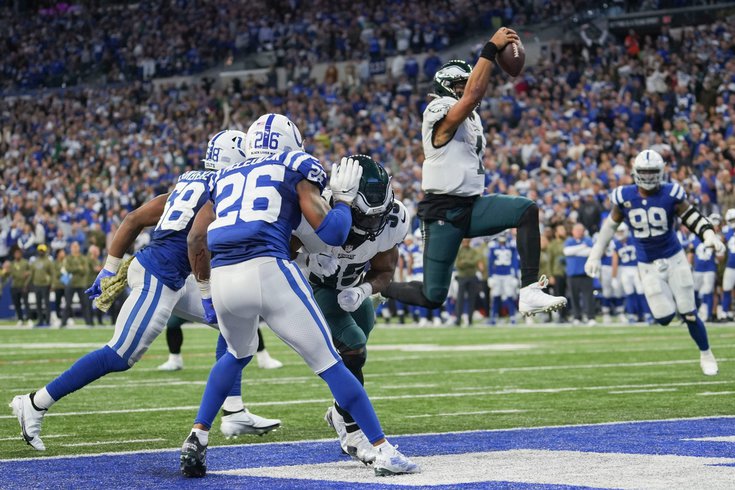 Eagles quarterback Jalen Hurts rushes for the game-winning touchdown over the Colts.

The Eagles got punched in the mouth on Monday Night Football this past week, as the Commanders delivered the Birds' first loss of the season. The Colts continued bruising them for three-quarters-and-change on Sunday, but the Eagles composed themselves from a near-disastrous day and pulled a win out of their asses, taking down Indianapolis 17-16.

They won a game they never should've won and almost every non-2017 Eagles squad in my lifetime would've come up short in. I don't get it. They shouldn't have, but they did. Props to defensive coordinator Jonathan Gannon holding down the fort and allowing just 16 points. Props to QB1, Jalen Hurts, for making the high-leverage runs he was born to make after a shaky day that's uncharacteristic for his 2022 self.

The Eagles are 9-1 for the first time since 2017. The three pivotal play story I originally pre-wrote about the Colts' win will never see the light of day (probably would've won a Pulitzer), but this one will be much more of a happy read for Eagles fans:

There are three "special" running quarterbacks in NFL history. Two of them played for the Birds. Randall Cunningham laid the blueprint and Michael Vick helped revolutionize the position. Lamar Jackson later ran his way to an MVP award. Hurts isn't quite at their level in terms of pure dynamism, but he's smart, strong as hell and knows when to hold that R2 button for a speed burst.

Hurts' 23-yard dash earlier in the fourth quarter changed the complexion of this game, giving the Birds a pulse that had been sorrily missing:

At times in his career, Hurts has been criticized for looking to run too quickly. That wasn't the case here. The first reads were not there. He danced around a bit, but kept his head up. When things completely broke down, he tucked the ball, evaded Colts defenders and broke a tackle to give the Eagles a first down they so desperately needed.

If not for Hurts' heroics with his legs, the Birds don't score their first touchdown of the afternoon and are flying back to Philly with back-to-back losses to their name.

Beating opponents with a QB-focused rushing attack isn't the most sustainable offensive strategy, but Hurts has illustrated enough during the first two months of this season that he's rapidly improved as a passer and has a killer ace in the hole.

Referees were the most-hated group of people in Philadelphia on Monday (and most Sundays, really), but a flag for defensive pass interference on Colts linebacker Zaire Franklin (a Philly native and La Salle College High School grad!) resulted in 39 yards of field position for the Eagles:

The most obvious pass interference call of all time 😂 pic.twitter.com/WoNysZfWHM

It was obviously the right call from the officials. Franklin tackled Miles Sanders!

I liked the decision to air it out from Hurts here. I'm always going to be pro-attacking down the field. I will say, however, this throw was certainly underthrown, necessitating Sanders to pull up before Franklin clobbered him. Sometimes it's better to be lucky than good. I had a buddy in college who, when faced with any single pressing life decision, would calmly say, "It'll work itself out." That's burned into my brain. It worked itself out on that one.

After drawing that DPI, Sanders followed this play up with two rushes to get the Eagles into the red zone, setting up a confusing sequence of coaching events from and an eventual game-winning score.

This red zone experience was a series of head-scratchers and odds decisions from the Eagles' coaching nucleus. What in the world is this:

Most important drive of the season, and 3 consecutive handoffs to Boston Scott in the RZ? I don't get it.

To quote a 25-year-old film franchise that makes me feel like ancient, it's as if head coach Nick Sirianni and offensive coordinator Shane Steichen lost their mojo. There were blunders. They mismanaged timeouts and the two-minute situation. Perhaps QB1's game-winning seven-yard touchdown run ignites a spark for the staff as the team's schedule gets increasingly hard:

JALEN HURTS. @Eagles take their first lead of the game!

The fact Hurts squatted 600 pounds in college has become a meme among Eagles fans. With clear space in front of him, the strongest QB in the NFL took off and found pay dirt. Game.

I saw some people on Twitter saying that Hurts should've gone down at the one-yard line to burn some more clock. I don't know about that. I get the rationale, but a touchdown is a touchdown and a missed QB sneak on fourth and goal after Hurts took a knee at the one would've had the city in flames. For the sake of everyone, it was a good move from Hurts to, ya know, get in the end zone.

For the first time ever I'm doing a a quick honorable mention. After the Colts got the ball back following that Hurts TD run, they had a shot to get into field goal position for a go-ahead field goal. With Indy facing a 3rd and 9 from their own 40, Super Bowl hero Brandon Graham sacked Colts quarterback Matt Ryan for a seven-yard loss. An ensuing false start gave the Colts a 4th and 21 they didn't come close to converting. Freddie Mitchell isn't walking through that door for a fourth down miracle, Matty Ice!

A classic bullrush from the 13-year vet:

Brandon Graham goes speed to power & uses great strength, leverage & leg drive to walk his blocker back into the QB & get the sack. Assist to Javon Hargrave for bull rushing Quenton Nelson into Matt Ryan as well! #passrush #flyeaglesfly pic.twitter.com/mrmqsWJbOa

I'll be delivering the next set of pivotal plays after the Eagles' Sunday Night Football matchup with Aaron Rodgers and the Packers next Sunday. Make sure to get a late afternoon cup of coffee so you can stay up and read that after the game.