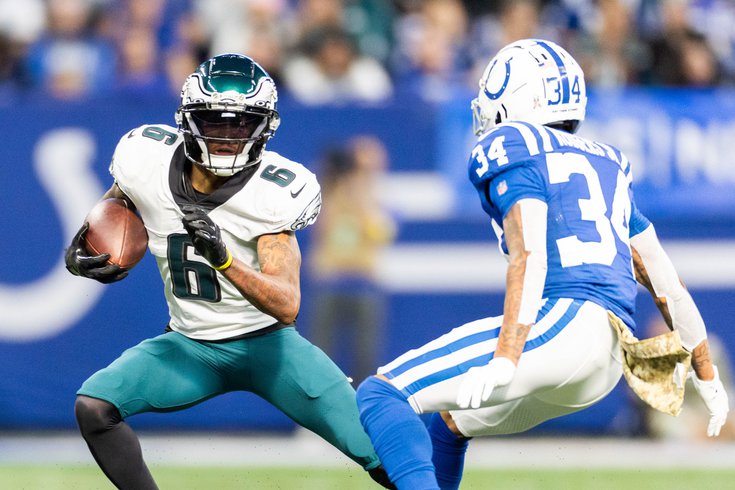 Eagles WR DeVonta Smith runs after the catch with Colts cornerback Isaiah Rodgers covering during the first half of Sunday's game in Indianapolis.

The Eagles looked pretty bad, but still found a way to win Sunday in Indianapolis, and in doing so they expanded their lead in the NFC East and have a little breathing room as the calendar approaches December.

At 9-1, the Eagles have the best record in football and thanks to a loss by the Giants to the Lions in Week 11, they have a two-game lead.

The Cowboys are back by two games back now alongside New York after crushing the Vikings, who now are trailing the Eagles for the No. 1 seed in the NFC.

Winning the NFC East is the goal for the Eagles, but with just one bye week available in each conference this season, they need to keep their foot on the throttle going forward.

The Birds have three divisional games remaining and they could very well determine both the division winner and the team that gets that valuable first-round playoff bye.

It's pretty clear that the NFC East is the best division in the NFL and though the Eagles do have weaknesses and have beaten some bad teams this season, prevailing in this juggernaut quartet of teams could battle test them for a deep playoff run.

If things stay this close in the standings, it could be anyone's division a few weeks from now. The Eagles' schedule overall has a few hurdles ahead aside from their division rivals, with the Packers coming to town next Sunday night and the Titans a week after that.

Buckle up. It's going to be a stressful winter.