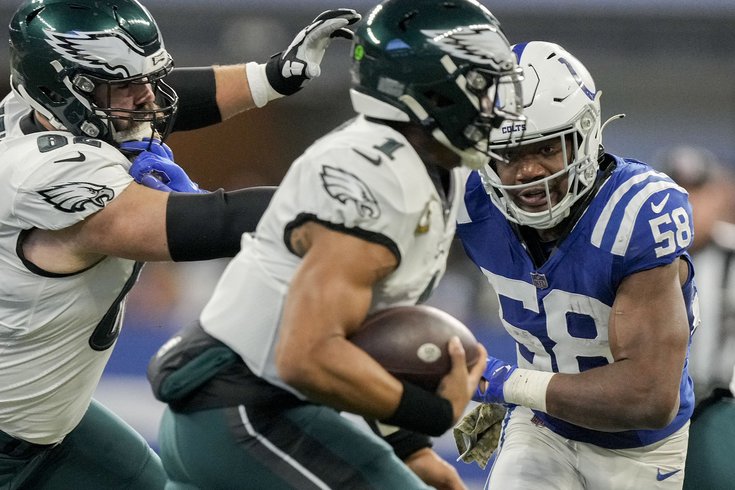 Eagles QB Jalen Hurts scrambles with Colts LB Bobby Okereke in pursuit during the first half of Sunday's game in Indianapolis.

The Philadelphia Eagles will try to bounce back from their Week 10 loss to the Washington Commanders as they'll take on Indianapolis Colts at Lucas Oil Stadium.

The Eagles had good luck on the injury front through the first half of the season, but the injury bug has bitten them of late, as a number of important players have landed on injured reserve. The Colts listed 12 players on their initial injury report this week, and their best defensive player is on injured reserve. You can find the full Eagles-Colts injury report here.

As we noted in our five matchups to watch, while the Colts have been a hot mess off the field this season, it's still a team with its share of talented players. The Colts will likely try to run it early and often, just as the Texans and Commanders have done against the Eagles in each of their last two games. The Eagles will have to find a way to stop star Colts RB Jonathan Taylor. Will Jonathan Gannon have answers?

The Eagles are 6.5-point road favorites. Here are our staff writer picks as well as who some others around the country are picking.