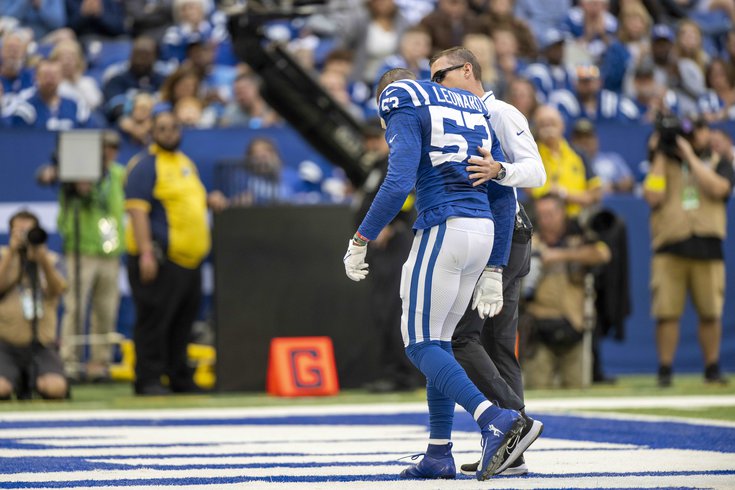 Colts star LB Shaquille Leonard is done for the season.

The Philadelphia Eagles have been a relatively healthy team for the better part of this season, but they have begun accumulating a bunch notable injuries over the last few weeks. Their Week 11 opponent, the Indianapolis Colts, have nine players listed on their initial injury report, and their best defensive player is on injured reserve.

• A bunch of the Eagles' best players showed up on the injury report this week, but the only non-participant was deep backup Josh Jobe. Obviously, we'll monitor the progression of the Eagles' very good players as the week progresses, but for now their availability probably isn't a big concern.

• Quinn was added to the report, and he did not practice. There was no change in participation from the other Eagles players on the list, though it's likely the team is giving them added rest on a short week.

• Everyone is good to go, except Jobe.

• TE Dallas Goedert (IR - Week 11): Goedert has 43 receptions for 533 yards and 3 TDs, and has been one of the most efficient pass catchers in the NFL the last two seasons, in addition to his above average blocking skills. He is a top five type of tight end with no obvious flaws in his game who rarely comes off the field. Goedert will have to be replaced by a combination of Jack Stoll, Grant Calcaterra, and Tyree Jackson, who was activated off of the PUP list on Wednesday.

Against the Steelers, he started seeing more action in even-man fronts, aligning as a three-technique. With Davis out, the Eagles will likely have to play Fletcher Cox and Javon Hargrave more than they'd prefer, and they may have to commit more bodies toward stopping the run.

• CB Avonte Maddox (IR - Week 10): Maddox is the Eagles' starting slot corner. He was replaced in the lineup by Josiah Scott, who gave up a few third down completions against the Commanders in the Eagles' loss on Monday night.

• The Colts' defensive line is banged up, as three starters appear on the initial injury report. Two of them — DT DeForest Buckner and DE Kwity Paye — didn't practice at all. Buckner (5.5 sacks), Ngakoue (5 sacks), and Paye (4 sacks) account for 14.5 of the team's 25 sacks.

• Buckner was a full participant after missed practice on Wednesday. He'll almost certainly play on Sunday.

• The statuses of Moore and Paye are worth watching as non-participants in each of the first two practices.

• Paye is the most notable player who will be out on Sunday.

• Braden Smith unexpectedly popped up on the injury report on Friday. If he can't go, we might see one of two former Eagles — Matt Pryor or Dennis Kelly — starting at RT.

• P Rigoberto Sanchez (Season-ending IR): Sanchez tore an Achilles during the offseason. The Colts signed Matt Haack to replace him.