Eagles injury update: TE Dallas Goedert will return later this season, DT Jordan Davis could be back vs. Titans

Goedert is reportedly expected to return in the home stretch of the regular season while Davis could be activated Week 13 against Tennessee. 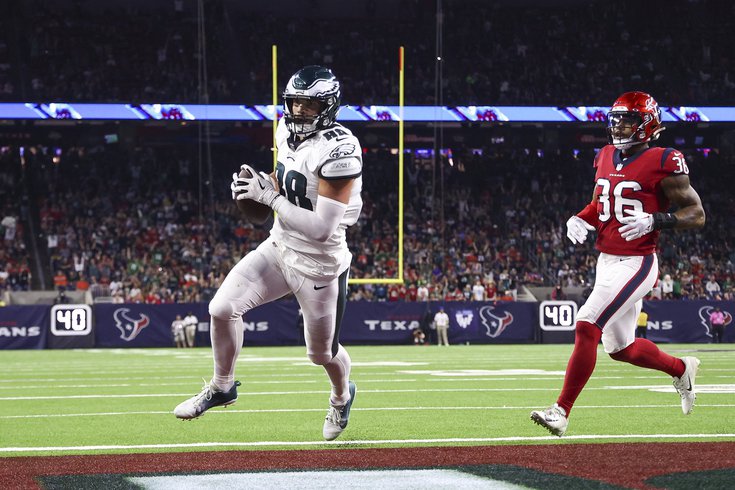 Dallas Goedert, on injured reserve with a shoulder injury, will return this season.

The Eagles have to go without top tight end Dallas Goedert and rookie defensive tackle Jordan Davis, but the good news is that both should be back later this season.

Per ESPN's Adam Schefter, Goedert is expected to return for the home stretch of the regular season schedule, the "only question is whether it's with two, three or four games left," he quoted a source.

Davis, meanwhile, who the Eagles have missed as a big run-stopping presence on the inside, reportedly has a shot to be activated for the Week 13 home game against Tennessee on Dec. 4.

Eagles TE Dallas Goedert, placed on IR this past week with a shoulder injury, is expected to return during the regular season.

Eagles also believe DT Jordan Davis has a chance to return when he is eligible to come off IR on Dec. 4 against the Titans.https://t.co/TT2bn2C2eL

Goedert suffered a shoulder injury late in last Monday night's loss to the Commanders after he was pulled to the ground by Washington linebacker Jamin Davis on a missed facemask call with defensive tackle John Ridgeway also coming down on him from behind. Goedert fumbled on the play and was slow to get up after.

Davis, the Eagles' 2022 first-round pick out of Georgia, suffered a high-ankle sprain during the team's Week 8 matchup against the Steelers on Oct. 30. He was initially helped off the field, but after going to the medical tent on the sideline, he needed to be carted back to the locker room.

Goedert, with 43 receptions on the year, is second on the team in receiving yards with 544, and his three touchdowns are also tied for second with wide receiver DeVonta Smith. The reported target of 2-4 games left in the regular season would put his return between Week 15 at Chicago on December 18 at the earliest and Week 17 vs. New Orleans on New Year's Day at the latest.

Davis, who has so far played a limited role in his rookie season, has just 14 total tackles through seven games but helped limit opposing offenses' rushing attack through the middle. Since he's been out, both the Houston Texans with Dameon Pierce and Washington with Brian Robinson Jr. have used the run to their advantage, which led the Eagles to sign veteran defensive tackles Linval Joseph and Ndamukong Suh as a way to plug the leak, especially with a slew of top running backs coming up on the schedule.