Mailbag: Projecting the Eagles' (and Saints') win-loss records the rest of the 2022 season 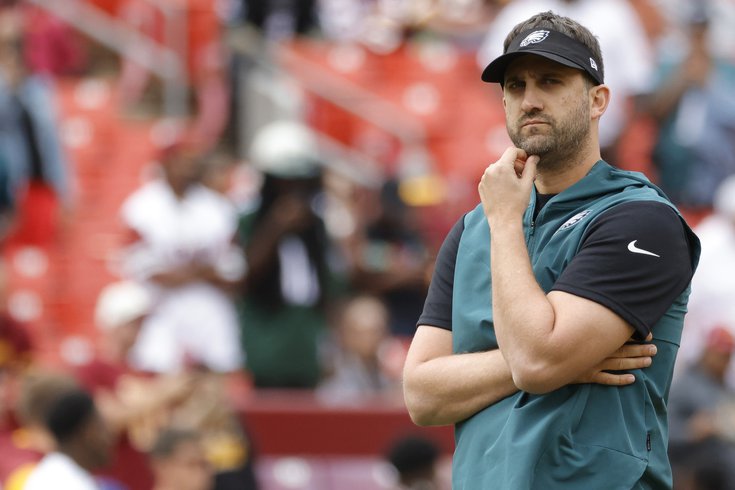 Question from greenwithenvy: What's your win-lost prediction for the Eagles last 8 games of the season?

• At Colts: Win. I mean, they better win, or there will be city-wide panic.

• Packers: Win. Aaron Rodgers looked horrible on Thursday night against the Titans, and he has played that way for most of the season.

• Titans: Loss. This is a grimy, physical, run-heavy team that matches up well against the Eagles.

• At Giants: Win. I think there's some potential for Saquon Barkley's play to fall off some down the stretch, as he has been wildly overused by the Giants.

• At Bears: Win. Justin Fields makes plays, but their defense is very bad.

• At Cowboys: Loss. This is a game that is (a) on short rest, and (b) the third of a three-game road stretch. Those two things combine for a pretty significant Cowboys avantage.

• Saints: Win. The Saints are going to be thinking about getting away to Cabo.

• Giants: Win. I think the Eagles will need this game to secure seeding in the NFC playoffs.

Question from mind on the draft: How likely is it that the Saints can stay around the top 5? How do you see their record playing out? Can the Rams piece something together and keep my hopes of a top 3-5 pick alive?

Alright, let's do the Saints too, I guess, without commentary:

Question from Andrew: Not excusing Gannon here, but it does seem like the particular defensive injuries to Jordan Davis and Avonte Maddox conspire to make a run for 3, run for 4, short pass to slot receiver for 1st down offense more sustainable.

Yeah, there's some logic in that. and I think that at least the Davis part of that equation is why they signed Linval Joseph and Ndamukong Suh, in addition to being able to give Fletcher Cox and Javon Hargrave more breathers in the short term.

Question from QB Factory Worker: Can you give a breakdown of the Arryn Siposs double clutch punt? It looked like the awesomeness of that move and then the penalty overshadowed another horrible special teams breakdown. How did someone get free right up the gut?

Here it is from the end zone view:

The pressure came from the edge, not up the gut. As you can see, neither Nakobe Dean (17) nor K'Von Wallace (42) picked up Khaleke Hudson (47). Hudson didn't even look like he was in punt block mode, but when nobody blocked him he was like, "Oh... word? You're not blocking me? I guess I'll try to block the punt then."

I don't know if the Eagles had an out of the ordinary punt call on given their desperate situation at that point in the game that would explain why they didn't block that guy, but we didn't get to talk to Michael Clay this week.

I did want to bring something up on the ensuing second punt after the Eagles were flagged for an illegal man down the field on the first punt shown above. There was 2:08 left on the clock. Had the Eagles punted it out of bounds they would have had a decent enough chance of the having the clock stop at, say, 2:01. The clock would have stopped at the two-minute warning after the Commanders' first play on their ensuing possession, which would have saved the Eagles a timeout. Instead, Siposs just booted it right down the middle of the field.

Question from Jordan: What is up with the coaches refusing to run the ball in the 1st half most games? The running game is the bread and butter and they always turn to it when things get tough, so why not have a better balance from the start of the games?

The Eagles are scoring 19.4 points per game in the first half of games, best in the NFL.

Question from Norm Snead: Is it common for edge rushers to fall off a cliff? Looks like Robert Quinn is going to be more Ryan Kerrigan than Chris Long?

Sure, it's common for players at any position to fall off a cliff.

I do think there are some built-in excuses for Quinn after his first three games:

On Sunday, as we noted in our five matchups to watch, the Colts are starting Bernhard Raimann at LT. Raimann has not logged many hours over his life as an offensive lineman, so that is a matchup that an old, wily vet should be able to take advantage of. If the Eagles get the Colts into long downs and distances and Quinn fails to produce against Raimann, then that will be a really bad sign for the value of that trade.

Question from DB: They brought up a CB and not a DT for Monday's game. Did they think the Commanders' gameplan was going to be pass-oriented? Seems like a big risk to go light on the DL.

They had two cornerbacks out in Avonte Maddox and Josh Jobe, so elevating a corner certainly made sense. Could they have elevated Marvin Wilson and had some other player inactive? I guess, but I don't think that would have changed the outcome of the game, and the Eagles probably didn't foresee the Commanders completely controlling time of possession the way that they did.

Question from 15% off meat snacks with code BGN15: Is Driscoll RG1 next year with Seumalo entering free agency and turning 30?

I think there are a lot of different directions they could go. To begin, I wouldn't rule out bringing Seumalo back. I could also see them drafting a tackle relatively high to eventually replace Lane Johnson if they think that player can start at guard in the short term. And sure, if Seumalo walks and they don't address the position with an immediate starter in the draft, then Driscoll could be a cromulent starter.

Question from Kephas: Was that the worst end-of-game "Laterals Forever" play you've seen? I mean, nobody is expecting it to work, but I think they only got two touches.

I've never understood why offenses don't line up four skill position players on the offensive line, along with the regular center. Put 10 guys on the field who are actually a threat to run with the ball. My personnel for a lateral play would be as follows:

Like, what is Landon Dickerson going to do if he has to catch a lateral?

Question from Sporran: Did the Eagles' loss hurt your traffic numbers?

They were way down this week. The "10 awards" were hit the hardest, as always after losses.

So, as mentioned on Twitter, my top three are:

1) Ndamukong Suh: Google "Dirtiest players in the NFL," and he will make every list. Plus, he's huge and kinda strong.

2) Derek Barnett: Many would argue Jordan Mailata or Jordan Davis here, but those guys are too nice. I would like to make it clear that every player on the roster would absolutely destroy me in a fight, whether it's Suh or Britain Covey. My biggest fear would be a player who would take enjoyment out of kicking my ass, and that would be Barnett, who is the favorite every training camp to be involved in a fight.

3) Landon Dickerson: If Dickerson thinks he can take someone's soul during a game, he will, like he did to poor No. 95 of the Jaguars Week 3:

Landon Dickerson was dominant against the Jaguars and bullied 95. Can't say that much in the NFL, but that's what this was. pic.twitter.com/xec8hstrxn

I feel like Dickerson would be like, "Oh, you're 45 and sometimes it hurts just to get out of bed? Welp, shouldn't have gotten in the ring then," before he proceeded to destroy me.

As for who I would pick to fight if I absolutely had to, I'd go with Britain Covey (small, and religious), Jake Elliott (the kicker is always an obvious choice, even if Jake is super athletic), and Gardner Minshew. I might also consider Josh Sweat, in that I'd try to kick his knee, though that would go very badly if I missed.

Question from Road Tripper: Lord Jimmy, our annual Eagles road trip this season is to Indy. Any suggestions for fun things to do or places to eat? And can we hang out with you?

I actually know some small cities like Indy and Mobile, Alabama fairly well because I go there every year for the NFL Combine and the Senior Bowl.

Downtown Indy is very centralized and walkable, though it's too bad it's going to be super cold there this weekend. The most well-known restaurant to visit is St. Elmo's Steak House. It's touristy, but it is also legitimately very good. Obviously, they have steak (duh), but they're actually more well known for their shrimp cocktail. If that's the route you want to go but can't get in, there's a sister restaurant right next door called Harry and Izzy's. I think it's worth hitting up either spot if you're probably not going to be in Indy again anytime soon.

There's also a part of the city loaded up with more eclectic options called Meridian-Kessler. That's a short Uber/Lyft ride away. Downtown is circled in blue. Meridian-Kessler is the section outlined in red. 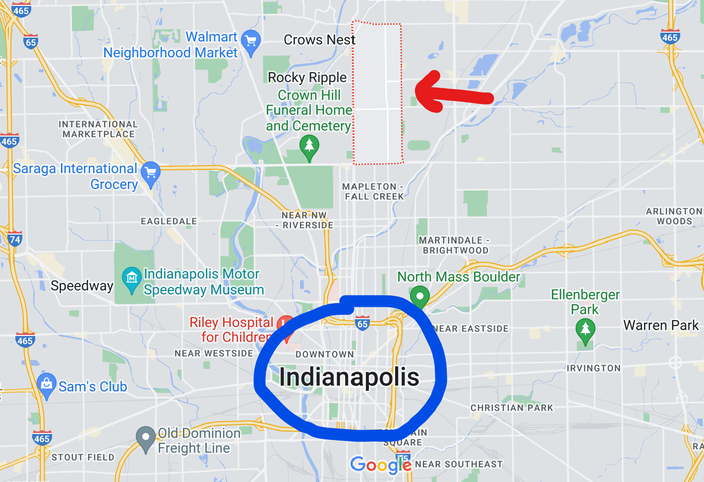 I'd hit up a restaurant up there if you have time.