Eagles-Packers: A look at the odds 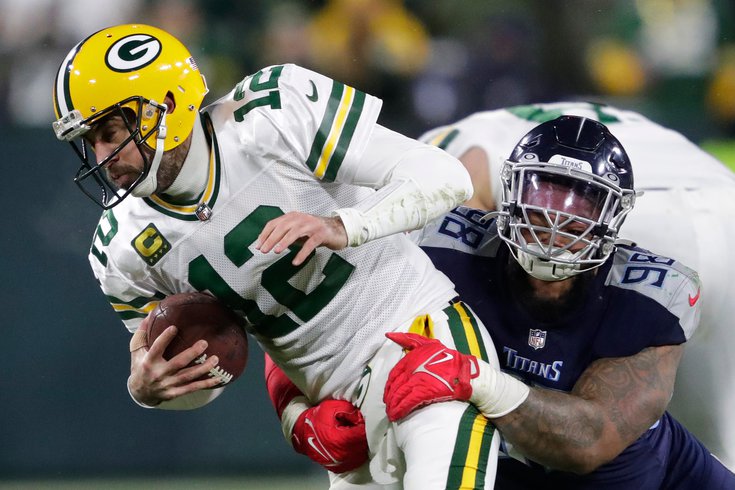 Aaron Rodgers and the Packers aren't doing so hot these days.

The Eagles are back in the win column thanks to a 17-16 comeback over the Colts, while the Packers, after a brief respite from a victory against Dallas, went back into free fall Thursday night with a 10-point loss to the Titans.

The Eagles aren't perfect by any means right now, but after failing to really get anything going against Washington in their first defeat two weeks ago, they're at least back to finding some sort of way to win in the end – Plus they did a pretty decent job shutting down the run game with Linval Joseph and Ndamukong Suh, even though they had only been with the team for a few days.

As for Green Bay, well,  they definitely don't look like the team that made it to back-to-back NFC Championships  just two years ago anymore, nor the ever-contending Super Bowl threat they've been for the past several. The offensive talent has been spread severely too thin and Aaron Rodgers has been showing his age.

And if the Packers do show flashes of greatness, they don't last long.

So, understandably, the Eagles, still with the best record in the entire league at 9-1, are the favorites going into the primetime matchup Sunday night at the Linc.

Here's a look at the odds across several sportsbooks:

The last time the Eagles and Packers saw one another was December 6, 2020 at Lambeau, the game that marked the unofficial end to Carson Wentz's run in Philly and the beginning of Jalen Hurts'.

The Eagles were falling apart that year and after a lifeless first half, former coach Doug Pederson had enough and yanked Wentz, who had been bad that entire season, for their, at the time, second-round rookie. They still lost to Green Bay, 30-16, but by that point, the Eagles were out of it anyway, even in what was a comically weak NFC East that year.

The Packers, meanwhile, were trying to cash in on that last championship window with Rodgers under center (or trade him, those rumors were all over the place the past couple of years) but never got those last pieces to do it.

Now the trajectory of both franchises are in dramatically different places.