Eagles practice notes, August 19, 2015: No fights on the field, but one on the sidelines 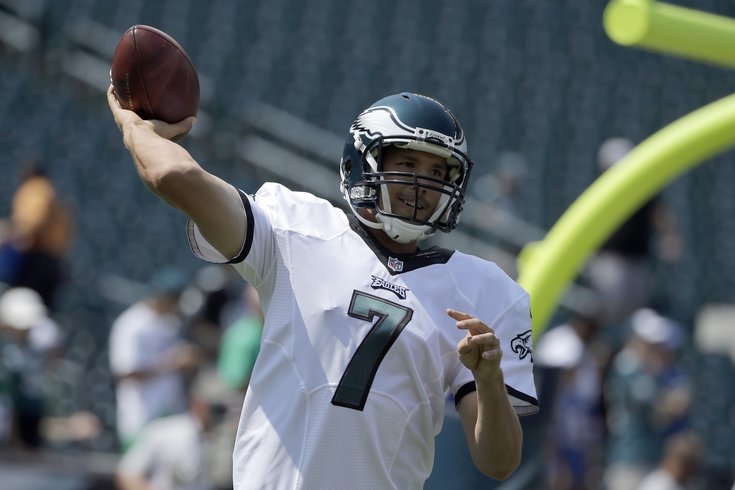 Sam Bradford moved around a little better today. Sort of.

Today was the first day of joint practices between the Eagles and Ravens, and while there were no fights on the field, there was nearly one on the sidelines. We'll get to that at the end of the post here, but first, practice notes:

• If you've read me here, I've said that Sam Bradford has barely moved during training camp. Today, I saw more bounce in his step during his dropbacks than I've seen to date. However, I should note that on one play he tried to climb the pocket when he sensed an outside rush, and it was, um, sloooow.

• Nolan Carroll had a good day. He forced a fumble against Ravens WR Darren Waller, had a few pass breakups, and just generally covered well all day.

• Byron Maxwell also showed today why the Eagles paid him. In 1-on-1's he did a great job jamming Steve Smith at the line. Smith was able to get free and make a short catch, but he was dominated in the first second or two of the play, which is all you need.

• Walter Thurmond also played well. He had an interception and a nice return after the pick. There is no question at this point that he will start Week 1, barring injury. There never really was a competition there, but if there was, it's over.

• I also thought Denzel Rice impressed today. The Ravens tried to take him deep twice during 1-on-1's, but he did a great job locating the ball in the air, while leaning into the receiver as he ran with him down the field. That's called a "look and lean," which Rice executed perfectly.

• Eric Rowe had a rough day. In 1-on-1's he was roasted a few times by the short and shifty Michael Campanaro. That's a bad matchup for Rowe. While I think Rowe will eventually be effective jamming receivers at the line on the outside, he's going to struggle against shiftier guys who get free releases in the slot, and that showed on the field today. He was also beaten on a deep back shoulder throw to Steve Smith, as well as a fade pattern to Jeremy Butler. The one redeeming play Rowe made today was when he was beaten by Steve Smith in the end zone, but Rowe didn't quit on the play and jarred it loose before Smith clearly had full control of the catch.

• Andrew Gardner did a nice job in 1-on-1's against a variety of Ravens pass rushers. He ran with the ones once again today. I think it's a safe bet to consider Gardner your new starter at RG.

• On the second play of 11-on-11's, Bennie Logan blew up a run play in the backfield, like he did multiple times against the Colts. Bennie could be in for a big season. What Logan does so well is get his hands up faster than the blocker opposite him. Watch his hands against the Ravens this Saturday. Hands are such an underrated part of line play, but that's where Logan is winning right now.

• The Ravens' QB jerseys are the worst. It's impossible to see their numbers, and there really isn't much difference between the QB jerseys and the regular Ravens uniforms. It's like they're begging for Brandon Graham to destroy Joe Flacco.

Ravens have black QB jerseys, not bright red. Not much of a difference from their regular dark purple jerseys. pic.twitter.com/xn5psxb5H0

• A number of you have asked why Bryan Braman doesn't get more playing time with the regular defense, considering he's so disruptive on the punt block team. Bryan explained the difference between rushing the punter and rushing the quarterback. "Most of the time the punt protection team is made up of a lot of linebackers, and smaller guys, who are not really accustomed to blocking," said Braman. "At my position, at outside linebacker, I'm accustomed to rushing against 6'5, 6'6, 320 pound men. So when I'm put up against a linebacker who is uncomfortable in a blocking position, it makes it a little easier for me to move them."

• Cody Parkey continues to struggle after missing a PAT and a short FG attempt against the Colts. He had misses today from 32, 42, and 47.

• There were no fights between the Eagles and Ravens today, but there was a near fight between two local radio hosts on the sidelines. 97.5's Mike Missanelli and WIP's Josh Innes got into what looked like a heated discussion that had to be broken up by Eagles security. I saw the incident, but was not close enough to hear what was said. Rob Tornoe of Philly.com and Kyle Scott of CrossingBroad.com both have breakdowns on what was said during the near altercation. From Philly.com:

Then, as Innes recalled to Ike Reese and Michael Barkann, “I took off my sunglasses, looked him straight in the face and said, ‘your show f’ing sucks.”

That caused Missanelli to aggressively move toward Innes, who backed away before Eagles security intervened and separated the two.

“Yeah, he stepped back and wet himself just like he did months ago when Gargano confronted him,” said Missanelli.  “Anybody can be a tough guy behind a microphone.”

“I’m not afraid of the guy, but why am I going to get in the fight,” said Innes. “He’s a typical meathead bully who can’t settle things with his words.”

I've never met Missanelli or Innes, nor have I ever appeared as a guest on either of their shows. I also believe that if you're a grown man and you're fighting in public over ratings, you are a clown. So there are no real winners here, well, except for me and the other media guys who got to watch this nonsense. In other words, I have no dog in this fight.

However, if I'm piecing together what I saw and what was said back and forth per Tornoe, Innes insulted Missanelli, and when Missanelli gave him a little head fake, Innes basically ran. From a 60-something year old. That he outweighs by 150 pounds. He moved nearly as quickly as Bennie Logan, too. So Innes can talk as tough as he'd like, but it looked a little bit like this: